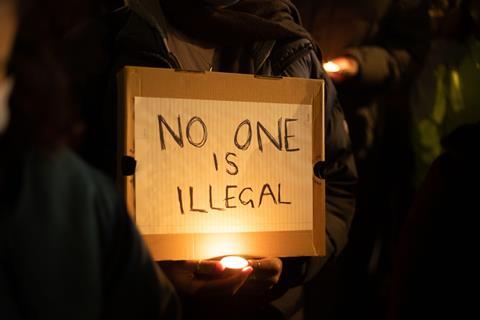 Growing up in India, I remember slowly realising that not everyone in my country was treated the same or as equals. Depending on their birth - and sometimes color of skin - some of my friends were not allowed to go into the houses of wealthier people or even into some public places, such as places of worship. On the other hand, friends who belonged to families from higher castes that were often wealthier and had better social standing were treated better.

Because the caste system was not abolished by law during India’s independence, many people are still given preferential treatment over others because they were born in the right caste.

This is obviously not right, but it is how much of the world operates. Human discrimination is still the curse of societies, including parts of Europe and Arica. What is most tragic, though, is to see countries that chastise those who deprive others of their human rights behave the same way.

Britain’s new asylum resettlement plan is a prime example. Earlier in May Prime Minister Boris Johnson announced a new scheme to process asylum seekers, whereby anyone entering the country without permission will be relocated thousands of miles away to Rwanda for processing. The first batch of asylum seekers have arrived in Rwanda even as the European human rights court has halted sending any more asylum seekers.

Meanwhile Britain - like many other European countries - has opened its doors generously to Ukrainians fleeing the war in their country. The British government has even announced it will pay families who provide housing for these refugees a monthly stipend. This is good and affirms basic human values.

Of course, the world should do as much as possible to help the people of Ukraine who are suffering unjustly because of Russia’s invasion. But the irony is not lost on many who can see the double standard that Britain is applying in its immigration policies. Whether intentional or not, the fact that the Ukrainian refugees are predominantly caucasian raises questions as to whether race played a role in the making of this law. A recent report has demonstrated that immigration laws in the UK that were in place for more than 30 years were designed to reduce the number of black or brown people.

The sad truth is Europe does not have a stellar record when it comes to refugees. We should recall how it responded to the refugee crisis in the wake of the Syrian war -though some nations, such as Germany, did respond positively despite some political backlash. Europe’s cold reception to Iraqi refugees, many of them from religious minorities who fled during the height of ISIS’ reign of terror, was equally troubling, especially since Western nations owe their Christian roots to them.

Britain cannot ignore its Christian civilisational roots in this case and must handle the complex problem of illegal immigration in a more humane and just way. Thankfully important British leaders are raising their voices against this move to send asylum seekers to Rwanda.

The Rwandan government’s complicity in the scheme - from which it is expected to profit immensely - only adds insult to injury. A former colony of Germany and Belgium, Rwanda is intimately familiar with the disastrous consequences of preferential schemes. After all, it was the Belgian colonial government’s decision to split Rwandans into Tutsis and Hutus that led to the unspeakable violence of the genocide in 1994.

In her seminal book Caste: The Origins of Our Discontent Isabel Wilkinson deftly clarifies that the root of inequality all over the world is a caste-based worldview that determines the worth of people based on their birth. Now, ethnic identities do have their virtues. They often help determine community belonging, whether to a nation or a more tribal form of family identification. But when it moves beyond that to determine worth based on occupation, color, religion or birth, we quickly slide into polarisation and hate.

This is why casteism often informs racism: what truly matters is who occupies the seats of power and privilege in a given context and how fundamentally they view human equality and dignity.

Prime Minister Johnson claims that Britain’s new scheme will save lives by deterring human trafficking and smuggling. What he fails to realise is that this policy punishes innocent people more than human traffickers or smugglers. Traffickers are merely opportunists who prey on the vulnerable. The scheme does not solve the problem of providing asylum to those in need - it only puts more obstacles in the way.

The British government should be aware that, beyond setting up a poor example on human rights and dignity, it is playing with fire. If nations and societies begin to focus on taking care of their own identities based on birth, then we should not be surprised if it emboldens xenophobia in its own shores and abroad.