10 sayings you didn’t realise came from the Bible

Convinced you’ve heard that saying before? Nope, it’s not Shakespeare, says Paul Kerensa, it comes from the Bible. There’s more wisdom there than you might realise 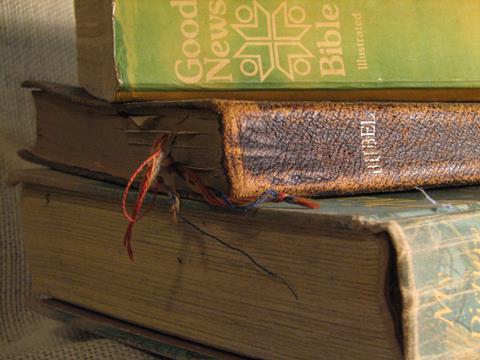 I read my Bible. I do. But occasionally it surprises me with an unusually modern piece of language that I’m convinced was from Shakespeare or Game of Thrones. But no, it’s been there all along, giving wisdom to our ancestors – and now to us.

I’ve not discovered anything too anachronistic. There’s no Old Testament mention of the iPad (although there are a few apples). I’ve found no references to Wall Street (although Pharaoh’s daughter went to the bank of the Nile to draw out a little prophet).

But there are plenty of phrases with genuine biblical back-stories. Here are a few:

I’ve faced a few of these in my time. But the first to encounter them were the people of Leviticus. “Do not curse the deaf or put a stumbling block in front of the blind, but fear your God,” so says Leviticus 19:14.

Perhaps we think of ‘blocks’ as modern – a Lego block, a tower block or blockchain (whatever that is). But the first stumbling blocks were simply rocks: an agricultural, biblical turn of phrase, like ‘scapegoat’ or ‘wolves in sheep’s clothing’.

2. The blind leading the blind

Maybe it sounds modern because criticising leadership is a timeless habit. But it’s Matthew 15:14 where we’re first told: “If the blind lead the blind, both will fall into a pit.”

3. Giving up the ghost

I was convinced that this was Shakespeare – he loves writing about ghosts, from Banquo to Hamlet’s father. But this phrase is from the King James Version (Luke 23:46; John 19:30). Here Jesus commends his spirit to God, before “he gave up the ghost”.

Before it was a Harry Styles song or even a Prince album, Jesus told the Pharisees and Sadducees that they “cannot interpret the signs of the times” (Matthew 16:2-3).

Other musical/biblical crossovers include The Prodigy’s The Fat of the Land (Genesis 45:18), David Bowie’s ‘Ashes to ashes’ (Genesis 3:19) and Queen’s ‘Another one bites the dust’ (Psalm 72:9).

Even atheists must admit Jesus had a way with words. He didn’t just deliver wisdom but painted pictures, leaving us with something memorable and world-changing. “Put your sword back in its place… for all who draw the sword will die by the sword,” so says Matthew 26:52.

Jesus quotes this proverb in Luke 4:23, reminding us to heed our own advice before critiquing others. Rabbinical teaching has similar versions, like the ancient Jewish text Genesis Rabbah, from 300-500 AD: “Physician, physician, heal thine own limp!”

7. Queen of the South

Perhaps the only Scottish football team to take its name from the Bible. The original Queen of the South was the Queen of Sheba (Matthew 12:42; Luke 11:31). As for ‘The arrival of the Queen of Sheba’, now a popular composition by Handel, she visits Solomon in 1 Kings 10.

Alright, the full phrase isn’t biblical. But without the parable of the talents, the TV show may well have had a different name.

When Jesus spoke of a ‘talent’ in Matthew 25:14-30, it was a unit of currency worth 6,000 denarii. Each denarius was a day’s wage, so one talent would take twenty years to earn – arguably as long as it may take to learn a skill for Britain’s Got Talent.

In the parable, the servants who use and grow their given talent (as money) are rewarded, while the one who buries it is punished. So we are taught to use our God-given skills, not hide them.

Not a sleepy place of dreams, nor a magical place in a children’s story (that’s Noddy in Toyland). This is Cain’s place of exile (Genesis 4:16), where it’s said he built the first city. On rock and roll, sayeth rock band Starship.

The Quick and the Dead is a not-bad western starring Sharon Stone and Gene Hackman, perfectly titled – in westerns, quick and dead are pretty much the only options.

But its first use in English was in Tyndale’s 1526 Bible, where you’ll find it in 2 Timothy 4:1. Here ‘quick’ actually means ‘living’. Part of the Apostles’ Creed, it tells us that Jesus will come to judge all, living and dead.

Other biblically inspired film titles include Red Dragon (in Revelation 12:3 long before it was a Hannibal Lecter film) and The Ten Commandments. Did you know that comes from the Bible too?