The Queen was perhaps the most visible – and admired – Christian in British public life. But how will her son’s faith influence his rule? Tim Wyatt reports 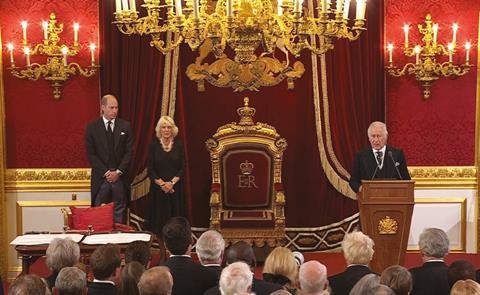 The new King’s first address to his subjects was, in large part, a tribute to his late mother. King Charles III spoke of a “life well lived” and her kept promise of “lifelong service”.

But amid the eulogy came a perhaps unexpected line: “The role and the duties of monarchy also remain, as does the sovereign’s particular relationship and responsibility towards the Church of England – the Church in which my own faith is so deeply rooted.”

His words were a reminder that as well as inheriting a constitutional role, Charles was also stepping into a religious one. But what of his own personal faith?

The first hints of the then-prince’s thoughts on religion came more than two decades ago. In an interview with the BBC, he mused it might be better to amend the traditional title of Defender of the Faith to, simply, Defender of Faith.

Every English king or queen since Henry VIII had taken the title, but Charles suggested he would prefer to defend faith generally, in a nod to the decline of Anglicanism and the more religiously diverse nation he would one day lead.

His comments provoked a firestorm, with some commentators denouncing the idea as tantamount to disestablishment or a betrayal of Britain’s Christian heritage. In 2015, Charles clarified he would stick with the traditional Defender of the Faith title upon his coronation. But his remarks gave a glimpse into the new King’s attitude to spirituality.

“He did get a lot of stick for the Defender of Faith thing,” said George Pitcher, an Anglican vicar and former journalist. But in the decades since, Charles’s view – and that of the country’s – had mellowed, he suggested.

In 2012, the Queen told a gathering of multifaith leaders at Lambeth Palace that the Church of England’s role was not to “defend Anglicanism to the exclusion of other religions” but “to protect the free practice of all faiths in this country.”

That dovetails with what our new King was trying to say then, says Pitcher, and continues to say now. In his first meeting with more than 30 leaders of various faiths at Buckingham Palace, King Charles III reaffirmed his own faith and committment to the Church of England.

But he also spoke of a “less formally recognised” duty and a personal conviction to provide space for individuals to follow “other spiritual paths, as well as those who seek to live their lives in accordance with secular ideals.”

According to his own website, Charles is a “practising Anglican” who is “profoundly attached to the traditional rites of the Church of England and to the Book of Common Prayer”.

One senior Anglican figure who declined to go on the record but has prayed with Charles, said Christians should be assured that he “is a deeply spiritual man with a personal Christian faith that will equip him to be an excellent king”.

Clearly, the monarch’s life has seen ups and downs, most notoriously a failure to live up to Christian teachings on marriage in his first union with Princess Diana. But all reports since confirm a picture of a man who is genuinely and authentically a follower of Christ.

Charles’ grandmother, Princess Alice, was a remarkable figure who – after protecting a family of Jews during the Nazi occupation of Greece – founded an order of Orthodox nuns. He has made several pilgrimages to Mount Athos, one of the holiest monasteries in Orthodoxy, and is believed to have added Orthodox icons to the chapel at Highgrove House.

But he also has a keen interest in Islam and Judaism, having studied both faiths and spent time with imams and rabbis. “The future surely lies in rediscovering the universal truths that dwell at the heart of these religions,” he once said. “All I have ever wanted to do is build bridges that span these chasms.”

As Prince of Wales, Charles would often send handwritten letters to government ministers, lobbying them on issues from military procurement to EU directives on alternative medicines. Alongside his eclectic range of interests, we can add faith and, in particular, the persecution of Christians.

Since Middle Eastern believers began to come under attack from Islamist militants a decade ago, he has regularly met with Orthodox Christians in the UK and urged more action to protect the persecuted Church, forcing the often-neglected issue up the public agenda.

As sovereign, he will have to temper his opinions. But Pitcher hopes Charles will not feel silenced by the crown and will continue speaking out on moral issues, as he did earlier this year on the deportation of asylum seekers to Rwanda. “I’m glad [he]wasn’t afraid to call them out on that,” he said.

“It’s in keeping with his role as Defender of the Faith; it’s the job of Christians to stand in the corner of the oppressed and the marginalised.”

But as with so much of the new King’s spiritual side, there remains a lot that is unknown. Will he use his Christmas speeches as the Queen did to unashamedly point people to Jesus Christ? Can he use the platform of the throne to advocate for his religious passions without alienating a secularising nation?

King Charles III has, in many ways, an impossible job, coming immediately after such a beloved Queen, acknowledged Pitcher. “She’s a very tough act to follow in respect of her Christian faith, which was river-deep and hugely prayerful.

“I think he’s more than willing to give it his best shot. And I think we need to be generous-spirited in accepting his commitment.”

Listen to the episode of the Premier Christian Newscast where we talk about King Charles: