Will Covid empty the pews? 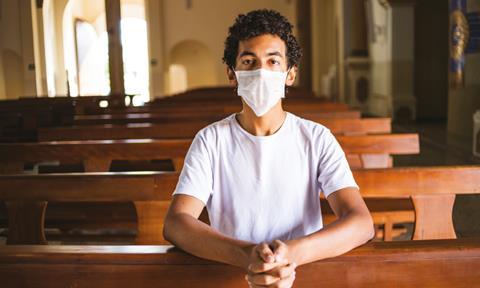 The 19th Century evangelist, Dwight L Moody, once said that “church attendance is as vital to a disciple as a transfusion of rich, healthy blood to a sick man”. Yet in-person churchgoing (the only kind most Christians previously knew) has seen almost as many doomand-gloom headlines in recent years as Covid itself. And a recent survey does little to counter that picture.

According to research from Premier and World Vision, 32 per cent of 18-34s who used to attend church monthly don’t plan on going back as regularly. The picture is even worse when looking at the 35-54 age bracket. 36 per cent are reluctant to return, meaning the Church’s existing problem of attracting young families is only set to worsen.

Pete Phillips, Premier’s head of digital theology, believes that the break in physical meetings, forced by multiple lockdowns, triggered other significant factors. Our usual routines overturned, some of us got used to not being together, and going back hasn’t appealed. “This is what Covid has done,” Phillips says. “It’s repressed some people’s appetite for on-site engagement.

“Hopefully as the pandemic declines – if it declines – this will get more stable. But one of the rumours going around is that people prefer the convenience of online, because they can watch church whenever they want to if it’s livestreamed or pre-recorded. They can fit it into their lifestyle better.”

Peter Lynas, the Evangelical Alliance’s UK director, has been musing over the same issues. The Alliance’s Changing Church report showed very similar figures. On a snapshot Sunday, average attendance was down by nearly 32 per cent. “It’s not as simple as 32 per cent have walked out of church,” Lynas clarifies. Speaking to church leaders, he has found that roughly ten per cent have left, ten per cent have moved and ten per cent were attending online instead.

Of the ten per cent who have left, Lynas says: “We have probably knocked nominalism on the head. And although I’d rather those people were in church, it’s not the worst thing in the world.”

Lynas, like Phillips, is worried by changing habits: “I know lots of families [that] were committed but are now struggling to get back and haven’t figured out what their journey looks like.”

Claire Burton is project manager for Care for the Family’s Kitchen Table project. In response to research which shows that only 50 per cent of children who grow up in Christian homes keep their faith into adulthood, they offer resources to help parents inspire faith at home.

Burton suggests that outdoor sport, often taking place on Sundays, attracted a lot of Christian families when things started to reopen: “We were all in isolation and outdoor sports opened up before anything else. Some parents were therefore prioritising that, and just got out of the habit of attending,” she says. “We see people who are definitely committed to our church, but who don’t come to every Sunday meeting.

“I wonder if we were all so busy before the pandemic in church and [when Covid happened] people reclaimed some of their lives and thought I am happy to re-engage but I have different priorities now,” she says.

As a mother of two children herself, connecting with other families in her church became a lockdown priority. Burton noticed that while some families dropped away, others found the crisis forced them to reconnect, because they saw it as make-or-break time. Relationships between families in her church were fostered over Zoom, often using Care for the Family resources.

According to Burton, the goal needs to be relationships, not bums on seats on Sundays. One woman she knows lost her husband just as the pandemic hit, then had twins. “She wouldn’t have been able to come to an in-person service,” she says. “But we have connected online. It’s about reaching people, ultimately.”

Burton is keen to point out that the Kitchen Table project is intergenerational: “It’s the old lady in the church asking how their exams went. It’s the teenager they look up to. All of that builds faith for a child. As parents, we are not just in it for ourselves. Looking at how we can connect kids in is crucial,” she says.

If online services haven’t been engaging enough for families, perhaps they need to evolve from a temporary emergency measure to something far more strategic and interactive? Phillips agrees that online church needs to up its game: “One of the core things is that we need online church to be properly sacramental, to have God at the very centre,” he says. “Not just presenting a viewing experience; we need accountability so that the pastoral team is aware of who is coming and who is not and act on that, like you would for onsite church.”

Phillips believes that digital church is here to stay, and that ‘hybrid’ forms of church could emerge as the ideal mix between the two. This is great if it is done well, meets needs and if leaders can keep up with the intensive demands of both the online and offline world. But that’s a high standard for already-struggling leaders, many of whom are thought to be on the verge of burnout.

PEOPLE ARE STILL COMMITTED TO OUR CHURCH, BUT THEY NO LONGER COME TO EVERY SUNDAY MEETING

There’s a theory that the pandemic has simply sped up pre-existing trends. Before Covid, many high streets were losing the battle to online shopping, some of us were already working from home and the Church was struggling to attract young families. Covid didn’t create those problems. But it has exacerbated them.