Should the Church pay reparations to atone for slavery?

In looking at how the UK Church profited from slavery, calls to put right a wrong are growing this Black History Month. Should financial reparations be considered, and if so, how would funds be allocated? Tim Wyatt investigates 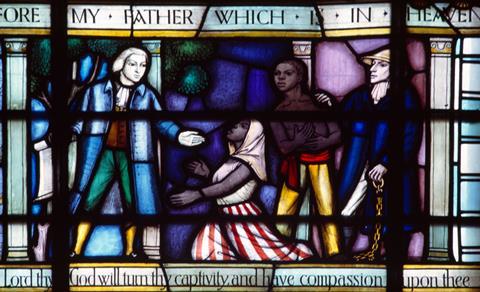 “This abominable trade took men, women and children created in God’s image and stripped them of their dignity and freedom. The fact that some within the Church actively supported and profited from it is a source of shame… This is a moment for lament, repentance and restorative action.”

Those were the words of the Most Rev Justin Welby, Archbishop of Canterbury, earlier this year when it emerged that the Church Commissioners – who manage the Church of England’s £9bn endowment fund – had historic links with the Transatlantic slave trade. Research found one of its predecessor funds had invested in companies which owned slaves, as well as receiving donations from people who profited from plantations.

The findings were only the latest episode in an unfolding story. British churches are delving into their dark pasts and finding that, time after time, their institutions, finances and leaders were enmeshed in the repugnant trade of human beings.

In many ways, it has been a long road for churches to begin to confront their unpalatable histories. Richard Reddie, director of justice and inclusion at Churches Together in Britain and Ireland and author of several books on slavery and racism in the Church, said little of the recent revelations were new: the information had been suppressed for a long time.

“The church never had a problem in talking up its credentials to end the transatlantic slave trade. But I’ve always been aware of the other side of the story, the first half of the story. That’s the unsavoury side that churches feel less inclined to talk about.”

For every William Wilberforce, there was also a Christopher Codrington, a wealthy businessman who left his Caribbean sugar plantations, complete with hundreds of slaves, to an Anglican mission society in his will. Many of them were later branded with the Society for the Propagation of the Gospel’s name. Codrington College – which was built on his land using money earned from the unpaid labour of his slaves – remains the main Anglican theological college in the Caribbean to this day.

Jason Roach, an Anglican vicar and director of ministries at London City Mission, said that, as a black Christian, it was always painful - even if unsurprising - to discover that the Church he loves and serves was complicit in slavery.

He recently discovered that one CofE diocese had used money extracted via slavery from his own parents’ country of origin to build some of their churches. “This is the Church that I feel like I belong to,” he said. ”I feel part of and, at the same time, there’s this complexity that I can’t quite understand but is filled with evil…that’s affected people who are close to me.”

Some Christians have criticised trawling through archives to expose historical sin, arguing that digging up centuries-old links between the Church and slavery does nothing to tackle the issues that black Christians face today.

But Reddie has little time for this argument, noting that the same logic has never been applied to churches trumpeting their history of abolitionism. “I’m a Christian – I believe the truth sets you free. You can’t tell half the story and then ignore the other half,” he said.

Exploring the Church’s role can only provide a richer understanding of who black Christians are, he insisted, as well as demonstrating the faithfulness of our God of justice.

Roach agreed, saying that while no Christian today defends slavery, “I think it’s unquestionable that the way that our thinking has been shaped in the past affects our thinking in deep, often subconscious ways, even now.”

For both Roach and Reddie, the primary response to the Church’s troubled past must be deep lament. But far too often, we have skipped straight from apology to reconciliation. Lament must first lead to repentance, Reddie said, which meant turning away from sin and pursuing a different path. “What’s always missing is this sense of justice: it’s cheap grace.”

Here, his words (perhaps unknowingly) echo those of Justin Welby: “This is a moment for lament, repentance and restorative action.”

Increasingly, more and more activists, pastors and even ordinary Christians are arguing that repentance and restorative action must result in something more concrete – reparations.

As with much of our current racial justice moment, the impetus for reparations came from the other side of the Atlantic. In recent years, growing numbers of American churches, theological colleges and Christian institutions have admitted their predecessors owned and profited from slaves.

The US and Canadian branch of the powerful and influential Jesuit order of priests has pledged $100m in reparations to the descendants of those enslaved by Jesuit bodies. The world-famous Princeton theological seminary has set aside at least $27m, with millions more promised from the Catholic university, Georgetown, and several other prominent Christian colleges.

Money was never given to the slaves who were freed, but instead to the Church, state and monarchy

Several Episcopal Church dioceses – the sister church of the CofE – have also begun setting up their own reparation funds, with some lobbying for a bill which would establish a federal reparations commission.

Although the movement picked up momentum after the killing of George Floyd in 2020 and the wider reckoning on racial justice that his death prompted, church-led reparations are not actually a new idea. One prominent civil rights activist interrupted a wealthy New York City church service in the 1960s to demand redistribution of their historic wealth, while the World Council of Churches made its own reparations call back in 2007. But it has a new urgency in recent years, especially in America, where a shocking number of churches and Christian institutions actually owned their own slaves.

Here in Britain, even with the sense of transatlantic distance from the murky business of trading in human lives, more and more churches are being forced to consider the question of reparations. Earlier this year, the Quakers agreed  to make financial and practical reparations for their forebears’ entanglement in slavery.

The demands are particularly pressing on the Church of England. In 2020, the head of an official commission considering reparations on behalf of Caricom, a union of 15 Caribbean nations, said the CofE must join the conversation. “Apologies are not enough,” Sir Hilary Beckles, a noted historian of slavery and chair of the commission said. Caribbean people continued to suffer harm as a result of the legacy of slavery and the Church must enter into a “reparatory process”, he argued.

The issue has also gained force beyond the Caribbean too. Largely unnoticed during this summer’s Lambeth Conference of global Anglican bishops was a call to explore using the CofE’s £9bn assets to fund “redemptive action and reparation” elsewhere in the Communion, in an effort to address the Church’s links with colonialism and slavery.

The pressure is clearly growing, but are reparations even feasible? Roach noted the idea has biblical precedent in the story of Zacchaeus, who pays back everyone he swindled as a tax collector four times as much. But it was hard to draw exact theological parallels between that passage and our present conversation around slavery, he said.

Given the distance in both time and geography between those harmed and those who committed the damage, it was “very, very complicated” to work out what a modern-day re-enactment of Zacchaeus’s act might look like. Even if an agreed amount of cash could be detached from a church’s income or assets for reparations, who would be chosen to receive the money and how would it be given to them? And even if the modern-day descendants of slaves could be identified, how could you fairly calculate, in pounds and pence, the damage caused by the legacy of slavery?

These issues have already bedevilled attempts at reparations in the US where, in some dioceses, committees examining the issue have been running for more than a decade without finding consensus on a way forward.

These complexities and hurdles help explain why forms of reparation other than direct financial redistribution have gained more momentum. Several universities and colleges have chosen to establish scholarship funds or bursary schemes for Black students as a way to offer recompense for past involvement in slavery. One pioneering suburb outside Chicago has given black residents, who were previously excluded from the mortgage market by racist policies, money for home improvements or as a down payment on a new property.

Roach said he probably favoured these kinds of reparatory schemes; providing future opportunities for those whose ancestors were denied them in the past. In the Church, this could look like more money spent on recruiting ethnic minority students into theological colleges. Reddie suggested spending church funds on helping Black pupils excluded from school re-enter education or training as a way of rebalancing the historical playing field.

A huge transfer of wealth from the rich, mostly white, Western Church to the global south might sound progressive, Roach said, but ran the risk of perpetuating power imbalances. Far too often, the Western Church has been in the position of giving – whether money, authority or theology – and not receiving from its Black and Brown brothers and sisters. “At the root of reconciliation is recognising that I’m looking in the eyes of someone who’s made in the image of God, who can bless me as much as I can bless them,” he said.

Reddie noted there were plenty of other, less contested forms of repentance and recompense that the Church could also pursue; most notably backing the long, and so far unsuccessful, campaign to build Britain’s first permanent memorial for the victims of the slave trade.

But he added it was vital not to sweep the difficult and sometimes awkward financial side of reparations under the rug. After all, money played a huge role in ending slavery, with the British government paying slaveowners large sums of money in the 1830s to not resist abolition.

“Money was never given to the slaves who were freed, but instead to the Church, state, monarchy. So money has to be a part of it, but it can’t be the be-all and end-all.”