Jair Bolsonaro: How the ‘Trump of the Tropics’ won the backing of evangelical voters

As Jair Bolsonaro concedes defeat in Brazil's presidential election, we look at the controversial politician’s rise to prominence, and the Catholic faith that drives him 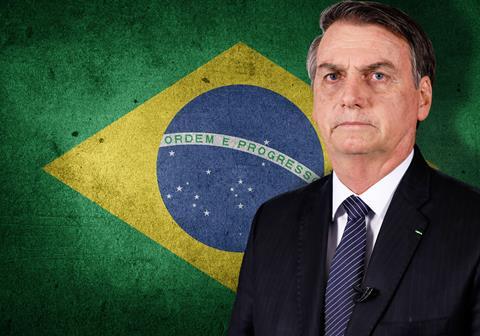 After nearly two days of silence, President Jair Bolsonaro, has acknowledged the results of the runoff election for President of Brazil, notably without conceding defeat or mentioning his opponent who won, Luiz Ignacio da Silva, known popularly as “Lula”.

In his brief two-minute speech, Bolsonaro evoked themes that have been the touchstone of his political discourse these last four years - God, country, family and freedom -as the core values of the right (which he broadly represents), while also appropriating key Brazilian symbols – “Order and Progress” from the Brazilian Flag and even the colors of yellow and green.

It was but the latest example of a growing trend of nationalist populist leaders who use the symbols of faith and nation to bolster their image and further their political agendas, even in the face of apparent defeat.

Who is Jair Bolsonaro?

Dubbed the 'Trump of the Tropics’ - a comparison appreciated by both men - Jair Bolsonaro, like his North American counterpart, is known for his fire-brand style and surprising rise to power after having marshalled evangelical support in 2018 through his invocation of conservative moral values.

Born and raised in a small town in the state of Sao Paulo, Bolsonaro joined the Army in 1977 at the height of the Military Dictatorship (1964-1985), which positioned itself against communist insurgencies rising up in the region (a theme which continues to haunt Bolsonaro even today).

After a brief stint in local politics, Bolsonaro was elected to Brazil’s Federal Chamber of Deputies in 1991, where he became notorious for his controversial positions and statements that were labelled misogynistic, homophobic and racist by his critics. He also frequently called for a return to the dictatorship.

Politically he remained largely on the margins until his surprise victory in the 2018 Presidential election.

Bolsonaro’s win in 2018 was attributed in large part to a late surge in evangelical support through official endorsement from some of its most influential leaders. However, his first connection with evangelical leaders came much earlier in 2014, when he made several incendiary statements about homosexuals in interviews, after the first gay kiss was broadcast on Brazilian television.

Although Bolsonaro is a Catholic, some evangelical leaders began to see him as a potential ally in the fight for “traditional family values”.

Flash forward four years and that alliance would become official: in a country where nearly 30 per cent of its 215 million inhabitants are evangelical, 70 per cent voted for Bolsonaro, many citing his support for “family values”, despite what some evangelical leaders noted as his “defects” (again, there are clear comparisons to Trump here).

In addition to these endorsements, Bolsonaro also relied on other symbols to bolster his image among evangelicals, most notably being baptised in the Jordan River by an evangelical pastor in 2018 (he later clarified he had not renounced his Catholicism).

However, many believe his greatest asset has been his third wife, Michelle, an evangelical who remained largely silent during his first campaign and presidency. Over the last several months, she has become increasingly visible, representing him in church services and religious marches, as well as growing her own social media presence in order to reach more evangelical women.

Bolsonaro’s evangelical support decreased in the 2022 election, due in part to widespread disapproval of his handling of the pandemic and other issues, including accusations of corruption. Polls leading up to the election had him struggling to break past 50 per cent of the evangelical vote.

Perhaps it is this struggle that led to the dramatic surge in incendiary religious accusations seen in the campaign, causing many to begin referring to the election as a “Holy War”.

Bolsonaro increasingly spoke of the choice between him and Lula as a choice between “good and evil”, while falsified videos of Lula with a well-known Satanist were circulated.

Bolsonaro also accused Lula and the left as planning to close churches and arrest religious leaders. Michelle publicly declared that the Presidential Palace had previously been consecrated to demons which had to be purged once Bolsonaro took office.

Lula responded by calling Bolsonaro a “Satanist” while some from his camp circulated falsified photos that connected Bolsonaro with the Freemasons and accused him of participating in cannibalism.

It’s been an absurd and disturbing development. Beyond merely the appropriation of Christian symbols and language to further political ends, we are now seeing their weaponisation.

Unlike Trump, Bolsonaro seems to have agreed to begin the transition of power without further accusations of fraud or challenges to the election. But it remains to be seen whether this 'Trump of the Tropics' will ultimately lay down his weapons, or if he will continue to wield them in his crusade against the left.