Keir Starmer’s apology for visiting a church is deeply concerning

It is utterly depressing that Keir Starmer should apologise for visiting a church on Good Friday, says James Mildred 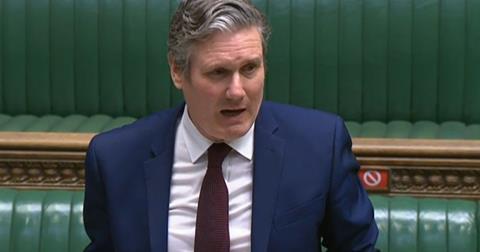 Sir Keir Starmer, the current leader of the Labour Party has apologised. For going to a church. On Good Friday.

Just let that sink in. It’s deeply revealing of where our society is.

For all the talk of pluralism, multiculturalism, tolerance and equality, for all the posturing about the value of free expression, the truth is some identities and beliefs and communities are more equal than others.

Starmer went to Jesus House in Brent. The church is part of a Nigerian denomination which holds to biblical beliefs about marriage, that is marriage between one man and one woman. This is the union described in the very first book of the Bible, Genesis, and pointed to by Christ himself. Sir Keir didn’t give any indication as to his own position concerning marriage, or any other aspect of Christian belief. All he did was thank the church for their willingness to play a part in the Covid-19 vaccination programme.

Yet, within hours, the social media backlash had begun. Voices within the Labour party attacked the church as a seat of ‘homophobia’ because of its evangelical stance. To quote from comedian Rowan Atkinson, Starmer was the victim of the ”digital equivalent of a medieval lynching mob, scouring social media for any evidence of indiscretion”. The tragic thing is, rather than standing up to the mob, he instead chose to cave in. He soon issued a grovelling apology for setting foot inside the church.

There are two things to say in response. Firstly, it’s utterly depressing that Starmer apologised. Why didn’t he come out and say he doesn’t agree with the church on marriage but he respects and is grateful for the good work it is doing? This was surely an opportunity for a leader to stand up to social media nastiness and make clear that Christians have every right to hold to and practice their beliefs. He could have taken a stand on the growing phenomenon of ‘cancel culture’ and pointed to the hypocrisy of groups seeking to shut down certain beliefs and opinions at the same time as forcing society to endorse their own. This is not what a free society looks like.

Secondly, it’s telling that those criticising the church for its beliefs about marriage had nothing to say about the great work it has been doing throughout the pandemic. The Church has been organising shelters, food banks and other practical initiatives to show the love of Christ to people who have been alone, afraid and without hope. Does this not matter? Why are those who despise Christian beliefs willing to attack and damage the Church, to diminish its ability to serve the last, the least and the lost purely because of their disagreement? Our society used to better at tolerating one another’s differences. Something has changed for the worse in recent years.

I do not think it’s credible to say that we’re living in a pluralist society any longer. When politicians cannot set foot in a Church, on the date of a key Christian festival, in a country with a rich Christian heritage, there is something badly wrong. Would Sir Keir have landed in such hot water if he had visited a Mosque, a Synagogue or a Temple where the community also believed same sex marriage is wrong? I highly doubt it. Christianity is the one ‘no-go’ area for politicians on the left and the right these days.

I do not think it’s credible to say that we’re living in a pluralist society any longer.

Of course we shouldn’t be surprised by this. Jesus himself told his disciples that they would “be hated by all because of my name” (Matthew 10:22). As his disciples today, we can expect to be opposed and persecuted. In our country, we have not yet been persecuted to the point of shedding blood, as many of our brothers and sisters are overseas. At the same time, we should not simply accept marginalisation and ill-treatment by society. The New Testament also highlights examples of the Apostles claiming their right as citizens of Rome to live out their faith without harassment.

It was wrong for Keir Starmer to apologise for visiting a church this month. As the church, we must demonstrate why this was the case by continuing to extend love to others, to serve communities and be a positive influence. In doing so, we will make it obvious to politicians and others that the Church of Christ is a blessing to society. And we must stand up for the rights to freedom of speech, religion and belief for all citizens.