An interview with Jesus

Jonathan Roumie reveals what it's like to play Jesus Christ in the groundbreaking TV series, The Chosen, and explains what an unexpected financial miracle taught him about surrendering everything to God 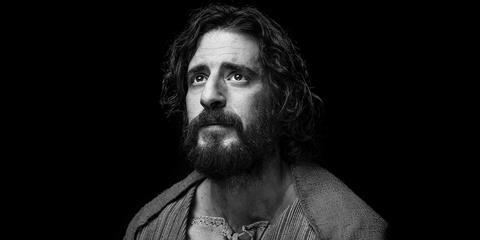 What is chiming with people so much about The Chosen, and the way you’re playing Jesus?

I think people are feeling that for the first time in a media portrayal of Jesus, they can actually relate to him. Most of the portrayals we’ve seen in cinema, are focused on his divinity, and because they’re telling the story in a very condensed and truncated period of time, there isn’t time to get into what Jesus’ personality and human relationships might have been like. They’re trying to condense 33 years into two and a half hours, whereas we’re trying to fit three years into 56 hours.

How do you get into the headspace of playing Jesus?

I usually end up praying a lot.

I land ahead of time and find the nearest church to make sure I get my prayer time in, the mass, confession and communion - all the things that fill me up spiritually and clean me up to be as open and clear as the Holy Spirit allows me.

I don’t hear an audible voice from God. But I get impressions. And if something strikes me as tonally odd, or maybe conflicting, I make sure I have a conversation with Dallas Jenkins, our creator, and he will give me his insights, which will usually clarify a lot of my questions. We keep the focus on making Jesus relatable and authentic. That’s the goal.

Do you ever have moments when you think, what am I doing playing Jesus? These are big boots to fill.

Every day, it feels too big. There’s no reason why I should be doing this. I’m in no way worthy to be playing this role.

When we were filming season one, Jesus is beginning to preach when the paralytic comes in through the roof. I panicked, and said, "Can we just slow down for a minute? I don’t feel worthy to be here saying these words.” And Dallas said, "None of us are worthy to be here doing what we’re doing. But we are here, because we’ve been chosen to tell this story and to bring it to the world.” That gave me a lot of comfort and confidence and reminded me that the enemy is constantly trying to try to assault me with insecurities and fears. Since that moment, whenever it feels a little too scary, I just stop and I pray. And I remember that this came to me by God’s design.

Do you feel God’s called you to do this?

Oh, yeah. 100%. I think God has been preparing me since I was 11, when I saw Jesus of Nazareth, the famous miniseries with Robert Powell, playing Jesus. I was so moved as a kid watching him go through the crucifixion, that I went outside in my backyard, and I built a life sized crucifix and a fake crown of thorns from my bushes. I reinacted the crucifixtion as a kid, I mean who does that? It wasn’t until I was performing a passion play for the first time - in 2018 - where all of a sudden I had this memory and I thought, Woah, this has come full circle. And then six months later, I was filming the beginning of The Chosen.

That's an incredible story - but your parents must have wondered what on earth you were doing?!

That’s the thing, I don’t remember them ever saying anything! I’m shocked the cops didn’t show up and say, "Your son is carrying around an instrument of first century Roman torture, is everything ok?"

How has playing the role changed your personal faith?

It's made me rely on him more. It’s brought me deeper into a relationship with him.

Three months before I got called to do this series I went through a very difficult time, financially and spiritually. I was struggling for the previous eight years in Los Angeles as an actor. I was on the verge of figuring out what else I could do. And then God showed me a miracle that made me realise that I had to commit my will to him.

What was the miracle?

I woke up, $100 overdrawn and $20 in my pocket - enough food literally for the day. I had been juggling six or seven side hustles without anything coming through. I had about a month’s worth of bills that were about to arrive and I had no idea what I was going to do. My credit was busted. And I literally cried out to God, and said, "God, if there’s something else that I should be doing, please show me. Because this is not an easy career. This is not an easy life. But you said, 'My yoke is easy, and my burden is light.' So take my burden." And I said all this out loud, which I think has a certain relevance. And then I left my apartment, probably to spend part of that 20 bucks on whatever breakfast I could find. I came back in the early afternoon and there were four checks in the mail. I didn’t understand what I was looking at. I thought this isn’t what I think it is. So to document it for posterity, I went up to my apartment, I put my phone on the bed, and I filmed myself opening each of these envelopes. And sure enough, each one was a check, each one bigger than the one before it.

I just wept, and I said, "Okay, that’s what it has to be. Complete and total surrender."

As if to make sure that the lesson was learned, a week later, I got another check. These were disparate, distant payments that should have been paid earlier for previous acting jobs. One of these checks hadn't paid out in five years - and I didn't even remember I did the job, but there it was staring me in the face.

God needed to take me to my personal lowest, until I realised, Okay, I just have to follow his lead. I have to let go of my idea of a career or the traditional approach to a career as an actor. My career wasn't working because I didn’t let him in on the process. So once I did, he changed my life.

We left Jesus at the end of series two, preaching the Sermon on the Mount. Where do we go next?

I think there might be a little more of that sermon that we can share. Other than that, I don’t know much more because I haven’t seen any of the scripts yet. So I’m just as curious as you are!

What I can say, is that the crucifixion doesn’t happen until season six and there's a total seven seasons. So we’ve got a few years to go, and I’m in it for the long haul, God willing.

To watch The Chosen, or to find out more information about the series, visit angelstudios.com/thechosen

Esther HighamEsther is a presenter on Premier Christian Radio. She has been dabbling in radio since her teens, and also spent a decade working in television production – starting out at children's BBC then going on to making documentaries for Channel 4. Now she juggles her time between Premier Christian Radio's Inspirational Breakfast, her film-making business and running around after their two school-aged children. She also leads worship regularly and runs a movie night at her local church. She is partial to cream teas, bonfires and spotty china, occasionally all at the same time.