When Canada’s most eminent writer, Margaret Atwood, released her much-anticipated follow-up to The Handmaid’s Tale, just a few weeks ago, hundreds queued outside bookstores in London. The Testaments is set 15 years after its forerunner and, according to The Guardian, sales have already doubled that of any other hardback novel released this year. Demand for Atwood’s dystopian vision even hurtled The Handmaid’s Tale back into the paperback charts in second place, 34 years after it was first published.

The iconic image of the Handmaid has been used in protests all over the world to represent the disempowerment of women. The phenomenal interest in the books is a credit to the 79-year-old prolific writer, but Atwood’s depiction of fundamentalist Christianity can make for uncomfortable reading.

The Handmaid’s Tale was published in 1985, the year before I was born. When I studied it at school I was enthralled, partly because of its distance from reality; its theoretical horror. A world in which women were restricted completely; where they were forbidden from reading or writing, owning property or handling money seemed deliciously unlikely in the 21st Century, or at least safely shut behind the annals of history; it made fertile ground for a teenage imagination. But when I picked it up again in 2016 (just a year before it first reappeared in the bestsellers’ list) the story was less beguiling and more prophetic. ISIS had rolled through Iraq and Syria two years previously and set up a caliphate based on a barbaric interpretation of Sharia Law. Stories of Yazidi women being held as sex slaves were splashed across most British newspapers. Meanwhile, in America, Donald Trump was installed in the White House despite the publication of an audio recording of him bragging about sexually assaulting women. Furthermore, the polls suggested 80 per cent of white evangelicals voted for him.

Describing her reasons for writing the sequel, Atwood said it was the messages she had received from readers wanting to know more about the mechanics of Gilead, as well as her own ruminations on the changing political landscape. She wrote in the acknowledgements at the back of The Testaments that there are no details in the novel which haven’t had a precedent in human history.

Atwood’s bestselling series is set in the Republic of Gilead: a fictional America reborn after a successful coup replaces the government with a fundamentalist Christian group called the ‘Sons of Jacob’. The second book in the series traces the stories of three women: Agnes, born and raised inside the repressive theocracy; Daisy, a Canadian teenager with a mysterious link to Gilead; and Aunt Lydia, one of the regime’s female enforcers and controller-in-chief of the “women’s sphere”.

Gilead is a terrifying totalitarian state in which scripture and, more specifically, the Old Testament, is used to justify the systemic subjugation and abuse of women. The wider context is an environmental disaster that has led to a fertility crisis. In an attempt to address the infertility epidemic and also to stifle sin, the Sons of Jacob have masterminded a world in which women’s fundamental value is in the reproductive capabilities of their bodies. The irony is: in their attempt to sustain humanity and purge it of evil they have birthed a world that is far darker than its predecessor.

In Gilead, Commanders (all men) control people’s lives and make laws based on scriptures they have cherry-picked to accommodate their vision. Brutal rules and laws are enforced by the Guardians and the Eyes (also all men), and punishment for infringement is severe: beating, maiming, torture, stoning or hanging.

Senior Commanders are rewarded with a Handmaid to add to their household made up of a wife and several Marthas (female servants). It is their duty to ‘copulate’ with their Handmaid once a month in a bizarre ceremony intended to invoke the biblical story of Rachel and her handmaid Bilhah (Genesis 30). If a child is born to a Handmaid, the baby is taken away and presented to the Commander and his wife as their own. The Handmaid is swiftly moved to another home to get pregnant again. The systematic rape of Handmaids is justified in Gilead because these are ‘fallen’ women from the ‘time before’ (women who were in relationships outside of wedlock or second marriages, for example). Under Gilead’s warped theology their sins will be ‘redeemed’ through pregnancy and childbirth.

In Gilead, women are viewed as chattel unworthy even of a name (they are called OfFred and OfWarren, for example, to signify which Commander they belong to). They are married off in prepubescence, mostly against their will (although they are forbidden from expressing these feelings). And they wear specific colours depending on their class to make them instantly identifiable: wives in blue, Marthas in green, Handmaids in red and Aunts in brown. They must have their hair covered at all times outside of the home.

Somebody reading The Testaments with little or no knowledge of the Bible may come to the conclusion that Gilead is a critique of Christianity, or worse, that Christianity is fundamentally repressive. Gilead is steeped in religious language and the Bible is used to justify the most abhorrent acts. At one point in The Testaments an Aunt reads the story of the Levite and his concubine from Judges 19 to the young women in her care. Rather than explaining the context of Judges (that there was “no king”, and so “everyone did what was right in his own eyes”, Judges 21:25), the verses are used to frighten and subdue the women; as one of the Aunts explains: “This story is God’s way of telling us that we should be content with our lot and not rebel against it.”

A Christian reader will notice the subtle ways that scripture has been twisted and manipulated for vested interest in Gilead, in particular the way in which Genesis has been interpreted with no mention of the authority and dignity God bestowed upon women at the start of creation. When Agnes finally gains access to a contraband Bible for herself, she discovers that there is more to Judges 19 than the Aunts were willing to share. Her friend Becka also says, with incredulity: “They leave things out. It says in the Bible we’re in God’s image, male and female both.”

When Atwood was interviewed by Esquire magazine about this aspect of her novel, she said: “In most patriarchal systems, men don’t want women to read the Bible because then the men in charge can declare what’s in it and no one can check up on them. They’re in charge of the word of God. That’s the model of Gilead because they don’t want women claiming any authority.”

It’s interesting that in both The Handmaid’s Tale and The Testaments most of the protagonists cling to a desire for God and even pray in private despite the negative portrayal of God’s character and their own dire circumstances. Gilead hasn’t managed to eliminate real personal faith and neither has Atwood sought to discredit faith in general. In fact, the author suggests that Gilead is not a true representation of Christianity. The underground resistance in both novels, for example, is heavily made up of Christian groups. Catholics are found hanging on the executioner’s wall in The Handmaid’s Tale (for resisting the Sons of Jacob), and Quakers help smuggle women across borders to Canada in The Testaments. Christians with a genuine faith are depicted as those willing to sacrifice their own lives for their beliefs or to help liberate others.

Atwood has said that her novels are less a critique of religion and more an indictment of those who use it to gain power over others, and many have chosen to read The Testaments in particular as a criticism of Trump’s America and his acquiescence to the evangelical right.

For example, some have suggested similarities between the US and Gilead with its repealing of abortion laws in many states and its separation of mothers and children at the Mexico border.

Interestingly, Atwood has dismissed the idea that Trump is recreating Gilead. “That’s not true. If it were, we’d not be having this conversation,” she told Esquire. “He’s not even a particularly Gileadean figure, more like a Nebuchadnezzar of the right. That guy went mad.” 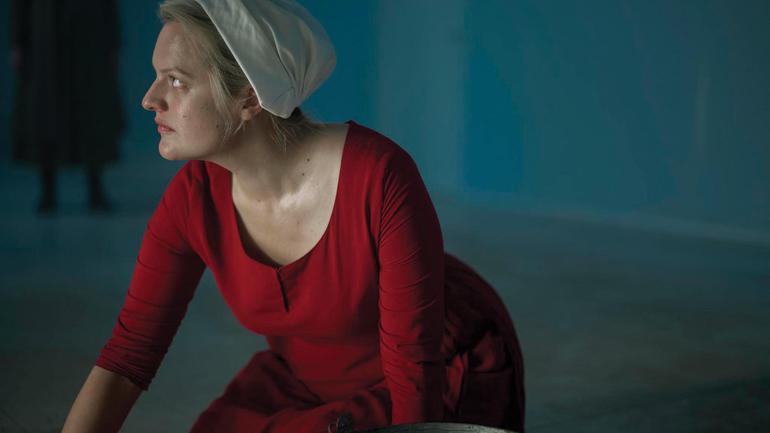 While changes in American politics may have influenced Atwood – she told an American chat show host that Trump’s election in 2016 “encouraged” her in the writing of the book – I can’t help but think Gilead has more in common with certain repressive Muslim nations than with Christianity. Sex slaves, head coverings, public hangings, mutilation as punishment for wrongdoing, women as the property of men. These are all reminiscent of fundamentalist Islam. The Gilead missionaries even use language such as “filthy infidel”.

But despite the religious themes and exploration of fundamentalism, The Handmaid’s Tale and The Testaments are ultimately less a warning about faith and more a warning about how easily democracies can be dismantled. A year after The Handmaid’s Tale was published, Atwood sent a letter explaining to one reader what the novel was about. In it she said: “Like many books, The Handmaid’s Tale began with the question, What if? I guess I was tired of having people say: ‘It can’t happen here.’ They were right only if you accepted their definition of ‘it.’”

‘It’ could mean Russian-style communism or Germany under Hitler, but what if we were looking at the wrong ‘it’; what if while we were busily staring down the wolf at the door, another one was creeping over the back fence? Once any democracy starts curtailing freedom in the name of freedom, it may land us in trouble. What if you wanted to take over the US today? What flag could you wave successfully? The Handmaid’s Tale is one answer to these ‘What ifs?’ And it goes on from there.”

We’ve had many decades of stable democracies in the West, but lately, even in our own country, we’ve seen attempts to undermine political institutions and parliamentary processes. Atwood’s novels are a prescient warning for Christians to be sober-minded and resist evil, especially when it comes in the guise of religion.

The Testaments by Margaret Atwood (Vintage) is out now