Is Jordan B Peterson the saviour of Christianity?

It all seemed to be going smoothly. Could I book Jordan Peterson for an interview about his new book? “Yes,” said the publicist. “He’ll be in the UK soon and his diary is fairly free.”

However, as the date approached, my allotted time began to be whittled down. The publicist couldn’t quite believe how much interest there seemed to be in the relatively unknown Canadian psychology professor and his new book 12 Rules for Life: An antidote to chaos (Allen Lane). Numerous media outlets were vying for his time and two hastily booked lectures at a 1,000seat venue sold out within hours. The events were packed out, not by crusty academics, but by young male professionals.

I still managed to bag an hour with the increasingly in-demand author in the form of a discussion recording for my Unbelievable? show. Peterson would be appearing opposite atheist psychologist Susan Blackmore, the first in a special video series called The Big Conversation.

However, one of the next appointments in Peterson’s diary turned out to be an interview with Channel 4 News presenter Cathy Newman, whose inquisitorial style often leaves politicians flustered. But when she challenged Peterson over his views on the gender pay gap, the psychologist’s cool dismantling of her combative assertions left Newman (literally) speechless. The interview went viral, with millions of views on YouTube, and Peterson was launched further into the celebrity stratosphere.

Now you can’t escape him. A multitude of blogs, opinion pieces and interviews have been spawned, interrogating his new-found fame and the ideas he brings with him. He’s coming back to the UK again this month for a debate with the atheist Sam Harris. The venue? The O2 Arena. Capacity: 20,000.

How has Jordan B Peterson suddenly become the rock star of public intellectuals? Why are so many young men following him? And why should Christians care?

Peterson first entered public consciousness in 2016. A psychology lecturer at the University of Toronto, he was popular with his students, but relatively unknown beyond the confines of academia. However, when Canada enshrined new laws, which potentially criminalised anyone who refused to address transgender persons by their preferred pronoun, Peterson objected in the strongest terms.

The professor says it wasn’t about being anti-transgender rights. His concern was about the state criminalising the use of language – the first step towards an Orwellian-style tyranny, in Peterson’s eyes.

His public protest (delivered via YouTube) landed him in trouble with university authorities and campus protest groups. Videos circulated of Peterson being shouted down by angry students who accused him of being a stooge of the alt-right.

Yet, while his political and social values may be right of centre, Peterson denies any association with the fascism of the alt-right. He says he’s defending classic liberal values of academic liberty and freedom of speech.

Meanwhile, he sees the growing popularity of identity politics among groups defining themselves by sexuality, gender and race, as a form of “cultural Marxism”. According to Peterson, “men and women are not the same”, “Islamophobia is a word created by fascists and used by cowards” and “the idea that women were oppressed throughout history is an appalling theory”. Needless to say, these statements (and others like them) have caused outrage in some quarters.

Peterson is an intense personality who weighs his words carefully and isn’t afraid of pausing to think before speaking. He rarely smiles for the camera and there’s not much small talk to be had (unless the philosophy of Dostoyevsky counts). It all cultivates the image of a wise mentor. Peterson’s legion of young male fans hang on his every word, and treat him like a modern-day sage.

Going against the flow of political correctness may have earned Peterson an audience, but his continuing connection with them still needs explanation. Perhaps the greatest mystery of all is his admiration for the power of religion and his endless fascination with the Bible.

Any reader expecting a secular approach to psychology in his book 12 Rules For Life may be surprised by Peterson’s constant references to the Bible and Christian beliefs in the search for meaning and purpose in life. Equally, they might not expect a set of public lectures on the psychological significance of biblical stories to draw a sell-out crowd, but when Peterson booked a theatre for that purpose, it was standing room only.

No wonder so many Christian leaders have taken notice of Peterson and his overtures towards Christian faith. Young males are precisely the demographic most absent in our churches. Peterson has exposed an existential-spiritual itch among millennials, and is scratching it for all it’s worth. A generation of young men, searching for significance and unsure of their identity, have latched onto him as a surrogate father figure to help them find their way in life.

Peterson’s life lessons are couched in the language of biology, psychology and theology, yet are also disarmingly simple. For instance, he may draw on the emotional significance of the Genesis account of Cain and Abel (a story so deep he describes it as having “no bottom”), but the instructions dispensed are still “clean your room, bucko” and “put the things you can control in order”.

Such advice may not seem radically new, but it has galvanised his followers. It’s not unusual for the academic to be greeted on the street by men who say: “You’ve changed my life.” Even ardent atheists have reported a new respect for religion. One young sceptic reported: “So this atheist, who agrees nearly entirely with the conclusions that Peterson draws from the meaning of the stories of the Bible, is currently wondering whether I am an atheist at all.”

A generation of young men have latched onto him

Comparisons have been made to the muscular Christianity that led so many young men to follow church leader Mark Driscoll at one time. But Peterson isn’t an academic version of Driscoll, nor is he a conventional Christian by most accounts.

Peterson has consistently refused to be pinned down on his personal religious convictions. When I pressed him on it, he described himself as a “religious man” who was “conditioned in every cell as a consequence of the Judaeo-Christian worldview”. The closest I could get to whether he really believed in God was that he lives his life “as though God exists”, saying: “The fundamental hallmark of belief is how you act, not what you say about what you think.”

Which leads to the question of what Peterson actually believes about the unique claims of Christianity. Doubtless he reveres its contribution to the world. He’s quick to critique anti-religious atheists such as Richard Dawkins, saying: “They just don’t take it seriously enough. They don’t contend with the real thinkers.”

Indeed, Peterson has found more common ground with spiritual seekers like Russell Brand (both have appeared on each other’s podcasts) than with his celebrity atheist interlocutors. When I moderated Peterson’s dialogue with atheist psychologist Susan Blackmore, she verbalised the frustration of her peers. Peterson clearly believes in a scientific account of evolutionary psychology, yet marries it with a fervent admiration for Bible stories that leaves many sceptics scratching their heads. 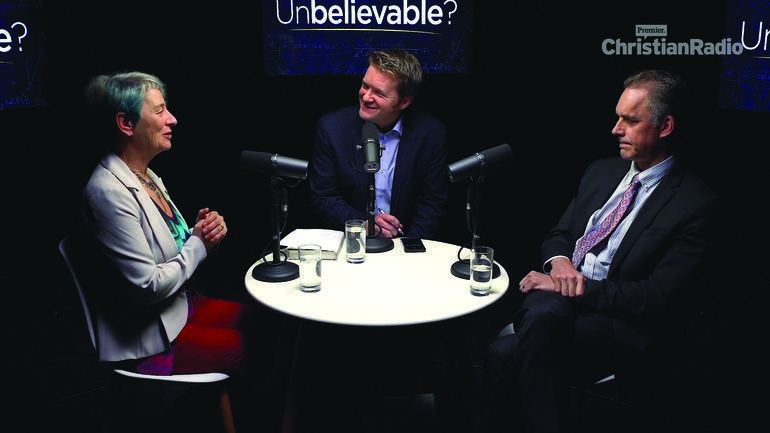 But Peterson is unapologetic, stating that, “the biblical texts are foundational”. For instance, he believes the creation narrative in Genesis 1, in which God creates man and woman in his own image, is fundamental to our belief in the intrinsic dignity and equality of humans.

Likewise he strongly endorses the effect of Christianity on the world, writing: “Christianity elevated the individual soul, placing slave and master, commoner and nobleman alike on the same metaphysical footing, rendering them equal before God and the law. It’s nothing short of a miracle.”

But is it true?

Is Jesus really the divine Son of God, or is Christ only a symbolic “archetype” (one of Peterson’s favourite Jungian terms) who represents the perfection of the human condition? Peterson, for whom psychological myth is just as important as physical fact, might argue that it’s not necessary to distinguish the two. But most Christians are likely to disagree. Theology isn’t the same as psychology.

Some are also wary about embracing the theological outworking of Peterson’s take on Christianity. Practically speaking, it boils down to a pull-yourself-up-by-your-own-bootstraps philosophy (‘Stand up straight with your shoulders back’ is the first rule in his book). You could argue there’s a lot of law and not much grace.

So perhaps it’s best not to attempt to get any systematic theology out of Peterson’s body of work (and he himself disavows any claim to be doing theology). But, allowing the book to be what it is – a self-help manual – there is a lot of common sense wisdom in his approach. A rugged acceptance that life is often painful, but that sacrifice, honour and virtue are worth fighting for. I found his advice on parenting especially practical and wise.

If it’s not already obvious, Peterson isn’t the saviour of Christianity. The job of saviour has always belonged to Jesus and will continue to do so. But, he has been called a “gateway drug” to orthodox Christian faith, and it’s easy to see why. There’s nothing wrong with regarding him as a friend of the faith. A popular voice that champions Christianity in the intellectual firmament is a rarity, and we can be encouraged that “whoever is not against us is for us” (Mark 9:40).

And the intellectual exploration of faith looks far from over for Peterson. By his own admission, the endless depths of the Christian story in scripture seem to be nothing short of miraculous.

When he writes: “I knew that the cross was simultaneously the point of greatest suffering, the point of death and transformation, and the symbolic centre of the world”, it feels as if Peterson is reaching well beyond mere psychology to ultimate reality.

There’s a lot of common sense wisdom in his approach

When asked by Catholic broadcaster Patrick Coffin back in February whether he’s ready to assert belief or disbelief in the historical resurrection of Jesus, Peterson replied: “I need to think about that for about three more years before I would even venture an answer.” Since then, Peterson (who is a frequent Twitter user) has tweeted a link to an article defending the historical case for the resurrection.

At the end of The Big Conversation, Blackmore pointedly asked Peterson: does he really believe Jesus was the unique, divine Son of God, who performed miracles?

He responded: “How about this?  ‘Render unto Caesar what is Caesar’s and unto God what is God’s.’ – that’s a miracle. That’s the separation of Church and State in one sentence. So there’s a miracle for you.”

Perhaps it was as close to an affirmation of faith we are likely to get from the enigmatic professor. For now, Peterson seems to be on his own journey of discovery towards the meaning at the centre of everything.

The Big Conversation is a video series featuring world-class thinkers across the Christian and atheist community. For the full debate, further videos, bonus content and the Unbelievable? newsletter visit thebigconversation.show