'I gave my homosexuality to God'

I grew up in Australia and had an amazing childhood with two wonderful parents. I was a very spiritually sensitive person; always asking the deeper questions of life. But I found the Christian world deeply uncompelling. Coming out at the age of 14 and facing the fact that I was exclusively attracted to men – the Church really signified a space that wasn’t safe for me.

I had relatives who had strong views on homosexuality and would say things that were disparaging. All I really saw was moral codes that I had to live up to – “you have to be this, in order to be accepted and loved by God”. I thought, “I’m in this category of people that can’t do that, and so I hate this religion because it deletes me out of existence.”

I was sitting in a park age 14 with one of my boyfriends, and we were kissing. A man pulled up on a motorbike, raised the visor on his helmet, picked up this large brick and threw it onto my back. I remember this rage and anger within me, at how such homophobia and hatred could exist in our society. I connected my experience of Christianity with that act of throwing the brick against my back. Christianity became the thing that was in the way of progress and of gay rights.

I had this idea that I’d have a gay partner and a poodle and adopt an orphan from China and live in this alternative suburb and life would be wonderful. But I found that there was this vacuum in my life and something was missing. I was at the Christmas lunch table with my aunt and uncle, and I’d previously been in a gay love triangle that had collapsed. My aunt and uncle were the crazy fundamentalists that actually believed this Jesus stuff. I just got stuck into, “You Christians think you know the absolute truth – that’s ridiculous!”

I was asking apologetics questions to my uncle in a very emotional way! He intellectually defeated me! So I said, “You’re not gay, so deal with that!” It was my final objection to Christianity. And then he said, “Well, David, the truth is a person I know, not a concept in my head; his name is Jesus Christ.” I just stormed out of the room, I was so furious. Then my uncle leaned over to my aunt and said, “I see the Holy Spirit over David – and in three months’ time, he’ll be saved.”

Three months later, I was in a pub in central Sydney for a friend’s 21st birthday. I saw a girl there who was a filmmaker. I wanted to interview her for the student publication. I said, “What inspired you?” and she said, “God” – to which my face scrunched up.

She said, “Do you think there’s a God?” and I said, “I definitely think there’s something, but not this oppressive Christian colonial construct.” She said, “It ultimately comes down to Jesus Christ – what problems do you have with Jesus?” I said, “Everyone loves Jesus, he was obviously one of the most amazing human beings that walked the face of the planet…But it’s clear the Bible is against homosexuality, so I’m disqualified from a relationship with God.”

I was weeping healing tears

She said, “I don’t usually do this, but I really feel the presence of God so strongly right now. Would you mind if I prayed for you?”

She launched into the Christian prayer of the century, using words like ‘blood’, ‘Spirit’, ‘the cross’…it was all very weird to me. I went into this eternal moment, and I felt like time stopped around me. I felt this tingling sensation on the top of my head, and then it was as if someone was pouring a vial of oil over my head, and it was going all the way through my body. It was the most incredible spiritual experience I’ve ever had in my life – it was just so beautiful.

I heard a voice say to me, in my spirit, “Do you want me?” I said, “Yes.” I saw a veil over my heart and a pinprick of light going through the veil, and I felt someone breathe breath within me. I said to her, “I’m breathing without breathing, what’s happening to me?” And she said, “You’re being born again.” I heard a voice say, “Will you accept my Son Jesus as your Lord and Saviour?” I felt this massive tug of war over my soul for about five minutes while she was praying for me. Finally I said “yes” and that was when the love of God was poured out all through me. I was weeping healing tears.

I got home; my mum was waiting up. I said to her, “I think I’ve become a Christian.” She started yelling, “Hallelujah!” and said, “God’s the God of the impossible; I said to him if he saves you, then I’ll know that he’s the God of the impossible, because you were impossible, David.” She told me all about the prophecy from my uncle; it was just completely dumbfounding me that there was this whole divine conspiracy that had been worked out by God. 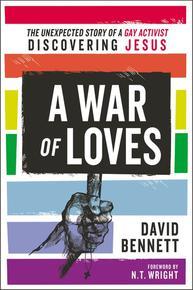 It’s been a long journey, in terms of reconciling my faith and sexuality. I came to a point where I had to become poor sexually, to inherit the kingdom of God. I believe scripture lands on the side of the orthodox traditional perspective. But that doesn’t transform people. For me it was getting the law to be written on my heart – not just understanding the law in my mind. And that was a long process as I gave my homosexuality to God.

The thing that worries me the most for the Church today is the notion that if we compromise our holiness – if we compromise our view on sexuality – then the people will be evangelised more easily and more people will come to Christ. I cannot iterate how wrong that logic is. In that pub, I sensed the holiness of God. If we remove holiness, that’s when we’ll see people turning away from God, not towards him.

God loves gay people, He loves the LGBTQI community, and he wants to know them, and I feel called to be someone who articulates and proclaims that. If you are gay, that cannot separate you from the love of God. God is not going to put a burden that’s too heavy for you to carry. God loves you and that is an unconditional offer.

David Bennett was speaking to Sam Hailes. David’s book A War of Loves (Zondervan) is out now. Read our review here.