The prayer meeting that brought down a government?

Reflecting on the unexpected impact of the recent Parliamentary Prayer Breakfast, Andy Flannagan says the event should remind Christians that when it comes to politics, integrity and character really do matter. And we all have a part to play 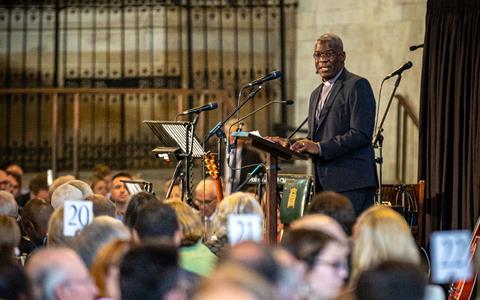 Recently, I had the privilege of leading worship at the now infamous Parliamentary Prayer Breakfast in Westminster Hall at the Houses of Parliament. As I drove home that evening, I could still feel the after-effects of God’s irresistible presence in that room.

I knew something powerful had happened but, at that point, I didn’t know how the seismic events of the next few days would play out.

That morning, I had pointed out to those gathered that it is not often you get to sing ‘Angels in the heights adore him’ while angels, sculpted into the magnificent roof of the hall, are actually staring down at you.

The sculptures were put there to remind all those who work in parliament where ultimate authority lies. It seemed more folk than ever were glimpsing that truth. It was the largest number of parliamentarians (190) that we’ve ever had at the breakfast.

During the hymn ‘We seek your kingdom’, they sang: “Peace, truth and justice reigning everywhere / With us be present in our public square / Fill all who lead with your integrity / Transform, revive and heal society.”

Never had those words seemed so pertinent. Later, after Rev Les Isaac’s stirring sermon, we led a time of reflection and response inspired by the prophetic cello playing of Lucy Clasper. There was a tangible electricity in the room. (Watch the livestream video for yourself here.)

It led to us singing an unplanned song over the crowd, as we felt there was so much pain, damage and division that needed God’s healing: “All of these punches land / Bruises from broken hands / Bind our wounds / Tend to us / Steep our hearts / In your love.”

More than a few MPs told me afterwards that it was the first time in years they had had time to stop, turn off their phones, take a breath and reflect in the midst of beauty.

It’s amazing what happens when you are on your knees before the one who knows it all. You realise that you don’t know it all and, as even a shred of humility comes, remarkable things can happen – as Sajid Javid can testify.

Within hours of the breakfast, he’d handed in his resignation, telling the BBC: “I made my decision then, sitting there listening to [Rev Les Isaac’s] sermon, and I just thought, it’s about integrity, it’s about a duty. If you haven’t got confidence in the boss, you owe it to yourself and the country to tell the boss nicely that you can’t serve and that was it.”

However, we shouldn’t be naive, buying into the pantomime villain narrative regarding Boris Johnson. This is not a time for whooping (or tears) but a time to be encouraged by this shift to keep praying and offering ourselves.

Let’s not forget that this is a story of collective ethical failure. And before we point too many fingers we should remember, as the 18th Century philosopher Joseph de Maistre famously said: “Every nation gets the government it deserves.” This is a time for humility from all of us.

The Church does not have a monopoly on integrity, as some of our recent and past history clearly demonstrates. Admitting our mistakes is a prerequisite for humility.

The theological idea of Imago Dei taken from Genesis 1 reminds us that we are all made in the image of God, designed to reflect him to the world: “Then God said, ‘Let us make humankind in our image, after our likeness’ (vv26-28, NET).

This is true whether we are believers or not. Quite simply, if we are made in the image of God, we are called to govern because he governs. And we are called to do so in a way that represents him to the world.

If you believe your leadership position to be part of a holy call to represent the divine image, rather than something you deserve because of your schooling, skills or intelligence, you are more likely to hold it in its proper place. There is a higher chance of integrity and accountability; of stepping into the kind of leadership that Jesus modelled.

We’re told in John 13 that our saviour was fully aware of the power he held: “Jesus knew that the Father had put all things under his power, and that he had come from God and was returning to God” (v3). If I had such incredible power, I would want to throw my weight around in righting wrongs and immediately setting everything straight.

But listen to how Jesus used his power: “…so he got up from the meal, took off his outer clothing, and wrapped a towel round his waist. After that, he poured water into a basin and began to wash his disciples’ feet” (v4-5). The word ‘so’ is key. The word is not ‘despite’. The very awareness of his power was what compelled Jesus to serve.

In fact, the word ‘integrity’ comes from the same root as the term ‘integer’, meaning a ‘whole number’.

In the run-up to the US elections, Christians have sometimes employed the phrase: “We’re electing a president, not a pastor” as justification for electing politicians whose private lives – and public – appear ethically questionable.

But, as we’ve seen, time and time again, we cannot disconnect ethics and integrity from leadership. Don’t we want our business, sporting and political leaders to hold the highest principles and not just ‘get the job done’? Leaders set the tone for a business, church or country by their conduct as well as their legislation.

A misreading of one of Jesus’ famous responses to the Pharisees has not helped our faulty sacred-secular divide: “Render unto Caesar what is Caesar’s and render unto God what is God’s” (see Mark 12:17).

It’s all too alluring to relax into the simplicity of letting Caesar take care of taxation, broadband and bin collections, while God looks after prayers, hymns and invisible things. But these are not two separate domains. Jesus was saying that Caesar has a small area of delegated authority within God’s overall authority.

He was clear that Pilate would have no authority but that which was ‘given…from above’ (John 19:11). Jesus affirmed human authority while reminding us where it ultimately comes from, just like those angels in the roof. If he is in authority over both the invisible and the visible, it’s pretty clear he cares about how things are done as well as what is done. 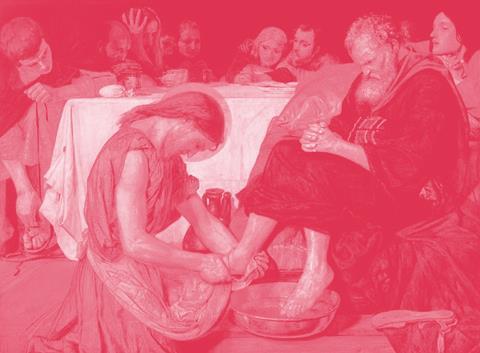 For many years, as I preached at various Christian events and festivals, my work in politics was often met with the response: “That’s great you’re involved, Andy, but those politicians – they’re all the same – it doesn’t matter who we vote for.”

But there aren’t too many people saying that now. In the midst of Brexit, Covid and Partygate, it has become abundantly clear that it really matters who is in charge. The impact of political decisions on our individual lives has gone from abstract to up close and personal.

Previously independent people have been told to “stay at home”, or that certain travel options (and even food products) are not easily available. It has underlined the importance of thinking carefully about who we elect, and whether people like us should get involved to try to improve the political gene pool.

For years, something told us that integrity should be important in our leaders. But the logic of: “If they make a success of the economy / get Brexit done / sort out climate change, I don’t care what they do in their private life” often dominated. We sheepishly put those thoughts about integrity to one side.

Then a crisis hit. When a government is making life and death decisions on our behalf, we need to be able to trust them. In any relationship trust is built by an accumulation of promises fulfilled and truth spoken.

As some world leaders discovered, if you develop a reputation for doing the opposite, then when you need to communicate something very important (and perhaps unpalatable), the wheels come off. Of course, the reality is that governments are always making life and death decisions, but for many of us, our relative prosperity insulates us from the impact of those decisions.

If you look at the biographies of past prime ministers, you will see that it was not policies or manifestos that defined their legacy, but how they responded to world events. Margaret Thatcher and the Falklands War, Tony Blair and weapons of mass destruction, David Cameron and Brexit. Looking for godly policies simply won’t cut it. We need people of humility and integrity in the hot seat. Character matters.

We need leaders who put a high value on truth, so that when they look us in the eye and tell us something we don’t want to hear, we can believe that our sacrifice is serving the common good.

We need leaders who treat the individuals around them with respect and empathy – as they are much more likely to lead the nation with the same attitude. Let us never again enter into the delusion that private and public are disconnected realms.

In short, we need leaders of integrity. And, at Christians in Politics, we are wondering if you might be one of them. As believers we aren’t perfect, but we do have constant access to someone who keeps us humble and points to a better way.

As church members, we learn incredible public speaking and organisational skills. As those involved in community projects, we often know as well as anyone the challenges in our communities. And I often see the Holy Spirit giving people an ‘X-factor’ that marks them out from the crowd.

Come join us. It won’t be fast and it won’t be easy. But your faith will be stretched and you may well see miraculous things happen. What happened at the recent prayer breakfast in parliament should build our faith and convince us that more miracles will be possible when our posture before God is right.

We are called to follow Jesus as image-bearers of the great ruler. We won’t necessarily be successful for him (though we pray for that too!), sometimes it will look like losing. But if our metric is that Genesis 1 calling, rather than just ‘getting things done’, we might just be OK with that.

There’s nothing more annoying than when people point fingers, calling for others to have more integrity and humility. But there’s nothing more beautiful than people wrapping towels around their waists and getting stuck in to serve.