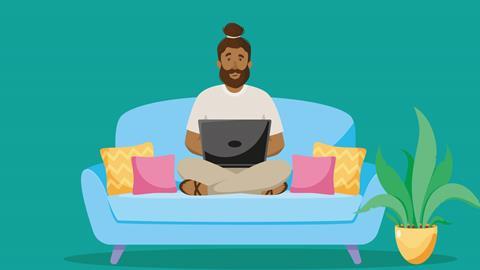 Jesus was a troll

Now, what kind of a statement is that? You are probably already wary of this title, assuming the headline is clickbait to catch your eye and hook you in. That’s what clickbait does to you. It piques your interest. But once you’ve clicked and read, it turns out to be palpably fanciful, or a trick. But this is no trick. I really am going to argue that, during his earthly ministry, Jesus was a troll.

Of course, I mean ‘troll’ in the internet sense of the word, rather than the living-under-a-bridge, eating goats sense. Neither troll types are flattering ways to be described, since online trolls have a reputation for being vicious, petty and nihilistic. So to call Jesus a troll might seem rather  troubling, or downright blasphemous. But let me explain…

WHAT IS A TROLL?

Online harassment and bullying is not trolling. It’s harassment and bullying. Most trolls are bullies and are prone to this kind of behaviour. At heart, much of this stems from loneliness, a desire for attention or the buzz of feeling superior. But Jesus did not behave in this way. He was not lonely, being in perfect fellowship with his Father in heaven. His superiority was not in doubt. And Jesus did not need the attention. In fact, Jesus could grab all the attention he wanted, given his miraculous power. What is surprising is that, even when he used those powers, he often went to great lengths to not court attention because of them.

So if Jesus wasn’t a bully, an attention-seeker or looking to lord it over people, in what way could it be argued that he has anything in common with today’s internet trolls? To explain that, we need to look at exactly what defines a troll. Here’s one definition from Jay Irwin, a moderator of that controversial vipers’ nest of opinion, 4chan. A troll is: “A person who causes discord for their own amusement, especially due to another’s emotions or naiveté.” The Urban Dictionary says that trolling is deliberately “making random unsolicited and/or controversial comments on various internet forums with the intent to provoke an emotional knee-jerk reaction from unsuspecting readers to engage in a fight or argument”.

The best definition, though, comes from an interesting commentator, anarchist and writer, Michael Malice. Granted, his name is not promising, but his definition of trolling is much more helpful if we’re keen to separate out harassment, bullying and, erm, malice. Malice says: “At its best, trolling turns a target into an unwitting and unwilling performer for the sake of a broader audience.” Essentially, trolls say things that will make some of the audience behave in certain bizarre or irrational ways that the rest of the audience witness and respond to.

A prominent exemplar of trolling is Donald Trump. Remember him? While president, he relentlessly goaded Democratic politician Elizabeth Warren for claiming Native American ancestry, calling her “Pocahontas”. This drove Warren to take a DNA test and publish the results, which showed her to be overwhelmingly European in descent. Some claimed that you can’t test for being part of a culture; others claimed Warren unwittingly proved she may only be 1/1024th Native American. In the end, Warren apologised to a leader of the Cherokee nation. Trump probably didn’t expect his trolling to cause Warren that much unwelcome attention. That was just a bonus.

With that example, am I trolling you? One could argue that I am knowingly using a controversial figure as an exponent of a rhetorical technique Jesus employed. Right now, you might be crying: “How could Jesus be anything like Donald Trump?” There are obvious differences between Jesus and Trump, a crucial one being that Trump is only the Perfect Supreme Being in his head.

LISTENERS WERE OFTEN OUTRAGED BY THE THINGS JESUS SAID

But Jesus did this too. He used provocative comparisons and examples throughout his teachings for rhetorical effect. Look at the parables Jesus told. Often, they presented a morally complex picture to his first Century, Jewish listeners – and often to us, still, today.

In Matthew 20, Jesus tells a parable in which a vineyard owner paid those who worked longest and those who worked least the same amount. Then, in Luke 14, there’s the story of a man who threw a banquet, receiving feeble excuses from his invited guests and eventually ordering servants to drag in the poor and the destitute so that they can eat his pile of burgers a mile high. OK, I added that last bit for the Trump comparison.

In Luke 16, Jesus spoke about a dishonest manager who was fired. He then ripped off his master in order to get a better deal in his next career. Outrageously, Jesus commended his behaviour, saying: “I tell you, make friends for yourselves by means of unrighteous wealth, so that when it fails they may receive you into the eternal dwellings” (v9, ESV).

You what? You can imagine Jesus’ own disciples exploding with questions and comments. Or maybe they just nodded sagely and hoped no one would ask them to explain it to the crowds. Often his listeners were downright outraged by the things Jesus said. The more you read Jesus’ parables, the more puzzling they become. Maybe that’s why John doesn’t include any in his Gospel… 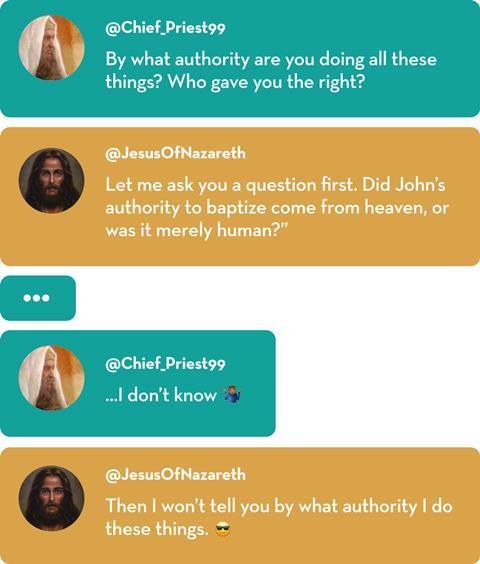 There are plenty more moments like this in the Bible. So once you’ve recovered from the knee-jerk sense of blasphemy that calling Jesus a troll might invoke, perhaps the statement is not that hard to believe. Once you are familiar with the words of Jesus, you can imagine that he would be amazing on Twitter.

Jesus would enrage everyone. And by everyone, I mean – say all four syllables clearly with me now – ev er-y-one. Atheists, agnostics, elites, religious leaders…Let’s not forget that Jesus was put to death by the religious people, who co-opted the ruling elites to do their bidding. And today, it would probably play out just as it does in the New Testament, with all kinds of people appealing to Jesus to settle their own feuds and arguments, and Jesus telling them all a parable to make both sides look dumb.

Eventually Jesus would most likely be cancelled and kicked off Twitter. Like Trump. (There I go again.) This is, of course, absurd. You can’t cancel Jesus Christ, God incarnate, through whom the whole world was made. But it wouldn’t stop everyone from having a good go.

FUNNIER THAN YOU IMAGINE

I consider this in my new book, The Gospel According to a Sitcom Writer (SPCK), in which I show how various parts of the Gospels are funnier than they first appear. One such howling moment can be found in John 11, when the chief priests and Pharisees hear that Jesus raised Lazarus from the dead and respond with an amazing plan, which is essentially as follows: this man is raising people from the dead. Let’s kill him!

They then try to do just that, arresting him and saying: “We have no king but Caesar” (John 19:15) and demonstrating their hard-hearted unbelief and treachery. Eventually, he is executed under a sign that reads: “this is Jesus, the King of the Jews” (Matthew 27:37), which Pilate has made. The chief priests want to clarify ‘the joke’ (like all people with no sense of humour) so it’s obvious that Jesus isn’t really the king of the Jews, even though we know that he is. Which is funny.

Throughout the entire Passion narrative, we see the chief priests and Pharisees do and say all kinds of foolish things that Jesus must have known would happen, given his divinity. Perhaps this is why raising Lazarus from the dead is the last miracle recorded in the book of John. Jesus knew this miracle would be the ultimate trolling event, triggering the finale: the plot to kill him, which would surprisingly succeed on the cross and then spectacularly fail three days later. 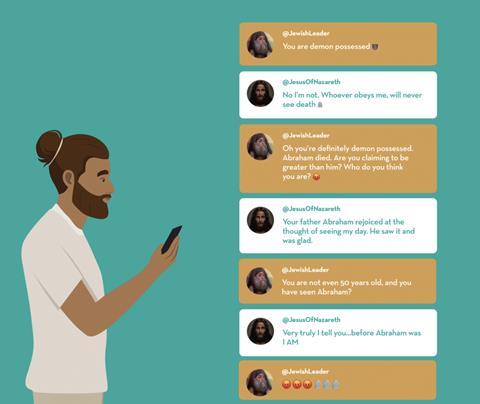 John’s Gospel gives plenty more examples of Jesus doing or saying something provocative, and the reactions that followed. This happens in John 2 when Jesus cleansed the temple. When challenged for a sign of authority, he escalated the situation, saying that he could rebuild the temple in three days if it were destroyed. The audience are baffled – and completely outraged!

But this is just the beginning. Jesus stupefied Nicodemus in chapter 3, saying that he needed to be born from above (v3). Most translations say “born again”, although literally it means “from above”, but Nicodemus misconstrues it. A prominent Pharisee, he has taken the trouble and the risk to visit, albeit at night. We are led to assume that he left the midnight liaison baffled and troubled by Jesus’ response to his questions.

Does Jesus only talk that way to the powerful and religious elites? By no means. In the next chapter, Jesus tells the Samaritan woman to go and get her husband, knowing full well that she is living with a guy she is not married to, and has been married five times before. There may have been mitigating circumstances, but it begs the question: why ruin a lovely chat about living water by asking her to fetch her non-existent husband?

When Jesus healed a man who had been an invalid for 38 years, asking the bizarre question: “Do you want to be healed?” (John 5:6, ESV), he did so on the Sabbath, knowing full well that that his enemies would go out of their minds. The Pharisees, despite their claims to be wise, learned and versed in the law of Moses, reacted like chumps. What a wonderful bit of trolling!

The pattern is repeated throughout John’s Gospel. What was Jesus expecting the reaction to be when he said: “Before Abraham was, I am” (John 8:58)? He knew rocks were on their way. And when he healed the man born blind in the following chapter, Jesus isn’t even present to witness the comic reactions of the neighbours and parents that paints a hilarious picture of misunderstanding and spiritual blindness (John 9:13-34).

But we can go too far. Jesus’ aim was not to make his enemies look like fools. John has a really touching moment tucked away in chapter 19. When Joseph of Arimathea takes away Jesus’ body, who else is there but Nicodemus, who arrives with myrrh and aloes and helps Joseph bind and bury the body of the rabbi who had bamboozled and baffled him in chapter 3. Jesus’ provocative words to Nicodemus, which had caused confusion at the time, had slowly taken effect.

Throughout the Gospels, Jesus teases and goads us with parables and proclamations. And these are designed to get a reaction from us, not to humiliate us but to humble us, making us fall to our knees. The aim is repentance, so that we crawl out of our darkness and into his glorious light. That is why John wrote his Gospel: “so that you may believe that Jesus is the Christ, the Son of God, and that by believing you may have life in his name.” (John 20:31).