God Behaving Badly: Is the God of the Old Testament angry, sexist and racist?

By ignoring hard passages of scripture, we’re missing an opportunity to understand God better, says David T Lamb. Here’s some ways to tackle the bits of the Bible where God’s behaviour seems hard to understand 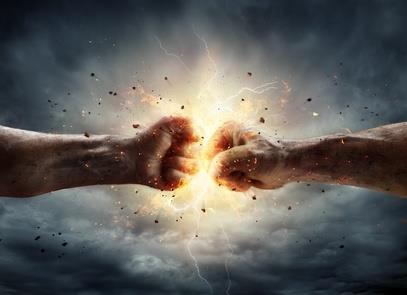 My wife Shannon and I were out one night when we ended up chatting with our waiter (as one does). He turns to me and asks: “What do you do?” I reply: “I teach the Bible, mainly the Old Testament.” He gets a little animated. “The Old Testament? Isn’t that where God is always getting angry, smiting people, and destroying cities?” I sigh, and try not to groan: “Well, not exactly, but I get that question a lot since the God of the Old Testament has a bad reputation.”

As a Bible professor, I am often confronted with various forms of the question our waiter asked:

“Why is God so angry and violent? Why does he get angry and smite innocent Uzzah who was only trying to stabilise the ark?” (2 Samuel 6)

“Is God sexist? Why does he command a woman who has been raped to marry her rapist? What’s up with that?” (Deuteronomy 22)

“Why does God command his people to slaughter all the Canaanites in the book of Joshua? Is God racist?”

It was because of these questions, and other like them, that I wrote God Behaving Badly: Is the God of the Old Testament angry, sexist and racist? Some people find the title offensive, saying: “God never behaves badly!” I reply: “You may think God never behaves badly, but a lot of people do. Perhaps even someone you know. I want to take their concerns seriously.” In order to make sense of a God who may seem to sometimes behave badly, here are five things to try.

Because these texts are so troubling, there is a tendency for Christians to ignore them in their devotions, sermons and Sunday school teaching. When Paul states: “All Scripture is inspired by God and profitable for teaching” (2 Timothy 3:16, NAS), he was talking about the Old Testament too! If we keep ignoring the places where God seems to behave badly, it’s like we don’t really believe Paul.

A pastor friend told me about a time when he was confronted with troubling, and unfamiliar, portions of Scripture when in Bible college. At first, he was embarrassed about his lack of knowledge, but then he became mad that his church never helped him make sense of them. If these disturbing parts of the Bible are not discussed in churches, people will only encounter them when reading the Bible on their own, or when speaking with a skeptic - situations which could lead to doubt or panic. As we read, study and discuss difficult passages, we not only begin to understand them, but we also profit from them, as we discover unexpected truths about God and his character. As an example, the passage we will not ignore here is 2 Kings 2:23-25, where Elisha the prophet curses a group of boys who taunt him, and God sends two she-bears to attack them.

Before we examine a passage, we need to validate anyone who asks us a question about God’s troubling behavior. Often when confronted with a problematic passage, we are tempted to downplay the tension. We are uncomfortable with a God we don’t understand, so we attempt to ‘fix’ the text with a superficial response. If we do this while speaking with a seeker friend, they may feel insulted, as if we think they are stupid for even asking such a silly question. Rest assured, the word of God will stand up to hard questions from honest seekers and skeptics.

If we keep ignoring the places where God seems to behave badly, it’s like we don’t really believe Paul

Instead of belittling people for asking hard questions about the Bible, we need to validate them and their concerns. If a friend asks you a hard question about the Bible—perhaps about Elisha, the boys and the bears—try something like this: “That’s a great question, one I have had myself. I’d love to discuss it with you.” If we affirm people asking these types of questions, they are more likely to stick around us and our churches, and encounter God through the process.

Push into the problem

After validating, we need to problematise the passage. For many people who love God, this process can be hard, but it is necessary to fully understand the depths of the issue. I often problematise in a hyperbolic manner that I may end up backing down from later. But this crucial step guarantees that we have taken the problem seriously before jumping in to ‘solve’ it. I have had conversations with atheists who, after hearing my problematised version of a passage, respond with: “Well, it’s actually not that bad.” Back to Elisha, how does this sound: “Why does God kill a bunch of innocent children just for teasing an old man?” That’s problematic.

We can now begin to look at the passage, starting with the problematic language. This will often take work, but it will be worth it. While most of us can’t read the Old Testament in Hebrew or the New Testament in Greek, there are great resources we can turn to, like study Bibles, commentaries, or friends who know more about the Bible than we do. As we realise problematic terms have a range of meanings, it helps us make sense of God’s problematic behavior. With Elisha, the Hebrew terms used for the boys here (ne‘arim, qetanim, yeladim) have a broad range of meaning, from infant to young men. As we look at the context, we realise the boys probably weren’t a pre-school group lost in the woods without supervision, but more like a teenage gang threatening an old man.

The context of a problematic passage often helps us understand why things happened the way they did. It is easy to import our own perspectives into a text in a way that doesn’t take the biblical or ancient context seriously, leading to misinterpretation. We may judge a mother who yells at her young child while paying for her shopping in front of us, but if we were to discover she’s a single parent who just lost her job, and is getting over Covid, we will hopefully have more compassion. Context matters.

From the context of the book of Kings, we discover that Elisha was a man who supernaturally fed the hungry, purified poisoned water, prayed for a barren woman to give birth to a son, raised the dead and prevented a war. By sending bears, God kept alive a prophet who became the ninth-century BC version of Mother Theresa. The fact that God rescued a faithful man who had given his life to help those in need should change our perception of God and his actions. The problem of God’s disturbing behavior may not disappear but, by examining the language and understanding the context, it will make more sense. And, through the process, we will gain profound new insights into the character of God.

David T LambDavid T. Lamb (DPhil Oxford) is the Allan A. MacRae Professor of Old Testament and dean of faculty at Missio Seminary in Philadelphia, Pennsylvania. He previously worked in campus ministry with InterVarsity Christian Fellowship and has taught extensively in various cross-cultural contexts. He is the author of God Behaving Badly: Is the God of the Old Testament Angry, Sexist, and Racist?. David lived in Oxford for six years and attended St. Aldates Church during his time in England.