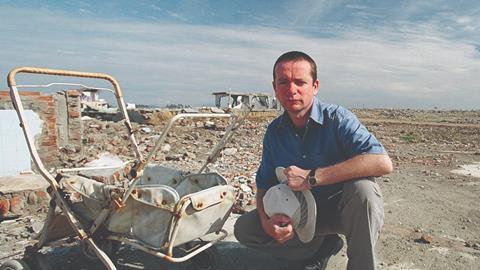 God and suffering: My quest for answers after the Boxing Day Tsunami

When almost a quarter of a million people died in the 2004 Boxing Day Tsunami, it set Dominican friar-turned journalist, Mark Dowd, on a journey to find out why God didn’t stop the suffering

As idyllic settings for a Christmas family reunion go, it couldn’t have been better. It was December 2004 and, after a glorious day’s hiking on the snow-frosted peaks of the Derwent Valley, the Dowd family tuned into the BBC Boxing Day news bulletin. Little did we know what awaited us.

Corpses being dragged out of mud. Buddhist monks turning temples into morgues on an industrial scale. Cars and houses crushed by a natural phenomenon few of us had heard of. This was the beginning of the carnage that was the Indian Ocean tsunami, which claimed almost a quarter of a million lives.

At the end of the news, my ashen-faced father uttered the words that changed my life forever. “God could have stopped that,” he said.

The following morning, I repeated these words to the head of Channel 4’s religious programming. By the end of the day, he had secured $350,000 for a two-hour documentary special in which I would endeavor to grapple with the question that has dogged us all since the book of Job: Why would a loving God create a world in which the innocent and / or virtuous suffer at the hands of natural phenomena such as earthquakes, cyclones, tornadoes and viruses? Is this the best that God can do? Why can’t we just have the good bits and be spared the bad stuff?

As an adult trying to make sense of a Christian worldview, the question of suffering had always caused me trouble. As a naive 18-year-old going off to university, I remember feeling unprepared when hostile questions were fired at me at student parties. “If your God is so loving, why do babies die of leukemia and children suffer painful deaths from bone cancer?” In the pursuit of a convincing answer, I bought and read endless books. 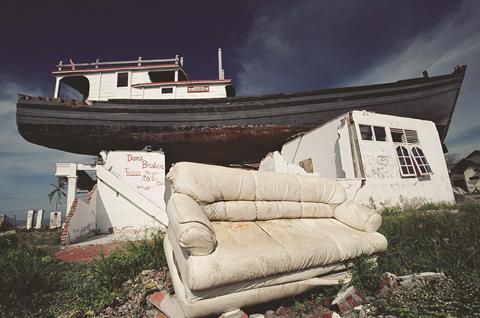 Later, when I joined the Dominican Order and, for a time, pursued a vocation to the priesthood, I was still searching. Despite being surrounded by some of the smartest individuals in the Church and regularly talking with my fellow friars late into the night, grappling with this most vexing of questions, I still felt a deep unease. Was there an answer to the question of suffering? Or did we just have to settle for the fact that it was an inscrutable mystery?

Now that I was working as a journalist, I had been presented with a unique opportunity to explore these issues for myself. During a seven-week journey across Asia, I documented the effects of the tsunami on people and places, and grappled with theological and philosophical ideas around suffering, from the ‘free will defence’ to ‘natural evil’.

GOD DID NOT CREATE A WORLD AND JUST LEAVE US. IN TAKING ON FLESH, OUR CREATOR LIVES AND MOVES ALONGSIDE US

Filming the documentary brought me face to face with people of diverse worldviews, from Muslims in Banda Aceh, Indonesia, to Hindus on the coast south of Chennai, India and Buddhists in Thailand. We met people like Fadil, in Sumatra, who had lost 19 family members on the day of his brother’s wedding. He told me that his faith and trust in Allah was now stronger; he had nowhere else left to turn. “This is my test,” he said, standing in in the mosque where the enormous tsunami wave had carried him and clutching a battered copy of the Koran.

In contrast, Poonghuzali, who lived in a hastily erected corrugated iron hut in Tamil Nadu, India, told me she hated God “because all these years I have made offerings faithfully, and God could not protect me and my family”. She had lost her husband and two children.

Along the way, all the usual explanations were offered by the many gurus, imams and clergy that I met, including the idea that God allows suffering to enhance our character, and that God is unknowable and beyond comprehension. I was also told that suffering may be divine punishment for sin (really? Babies that die of leukemia? Try that answer out for size on their grief-stricken parents).

There was also that Christian favourite, that it is all down to the Fall. This theory purports that when our ancestral parents turned against God, the laws of nature got mangled irrevocably. What it fails to consider is that death, disease and the elimination of species predates homo sapiens. Humanity’s status as complex life depends on the very processes at work in evolution that cause such occasional suffering and distress.

Despite the myriad responses, I still returned from the Indian Ocean with many question marks and very few full stops. And then, a bolt from the blue. Three months before the scheduled transmission of our documentary, there was to be a symposium on “scientific perspectives on natural evil” in none other than the Vatican Observatory at Castel Gandolfo, the Pope’s summer residence.

It would be a week-long gathering of some of the world’s leading thinkers, addressing the very heart of my enquiry. Coincidence, or divinely inspired televisual manna from heaven? Either way, I rang Fr George Coyne SJ, who was leading the Jesuit community at the Observatory at that time, and asked if I could come – with a camera crew, of course.

On the first full day of filming, we attended a session by Professor Nancey Murphy, of Fuller Theological Seminary, California. Quoting from an article in The New York Times, she explained the importance of tsunamis: “If we have a movable crust, we’re going to have earthquakes and if we have earthquakes underwater, we’re going to have tsunamis, but if we didn’t have a crust that moved, basically the whole surface would be smooth, and given the amount of water on it, it would be marshland all over. So you could have basic forms of life, but certainly not complex creatures like us.”

Just when you thought that tectonic plates were agents of the devil, we were being told that their movement regenerated the surface of the earth, ploughing up minerals and ores necessary for agriculture. Other examples of nature’s positive / negative ambiguity abounded. For example, the mosquito is indeed a transmitter of malaria and other horrid diseases, but it is also an arch pollinator and a decisive presence in nature’s food chain.

Hurricanes and cyclones – unquestionably destructive to humans – have heat and energy-transferring properties that are essential for maintaining a global equilibrium. “It’s all in scripture,” said Fr Coyne. “Unless a grain of seed dies and fall into the ground, you cannot have new life” (see John 12:24).

Among those gathered at the conference there was a broad consensus that creation and destruction are not separate entities belonging to warring forces in the universe. They are two sides of one coin. Asking God to make a material world devoid of rough edges would be tantamount to demanding that two and two equals five. Nature’s lamp casts an inevitable shadow. God cannot perform the logically impossible. 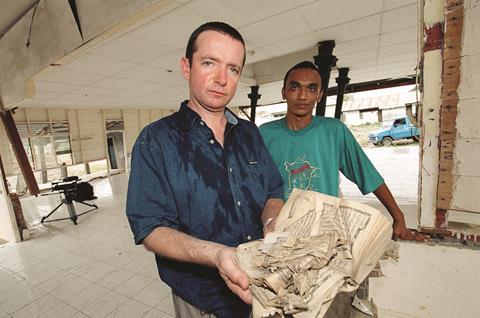 But that idea only set in motion more questions, which I would fire at the esteemed delegates in the coming days. If a loving creator cannot bring about a material world without some element of pain and suffering for complex, sentient creatures made in God’s image, then why create it at all? This is essentially the nub of the famous exchange between Ivan and Alyosha in Dostoevsky’s novel, The Brothers Karamazov (Penguin Classics).

On a huge balcony overlooking the majestic Lake Albano, I quizzed Philip Clayton, philosopher of science at the Claremont School of Theology. This was a man who had grappled for years with this very question: Why would God push the metaphorical button and bring a material universe into being?

“I would love to imagine a divine [being] who stood before that button and wept, and somehow, at the last minute, felt it was better to have us than to have only the Divine in eternal emptiness,” he tells me. “That God pushed the button and made creation hints at a mystery that we don’t understand. It hints at a resolution that we only hope for: God will only be God if the outcome is something so far better than what we see around us that it would make it alright. But I can only say that as a wish and a hope, and not as an item of knowledge.”

I ended that Channel 4 documentary by standing under a huge crucifix in Westminster Cathedral, London, offering the hope of a crucified God, who meets us in suffering and who pledged it would not be his last word. It was fine, but it smacked a little of “jam tomorrow”; the idea that we don’t need to worry about the present because the resurrection means all will come good in the end.

Seventeen years after that film first aired, I now cleave more towards incarnation as a pointer to the eternal mystery of why a benevolent creator fashioned a world that inextricably mixes rainbows and rheumatoid arthritis, immense sunsets and crippling cancers. 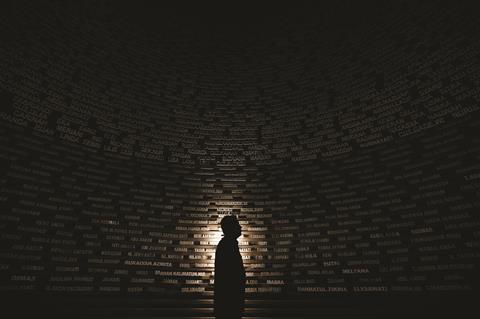 Names of the tsunami victims are displayed on a wall at the Aceh Tsunami Museum in Banda Aceh, Indonesia

Jesus is the meeting point of matter and spirit, the meaning and answer to all of history. God did not create a world and just leave us to enjoy and suffer all the circumstances existence brings. In taking on flesh, becoming Immanuel, God with us, our creator lives and moves alongside us.

This is not a remote Godhead, but one which submits itself to all that having a physical nature entails. The promise of that empty tomb on the third day invites us to hold onto the pledge of transcendent redemption: namely that nothing will ultimately separate us from the love of God made known in the death and resurrection of his Son.

When my father pointed to those shocking tsunami images on TV almost two decades ago and said “God could have stopped that”, I was lost for words. There is still no trite answer; no easy formulaic response. As the philosopher DZ Phillips wisely wrote: “It is easy for us, intellectuals, to add to the evil in the world by the ways in which we discuss it.”

But after giving extensive thought to this most perplexing of issues – and Voltaire would hate me for saying it – Leibniz probably had it right. This is, surely, the best of all possible worlds. For any God that had other feasible options that involved less suffering and pain, and still forged ahead with the universe we observe, should rightly be in the dock.

I still look through a glass darkly sometimes, but these days, it is a trifle easier to utter those words: “Lord, I believe; help thou mine unbelief” (Mark 9:24, KJV).

Mark DowdMark Dowd is a former Dominican friar turned BBC journalist. He has presented a number of award-winning television programmes on faith and religious belief. He is the author of My Tsunami Journey: The quest for God in a broken world (Resource Publications)