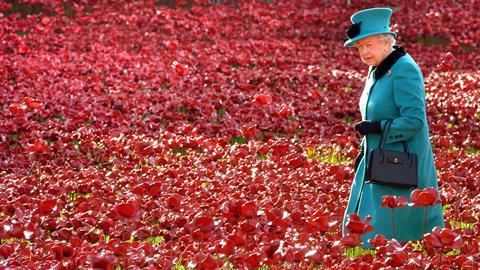 The day I took mum to meet the Queen

In reflecting on his trip to meet the Queen, Cole Moreton says he was inspired by Queen Elizabeth II's deeply held faith, and her desire to serve both her people and a higher power

I’m at the Tower of London, where I’ve brought my Mum to meet the Queen, which is a rare thing indeed. And here she is now, coming towards us: Elizabeth Alexandra Mary Windsor, whose official title is Elizabeth the Second, by the Grace of God, of the United Kingdom of Great Britain and Northern Ireland and of Her Other Realms and Territories Queen, Head of the Commonwealth, Defender of the Faith.

A huge title for a woman who is so small, at least physically, in her ninetieth year.

She loves corgis and horses and emperor stags with their mighty antlers and understands their kingdom and knows from them that one way to connect is to project, to put on a display that makes you appear bigger and more impressive than you may, perhaps, feel. So Elizabeth is in turquoise, one of those bright, structured coats that cleverly hide the frailties of age and help subjects see the Sovereign from far away.

She’s close now though, walking down the line of people in place to meet her, including me and my mum Marion, whose tight smile tells me she’s nervous. The Queen looks super-sleek, her beady, surprisingly playful eyes shining, head nodding slightly at the few fumbled words each starstruck subject manages. “Yes Ma’am,” says the lady next to me, nearly knocking out the sovereign’s eye with a hat feather as she curtsies.

Elizabeth is in turquoise, one of those bright, structured coats that cleverly hide the frailties of age and help subjects see the Sovereign from far away.

As I notice this Prince Phillip is suddenly there in front of me asking why I’m there and I mutter something about having written a piece to help raise money for the restoration of the chapel but before I can finish he is saying to my mother: “Is this your son?” Yes sir, she says, and he barks: “Couldn’t he think of somewhere better to take you?”

We think he’s being funny, or at least that it’s safer to laugh, but now he’s gone and so, we both realise, has our moment: Her Majesty is on to the next person.

Watching her work the line, I’m suddenly struck by how much she reminds me of my grandmother Gladys, who was born around the same time as Elizabeth, in the same city. They both served their country during the war: Gladys as a fire warden, climbing to the top of tall buildings during the Blitz and after, to see where the bombs were falling and the flames were rising; Elizabeth driving a truck for the army, learning how to fix the spark plugs, up to her elbows in grease. They both married brave men, Frank and Phillip, who went off to fight.

Both women were in the crowds of central London on VE Day, high with the surge of relief. And they both were full of hope as the 1950s came: young and in love and happy. But then Elizabeth lost her dad and everything changed.

This was only an accident of birth and circumstance. It could have been my grandmother or yours. She could have walked away from the throne, I suppose, like her uncle David did. She could have occupied it badly or selfishly, as others kings and queens have done. But she chose to take inspiration from her own deeply held faith that says the first shall become last. Elizabeth did feel called to this, as it was God’s will. So for it wasn’t about ego, it was about serving a higher power and her people, which she did, to the best of her ability, to the end.

At least she had Phillip by her side - well, often two steps behind in public - looking out for her, making sure she was all right. Challenging her in private - arguing, provoking, thrilling, frustrating - the man who knew those most secret parts of her that were hidden from us all. Let’s not romanticise this, their relationship seems to have been difficult at times, but he was there. He was real. She must have needed that.

She did us all a favour, of course. I’m not at all sure a monarchy is the best way to run a fair, equal and just society, but since we have one, there are reasons to be very glad it was her. A constant, calming presence, in a nation that so often needed calm; carrying the values of the wartime generation whose men and women just kept going through the darkest hours, but who have nearly all gone now.

So let me take you back to the Tower that day in the Autumn of 2014, as my Mum points out: “Say what you like, but if anyone knows what it means to have a sense of duty, it is her.”

The service feels intimate, from memory there are only 40 or so of us there. I think of the headless bodies of Anne Boleyn and Catherine Howard and Lady Jane Grey beneath our feet and wonder again at the miracle of a woman surviving for 70 years as Queen, a title that has so often been a killer. I can see her in my direct line of sight, still reminding me of my nan and as close to me now as Gladys was in the rest home, the last time I saw her, when we all sang 'Bye Bye Blackbird’. And now comes a moment that is so surreal.

Everybody stands to sing 'God Save The Queen'. “God save our gracious Queen. Long live our noble Queen.”

Elizabeth, of course, does not sing this. She sits, with her hands clasped on her lap while we run through the lines that seem to be all about her, but they’re not really. They’re about the notion of the Queen. And I don’t see the empress of a lost empire or a symbol of anything in that seat. I see an old lady, who is probably dying to put her feet up and have a cup of tea but who knows her place, who does her duty and has done for so long it must have become habitual and is nodding along to the rhythms of the anthem, in that happy way a muppet nods. Until she glances up at her husband and makes eye contact, and maybe he winks, I don’t see, but she smiles and has to put her head down to avoid a big old laugh during the national anthem.

The smile lingers. Honestly, the pair of them. Entirely public, entirely on duty, still themselves. And outside, afterwards, I loosen my tie and Mum kicks off her shoes for a while and we walk along the walls to look at the wave of ceramic poppies spilling out of the tower and over the stones and across the grass to the moat. Blood Swept Lands And Seas Of Red, this piece of art is called and it is powerful. Each of the 888,246 poppies represents a man or a woman, a boy or a girl who died for King and Country in the First World War. And I think of the parents of all these people, the sisters and brothers, friends and lovers, and how it is that love endures.

I think of Elizabeth and her husband and their shared moment and realise that to survive in the midst of all this symbolism, all these big ideas and ideals that bind and inspire but also crush, you’ve got to find something tangible, someone or something real that you can trust and hold on to through it all. And I say: “Hey mother, come here.” And out there in the open, by the flowers of the fallen, I hug my Mum, and she holds me, tight.

This is an adapted extract from an episode of Cole Moreton’s true story podcast about encounters with remarkable people Can We Talk? Listen to the full version on all platforms now. The stories will be published in book form by Hodder Faith next year.

Cole MoretonCole Moreton is a writer and broadcaster who interviews people for The Mail on Sunday, makes documentaries for Radio 4 and writes books. His debut novel The Light Keeper is out now