Squid Game: What is it? Why is it a hit? Should Christians watch it?

Squid Game is the most popular show on Netflix. But the programme has caused upset among many. Most recently, Bedfordshire Council advised parents not to let their children watch the series, after reports children as young as six were copying its violent challenges. How should Christians respond to the programme? Our reviewer Nathanael Smith shares his perspective 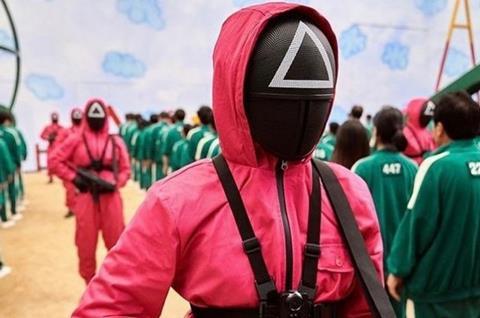 When Squid Game was first released, it wasn’t hugely popular in its home territory of South Korea. Then, somehow, this violent, upsetting show became a worldwide sensation. It is now undeniably the most talked about release out there and Netflix’s most successful series ever – topping even last year’s Bridgerton.

You can barely go online without seeing memes, think-pieces and concerning news items inspired by this megahit. All of which must lead to questions for Christians wanting to stay connected to the culture: what’s it all about; is there value in it; should I watch this?

Squid Game is a high-concept thriller in which deeply indebted individuals, desperate for money, are recruited to participate in deadly versions of childhood games in which “elimination” means just that and the prize is a life of riches. The participants all wear numbered green tracksuits and live in a communal room while being overseen by mostly silent henchmen with Playstation symbols on their masks. In episode one alone, around 200 players are killed.

It’s an exciting show, powered by the theme of economic injustice that similarly made The Hunger Games a hit.

The show quickly establishes its band of protagonists, led by the irrepressible Gi-Hun. Unlike Battle Royale, the famously bloody Japanese film to which many have compared the show, Squid Game takes time to get to know the characters. We glimpse into Gi-Hun’s life as he struggles to connect with his daughter, gambles away what little money he has and struggles to care for his ailing mother. Other characters include a young woman who fled from North Korea and an immigrant from Pakistan hoping for a better life. We then have to watch in fear as they face increasingly high-stakes games and sharp, short bursts of violence.

Why it’s a hit

It’s not hard to see why something so dark has become so popular. The battle royale genre is all the rage in video games at the moment – the ludicrously successful Fortnite operates on almost the same kind of elimination framework, albeit with a cartoony flavour.

There’s a ghoulish thrill to seeing who is going to make it as the numbers tick slowly down to one. Squid Game taps into this zeitgeist-y concept to great effect.

There’s more to it than just the gladiatorial excitement of violence, however. The aesthetics of the show, consisting of garish colours and Escher-like staircases, are instantly iconic – prepare for many Squid Game Halloween costumes come 31 October. It’s an exciting and devastatingly emotional show, powered by the theme of economic injustice that similarly made The Hunger Games a hit.

How should Christians approach it?

It goes without saying that children should not be watching this show. The challenge comes with the fact that Netflix doesn’t have the same barriers as entry to a cinema, so many children will receive second-hand exposure through friendships or through people watching on their phones at school. With a release this buzzy, it will be harder to avoid than it will be to find.

A more thoughtful approach is required for adults. While it is undeniably violent, the brutality is intended to shock; this not something like the Saw films that relish in guts and gore. Squid Game is making a clear point through the relentless death, about how the poor and oppressed are treated as worthless. It’s not exactly subtle, but it is effective.

Christianity is present in the series, as you might expect in a series set in South Korea, where almost 30 per cent of the population are believers.

In fact, Squid Game’s greatest strength is in how it makes you care for people who are often abandoned at the fringes of society. One disaffected young woman reveals that her father was a pastor who sexually abused her; another is just desperately trying to reunite her family. It’s no spoiler to say that it’s rich people who are to blame for the injustices done to these people, exploiting their desperation for the sake of entertainment – a bleak reflection, perhaps, on our enjoyment of the show as viewers. Yet this empathy for the marginalised lends tremendous emotional weight to the consequences of the games, making a game of marbles one of the most upsetting things you’ll see this year.

Christianity is present in the series, as you might expect in a series set in South Korea, where almost 30 per cent of the population are believers. Participants in the deadly games question where God might be in all of this, or they beg in prayer for forgiveness. Squid Game is ultimately invested in its human characters, which does give it some worth even to Christian viewers. That, however, is not a wholehearted endorsement.

The answer to any question of “should Christians watch x” is always a complicated one. Beyond obvious biblical prohibitions such as pornography, there is nothing prescriptive in scripture about what disciples of Jesus should or should not watch. That way lies legalism and some occasionally strange instructions – I remember hearing a sermon saying that the James Cameron movie Avatar was demonic. The reality is that our viewing habits should be shaped by our consciences, whilst remembering that “not everything is beneficial” (1 Corinthians 10:23).

In a media landscape saturated with sex, violence, materialism and distractions, our consciences do need the occasional fine-tuning. While there isn’t a one-rule-fits-all approach to what to avoid, we at least need to wrestle with what we consume and how it affects us; especially when it’s something that would otherwise appeal to us or exploit one of our weaknesses.

As a huge fan of fantasy, I watched a whole season of Game of Thrones before I felt prompted by God to stop due to its sexual content. Am I saying Christians shouldn’t watch it? For me the answer was no, but that isn’t true for everyone. The most important response is to ask the question in the first place and to be obedient to God’s answer, even if it’s an exciting, popular series.

It’s not the darkest or most violent show out there, but repeated exposure to such content can risk creating a coarsening effect

The way Christians should respond to Squid Game is with caution. It’s not the darkest or most violent show out there, but repeated exposure to such content can risk creating a coarsening effect. The show is exciting, but no TV show or film is truly necessary; you won’t miss out by not watching it.

If you like Korean art, high-concept storytelling or themes of social justice, try the much more engaging films of Bong Joon-Ho. If, like me, you choose to watch it, be aware of its possible effects on you and take care when recommending it to others, lest you “put a stumbling block in the way of a brother.” (Romans 14:13)