Don’t be put off by the low budget. This film about radical Bible translator John Wycliffe deserves to be watched

A new biopic of John Wycliffe promises to bring the viewer “face to face with a man of true genius”. As Morningstar embarks on a premiere screening tour across the UK, Eddie Arthur says we all owe a lot to this radical translator 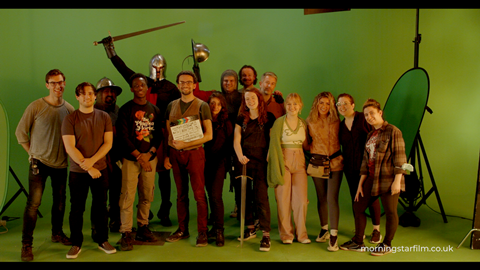 Where does a Bible translator come from?

For me, the journey from the North East of England to West Africa was a long one, an unusual one, but not a particularly radical one.

I don’t suppose any of my school friends would have put me down as a possible translator, but I grew up in a Christian family and had a call to mission backed up by a strong academic background; it made perfect sense for me to explore a life in Bible translation.

Things weren’t quite so straight forward for John Wycliffe, whose story is told in Murdo McCleod’s new film Morningstar.

&quot;Morningstar&quot;: the trailer from Trinity Digital Film on Vimeo.

Wycliffe was born in the 1320s in Yorkshire but he went to University in Oxford in his mid-teens, where he proved himself to be a brilliant and charismatic scholar.

With a mixture of documentary and dramatic reconstruction, the film takes us through the ups and downs of Wycliffe’s life. We see a man who was shaped by the horrors of the great plague and who questioned the corruption that he saw in the Church, which was much more interested in taking from people than caring for their spiritual needs.

Working from philosophical principles, Wycliffe started to consider the concept of power and concluded that power – in the church and in the state – is carried out under God’s stewardship and must follow God’s pattern. There was no reason for the church to have vast wealth or demand money from poor peasants. His driving thoughts were always spiritual, but he found himself in the middle of a political battle between the church and powerful Lords who were at loggerheads over money, influence and power.

In the end, his uncompromising stance offended everyone, and he was left without friends in court or in the church hierarchy.

Wycliffe pushed his ideas further and realised that we are saved by God’s kindness and that this should drive the way we live, rather than our salvation hanging on obedience to rules established by the Church.

Determined to get this message out to the widest possible population, he trained preachers who spread out across the country speaking to people in English. He also realised that if people were to really get to grips with what God was saying to them, then they needed to be able to read the Bible in their own language, rather than in Church Latin. He gathered a team around him and together they completed the first translation of the Bible into English.

Morningstar presents us with a complex, rounded character; he is a philosopher, a priest, a diplomat and an inept political wrangler. Wycliffe was motivated by anger, by frustration and above all by a sense of the greatness of God and his mercy.

If you are hoping for high-end production and amazing graphics, you are likely to be disappointed

Translating the Bible into English in mediaeval Europe was a radical, not to say dangerous, act. Morningstar shows us how and why a promising university teacher would end up taking such an unexpected road. It is a fascinating story – a story that is not just of academic interest. If you’ve ever read the Bible in English or if you value the fact that the government does not force you to follow a particular form of religion, then you owe a lot to Wycliffe and his followers.

This is not a big budget, Hollywood production. If you are hoping for high-end production and amazing graphics, you are likely to be disappointed. For example, some of the backgrounds for the dramatic reconstructions are not particularly convincing. They generally do better when they don’t actually try to be realistic. However, this is to miss the point; this film is all about the story telling and it is a good story, well told. 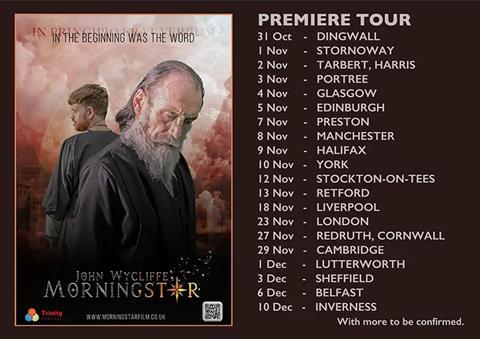 Philip Todd makes an engaging guide as he walks through Oxford, London and other scenes of Wycliffe’s life. The various academic experts present their case well, without ever being too dry and dusty, while the various dramatic reconstructions break up the flow enough to keep you engaged.

Should you see this film? Yes, you should. It’s not a high action, Marvel blockbuster; it’s much more important than that. It’s not just the extraordinary life story of a remarkable man – though it is that. Nor is it just a retelling of events which led to the development of the modern world. This is a small part of God’s bigger story which runs from creation to the end of time; as the final scene reminds us, the idea of a merciful God who saves us even though we don’t deserve it and who speaks to us in our own language has spread around the whole world. What once was radical is now universal.

Morningstar is currently touring the UK. See morningstarfilm.co.uk for dates or to purchase the DVD

Eddie ArthurEddie Arthur is the former executive director of Wycliffe Bible Translators, an organisation he has worked for over 35 years. He blogs at kouya.net