Jeff Lucas on the day his house nearly burned down 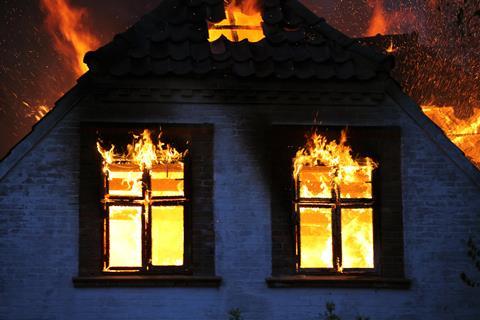 A couple of weeks ago, two nice chaps stopped by our home and promptly set fire to it. Which was rude.

They hadn’t planned to commit arson – their agenda was to cut the grass. All was going well as they swept around on their ride-on lawnmowers, until one of the machines began to overheat. Instead of pausing the job, the rider carried on – which was a bad decision because the mower caught fire. He jumped off to safety but the flames soon ignited the long grass, setting our tall pine trees ablaze and then spreading to the house. As one elevation burned, windows exploded from the intense heat. Inside, I was preparing a sermon about rejoicing when trials come our way. Suddenly aware that a hot trial was heading our way at warp speed, we dashed outside and called the emergency services.

Four hours later, the fire brigade arrived. Actually, they took just eight minutes, it just felt like so much longer. Watching as the roaring inferno spread, I whispered to Kay: “I think our house is gone.” Our poor mower-rider just stood there, watching the carnage, tearfully muttering: “I’m so sorry,” over and over again. We tried to reassure him; it was an accident, everyone was safe, all would be well.

And all will indeed be well, not least because the house is not gone. Three hours later, with five fire trucks, a large team of firefighters, a police presence and even a visit from the police chaplain, the fire was out. It will take months to rebuild, but we’re grateful that nobody was hurt. Insurance helps too.

I whispered to Kay: “I think our house is gone.”

The next day, I preached my sermon about finding joy when life is tough, only now I had a super relevant illustration for my talk. Just a few days later I had to deliver a study on the book of James, about how our uncontrolled words can create as much damage as a spark that causes a whole forest to go up in flames. Cue relevant illustration once again.

Two minutes before the fire began, I was happily tapping away on my keyboard. Flitting between commentaries and biblical text, I was checking the meaning of Greek words and enjoying the process of shaping my teaching about responding to the trials of life. Practising what I was about to preach took a lot more effort but, when we turn to scripture, we come not to head-in-the-sky idealistic notions, but to God-breathed wisdom for every season of life. 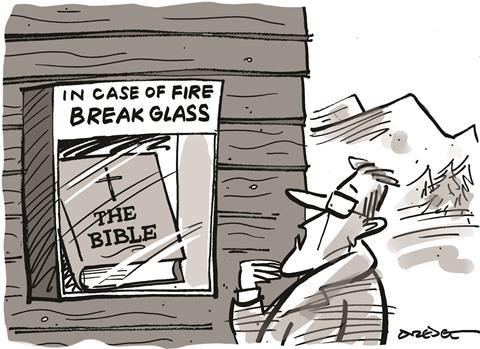 Some have asked how faith interfaces with a wintry, Covid devastated world where there seems to be sparse evidence of any great interventions from God. But, in scripture, we discover words penned by people who were in lockdown, written for people who were in lockdown. Consider Israel held captive as slaves in Egypt, or Joseph, falsely accused by Potiphar’s wife and unjustly parked on death row. Then there’s Daniel and his pals trapped in Babylon, the biggest, baddest city in the world at that time, Paul and Silas belting out hymns at midnight in a dank prison cell, or the apostle John banished to the island of Patmos. The pages of the Bible provide us with practical stories and vital tools for life at its best and worst.

Faith can become a vague habit, a set of sacred propositions that we affirm on Sundays but forget when Monday morning challenges stop by. Today, with the empowering of the Holy Spirit, let’s endeavour to live what we say we believe, lest living faith descends into mere theory.

And if you’re got a spare ride-on lawnmower, I know a chap who needs one.