Despite having pre-pandemic congregations of less than 90, two churches in Wales recently held a bumper confirmation service that saw 59 people welcomed into their church family in one day 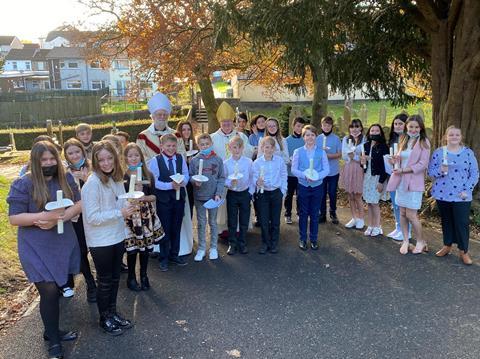 Due to the sheer numbers attending, they had to hold two separate services. Parish priest, Fr Richard Green, enlisted the help of former Archbishop of Canterbury, Rt Rev Rowan Williams, and Rt Rev June Osborne, Bishop of Llandaff, to oversee the busy event at which a father and son and mother and daughter were confirmed together.

He shares his thoughts about the day…

We had originally planned to have a confirmation at our church in the summer of 2020; we usually hold one around July. And so we got all the people that wanted to be confirmed together in February, encouraged them to come to church during Lent and then planned to start confirmation classes after Easter.

The bishop lays a hand on them and says: “Confirm, oh, Lord, your servant with your Holy Spirit.” It’s quite a short act, but very meaningful

In March 2020, I had all these people wanting to be confirmed but, obviously, the lockdown intervened. I thought: Well, we’d better move with the times, so we did online confirmation classes. We used Google Classroom; I set them work, and they submitted it. And we had a few Zoom sessions. It was difficult, with 50-odd people, but we did it.

The confirmation classes came to an end about a year ago. So it’s taken us another whole year to get to the position where we could actually hold the service itself. It was just lovely to finally get there. Everyone has been so patient and persevered through so much, and it was a real joy that they were all still so keen to get confirmed. A few people couldn’t make the date or changed their mind, but the vast majority stuck with it.

A different kind of preparation

Preparing online wasn’t ideal. The biggest difference was not being able to build the rapport with the children that we normally do. Over ten weeks of classes, you get to know them really well. Just interacting with them online was a bit weird, but we made the best of the situation. The kids were all used to using Google classroom with school, it was me who had the greatest learning curve. With the adults, because we were using Zoom, it’s a bit more like being in the room with people. We were able to interact, so that was better. In 2020, everybody just had to adapt and try to carry on with things in different ways, rather than just say: ”Right, we’re not going to bother.”

There was such an atmosphere of joy and happiness and celebration

Having Rowan Williams present at the service was lovely. Bishop June said: ”Because you’ve got so many people, we need to have two bishops really. Otherwise the service will go on forever.’” Rowan retired to Cardiff last year, so he’s been helping out a lot across the diocese. It was lovely to have him. On one level, he’s obviously an amazing intellect, but on another level, he’s just really human, self-effacing and humble. And he’s able to really engage with people where they are. Lots of people said afterwards that they enjoyed his sermon.

Because of the capacity of the church, and to make things Covid safe, we had to have two services. Originally, we were going to be confirming 66 people altogether. In the end, it was 59. And each one of those people may bring two guests each. Suddenly that’s 200 people, which is more than we’ve got seats in the church! So, we decided to have two services. It’s nice to have the whole group together, obviously, but again, that’s the theme of the last 18 months: making the best of the situation we find ourselves in. It was just really, really lovely - and the weather was nice as well, so we were able to gather outside.

Each person comes up individually to be confirmed. The bishop says: "God has called you by name and made you his own.” And then they’re anointed with holy oil, the bishop lays a hand on them and says: "Confirm, oh, Lord, your servant with your Holy Spirit.” It’s quite a short act but very meaningful.

My favourite memory of the day is the look on everybody’s faces; the smiles. Everyone was happy. People were beaming. I think it was probably a mixture of relief and excitement; all the pent-up feelings of the last 18 months. There was such an atmosphere of joy and happiness and celebration.