Children in Syria are freezing. Here’s what Christians can do to help

Nine years after Samara Levy first started collecting aid for Syrian refugees, she returned to the country in the depths of winter. What she found there shocked her 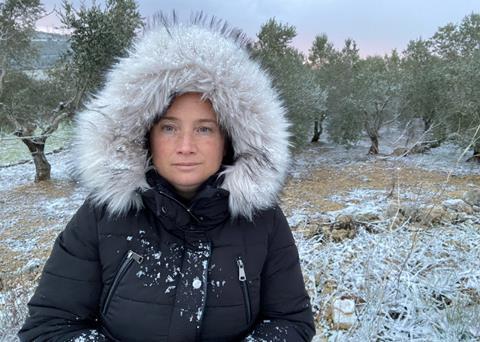 The biting wind tore across the frozen Syrian desert, blowing away the remnants of last night’s snow. As I zipped up my coat to keep out the bitter wind, I saw a small boy wearing only a tracksuit and plastic summer clogs with no socks. His shoulders were hunched against the icy wind. My heart sank as I realised the children’s coats we had brought with us were too small for him.

The tragedy is not only what these widows and orphans have suffered, but what they continue to endure

Many families in these villages live in abject poverty, scattered across the desert. For the poorest, the orphans and the widows, life in these communities is far tougher than most of us could ever imagine. Most aid agencies don’t come out this far - they are already overwhelmed by the ocean of need on their doorsteps in the cities. These people have nowhere to go and no one to help them.

It is nine years since I first heard a call from God to “start collecting” winter aid for Syrian children. I had seen reports of people living in camps in the snow with nothing more than flip flops to wear on their feet. My first prayer of desperation, for God to multiply the few boxes and bags of aid that I had collected, was answered over the following weeks as our container was miraculously filled. Since that humble start in 2013, we have distributed aid to more than half a million people, supplying four field hospitals at different times. We have opened a center for orphans and widows, and are about to open a second one, in addition to our medical center. We are now farming food in Syria, and the vision continues to grow.

This, however, was the first time I had visited Syria in the depths of winter to see conditions for myself. We drove through the wintry city, the piercing wind whipping through the streets. An elderly man sat beside the road wearing one shoe and one sandal. Adults and children bustled along wearing plastic beach slippers or summer clogs - some with socks, many without.

As we approached our center, which provides education, training, hot food and basic essentials for orphans and widows, I watched the steady stream of children in the street. A teenage boy hobbled along on the balls of his feet, the clogs he was wearing many sizes too small. A child in flip flops mounted the remains of a bicycle with stubs for pedals, clattering down the road. Many children arriving at the center had no coats. Their clothes were filthy; dirt was ingrained in the cracks on their feet caused by exposure to the freezing cold air.

Living in the rubble

We visited some of them in their homes - if you could call them that - bomb-damaged carcasses in derelict neighbourhoods. It is hard to believe anyone could live in those streets, which bore more resemblance to a scene from a post-apocalyptic film than a neighbourhood inhabited by actual people, yet the children played among the rubble while families, widows and orphans took shelter in the least damaged of the concrete shells. Many had no glass in the windows, others had large holes in the walls, leaving little to separate living quarters from the street, or protect people from the elements.

When we serve our brothers and sisters, we are doing exactly what Jesus called us to do

With no electricity or heating, we sat in the semi-dark of one ruined building, our frozen breath forming in the air as we talked with the widowed mother of two children. No one removed their coats. With a thin, grey blanket spread across the bare concrete floor, there was little comfort in this home. Although an improvement from the abandoned factory they had been living in before, it was still colder inside than out, yet her daughter wore only beach sandals with socks in the middle of winter. Her feet must have been freezing. Her dark hair was only just beginning to grow back, having fallen out due to the stress of living in this warzone. Life had been gruelling since her father was killed.

A million stories of suffering

I wish their story was unique, yet we hear many similar tales from the orphans and widows who come to us. How does a pre-school boy survive witnessing his parents and siblings savagely murdered by jihadists? Or a wife recover from opening her front door to see her husband’s brutalised, dead body slumped on the floor as her children look on? Could I get over my husband disappearing, then being telephoned to come and collect his dead body, so disfigured by the torture he had endured that I could barely recognise him?

The tragedy is not only what these widows and orphans have suffered, but what they continue to endure now. There is no dignity in poverty, especially in winter. That’s why we are appealing for churches, schools and individuals to help us. Our dignity bags, which we are distributing to the orphans and vulnerable children we support, aim to alleviate some of their suffering. It’s not much: a coat, a pair of shoes, socks and some basic hygiene items - just the essentials that nearly all of us take for granted. We would love to be able to give a dignity bag to all of the 350 children that our outreach centres support. But if we have more, there are huge numbers of children in the surrounding area also in great need.

These items are not luxuries, they are necessities. I know, without any shadow of a doubt, that when we serve our brothers and sisters in this way, we are doing exactly what Jesus called us to do when he said: “For I was hungry and you gave me something to eat, I was thirsty and you gave me something to drink, I was a stranger and you invited me in, I needed clothes and you clothed me… whatever you did for one of the least of these brothers and sisters of mine, you did for me.” (Matthew 25:35-40).

To find out how to help visit www.samarasaidappeal.org/dignity-bags

Samara LevySamara Levy set up Samara's Aid Appeal in 2014, after seeing images of Syrian refugees on the news. Read about her story in Rebuilding the Ruins, and the story of a Syrian doctor who stayed to serve his people through one of the worst humanitarian crises of our generation in Up From the Ashes. Available from www.samarasaidappeal.org/books