Why Christians should support moving the British embassy to Jerusalem

The leaders of the largest churches in the UK have all opposed moving the British embassy from Tel Aviv to Jerusalem. But Dr James Patrick says their views are not representative of many in the pews 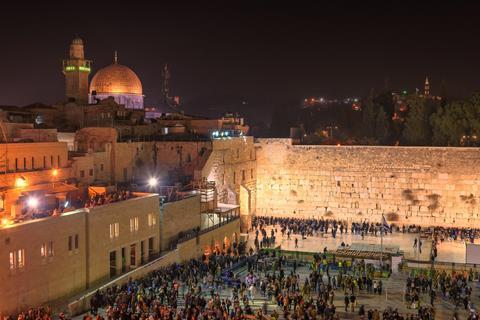 In view of recent statements by the Archbishops of Canterbury and Westminster, alongside leaders of other mainline denominations (Methodist, United Reformed Church etc), one might get the impression that Christians are united against recognising Jerusalem as the Jewish capital, and therefore moving the British embassy there. On the contrary, there are large numbers of rank-and-file Christians who believe that unchanging biblical promises are the only realistic pathway to political peace.

The fundamental promise is summed up in the term Zionism, and Christian Zionism was a mainstream conviction across British society, centuries before Jewish Zionism became politically active. Like outgoing Prime Minister Liz Truss and many others in her party, we are wholehearted Zionists, meaning that we prayerfully and practically support the longing of the Jewish people worldwide and throughout the ages to return home to Jerusalem, the more common name for “Zion”. Jesus himself spoke of his age-old longing to gather the children of Zion back to Jerusalem, which he expects to be completed when he will return (Matthew 23:37-39; echoing his mission in Isaiah 49).

Zionism has been affirmed as “an important and legitimate aspect of Jewish identity” in the context of Christian–Jewish relations, by the 2019 Anglican theological document God’s Unfailing Word.

We are not interfering in politics when we affirm on historical and religious grounds that Jerusalem is the legitimate capital of the Jewish people, and naturally also of the only Jewish state in the world.

With the Archbishop of Canterbury, we “pray for the peace of Jerusalem” (Psalm 122:6), recognising that the same psalm speaks of the divine instruction, ever since the psalm was written by King David 3000 years ago, for all the tribes of Israel to enter Jerusalem as their centre for both worship and political government (122:1-5). As the psalm goes on to say, “For the sake of my brothers and my friends [both Jew and Arab], I will now say, ‘May peace be within you’” (122:8). Jerusalem, “city of peace”, is destined to attract all nations to its Source of truth and justice and therefore international peace, but only when the God of Israel has regathered his outcast Jewish people to Mount Zion (Micah 4:1-8).

It is therefore for the sake of both regional and world peace that we celebrate the return of the Jewish people to Jerusalem for worship and for government. In fact, Jesus himself prophesied first the expulsion of his Jewish people from Jerusalem by the Romans in 70 AD, followed by lengthy non-Jewish rule over the city, and then an end to non-Jewish control (Luke 21:24), evidently fulfilled at least in part in 1967 after nearly 19 centuries of exile. The return of the Jewish people to Jerusalem is an important sign that the King of the Jews, the Prince of Peace, will himself soon return to extend his government and peace from there throughout the earth (Isaiah 9:6-7; Luke 1:31-33).

The interventions by Cardinal Vincent Nichols and by Archbishop Justin Welby both insist on a final political settlement negotiated between Israel and the Palestinians before any move of the British embassy from Tel Aviv to Jerusalem, currently under review. But they fail to acknowledge the religious core of this dispute. The central intractable conflict is about who controls the Old City (within so-called East Jerusalem), and more precisely about who is to be worshipped on its Temple Mount. It is naïve to think that such a religious crux can be resolved by political means. According to the scriptures shared by Jews and Christians, we recognise that only God’s final return to the city will change it from a “heavy stone for all the peoples” into the spring of living waters for all nations (Zechariah 12:3; 14:8, 16-17).

In the meantime, therefore, we should at least seek for provisional peace and fair treatment of both parties, aware that biblical promises also apply to Palestinians within the land (Jeremiah 12:14-17). If Britain supports a two-state solution with the capitals of Israel and a Palestinian state being West and East Jerusalem respectively, then it is manifestly unfair for the British embassy for Israel to remain in Tel Aviv when the Palestinian consulate is not in Ramallah but in East Jerusalem.

Disproving the Cardinal’s warning that moving the embassy to Jerusalem would be “seriously damaging to any possibility of lasting peace in the region and to the international reputation of the United Kingdom”, we recall how the move of the American embassy in May 2018 was followed in September 2020 by the Abraham Accords, historic peace agreements in the region. The USA affirmed that the recognition of Jerusalem as the legitimate capital of Israel should not be seen as a prejudicial statement about the status of the Old City. But that is just what the established churches themselves seem to be presenting on the opposite side. We should acknowledge the true implications of the call by at least some “leaders of churches in the Holy Land”, mentioned by both the Cardinal and Archbishop, for Israel to implement certain UN resolutions (SC 242, 2334) by withdrawing to the mis-named “1967 borders” (in fact, 1949 armistice lines). This would expel all Jews from the Old City once again, implying a return to Muslim rule over the Old City, under which from 1948 to 1967 the Jewish people were denied any access to their holiest places. Even if the Vatican’s idea of UN control or else “international guarantees” are preferred to Muslim rule (UNGA 181, 194), permanent anti-Israel bias at the UN does not fill Israel with confidence that this would be any better.

It must be recognised that under Israeli rule since 1967, and enshrined in their Basic Law, all religions are guaranteed freedom of access and worship in their holy places in Jerusalem, and we commend this optimal status quo over any proposed alternatives. Christian leaders should be indebted to Israel for the full religious liberty granted to us under their authority, not to mention our biblical debt to minister in material things to the Jewish people whose spiritual riches we owe our lives to (Romans 15:27).

If moving our embassy to Jerusalem will strengthen British relations with the Jewish nation, a key ally in the region and also our spiritual older brother, then from a Christian perspective this is a perfectly “valid reason” to consider the move. We bless the current British government as they conduct this review, and will continue to pray until God makes the “city of the great king”, Jerusalem, “the joy of the whole earth” (Matthew 5:35; Psalm 48:2; Isaiah 62:7).

The article was written on behalf of Love Never Fails, a coalition of British Pro-Israel organisations (lnf.org.uk)

Dr James PatrickDr James Patrick is a speaker, writer and academic, having completed degrees at both Cambridge and Oxford in theology and religious studies. He grew up in Papua New Guinea, and has chosen to remain celibate for the sake of the coming Kingdom.