What Ukrainians need this Easter is not more happiness, but resurrection hope

Happiness might be in short supply in Ukraine at the moment, but Rev George Pitcher believes it’s hope that will make all difference 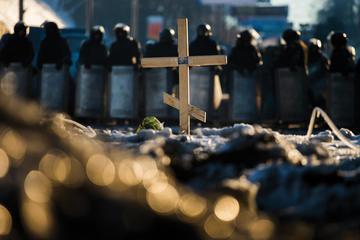 Happiness is in short supply at the moment. Emerging from two years of the Covid plague, we’re now presented with bloodshed in Ukraine. Two of the Four Horsemen of the Apocalypse to go: Famine and Death. Though there are plenty in the world who have collected the set of four already, in western Europe we could be well on the way to ticking off the final two, as pestilence and war send our economy to hell in a handcart.

Yes, I know. It’s being so cheerful that keeps me going.

I was talking about living a happy life with my spiritual director the other day. She referenced “living with intent” and the importance, as we grow older, of stripping back on the active clutter of our lives to what is essential for our – and other people’s – happiness.

Later, she sent me a link to a podcast from Word On Fire, a catholic evangelism site founded by Bishop Robert Barron, a former NBC religious correspondent. It forms part of a course called The Art of Happiness, taught by Arthur Brooks, who is professor of Public Leadership at Harvard and a social scientist.

In it, Brooks offers “three equations for happier catholics”.

The first is: Your subjective well-being = your genes + your circumstances + your habits.

Since the final part of this sum is, arguably, the only part under our control, the second equation unpacks it: Habits = family + friends + work + faith (the last defined as “engaging with the transcendental”).

The final equation is: Satisfaction = What you have ÷ by what you want. That last equation is at the heart of what my spiritual director meant, I guess, by stripping back on the non-essentials.

So far, so social-scientist. My problem here is not the American wellbeing style of delivery – that’s my problem, not theirs – it’s that these equations are essentially rubrics for the Already Happy.

Try them, for example, on the people of Ukraine and they fall apart. Your habits aren’t under your control when they include sheltering your family in a cellar from a missile attack. Similarly, their genes only count in so far as “being Ukrainian” can be considered genetic. And it’s a bit hard to aspire to satisfaction, when what you have is packed in a suitcase and what you want is to stay alive.

But this isn’t a charter for hopelessness either. Brooks is actually at his strongest when he abandons his social science in favour of his theology. He argues that “the well-spring isn’t us or the world” and that “a catholic’s job is actively to participate in our sanctity.” (I’d argue that this is the job of all people of faith.)

What Brooks does here is point away from his equations, which may be just a teensy bit trite, to a God who doesn’t make a market in happiness. By that, I mean that the love of God isn’t a zero-sum equation. There isn’t that misery over there that we can exchange for some of our happiness (a spare room in our home or a debit card payment). There is only the sanctity of an unconditional love which, released into the world, transforms it.

It’s that divine intervention through humanity into the world that defies mathematics because it’s not zero-sum. It’s a newly generated resource every time, which defies the laws of physics, because it’s an entirely miraculous form of energy.

That’s why what we celebrate at Easter in three weeks’ time isn’t a finely balanced equation, in which we add human fallibility to sin, which equals God’s new covenant. No, it’s something entirely new – that’s why the first disciples didn’t recognise it. Something given freely, without exchange (whatever the fans of penal substitution might try to tell us).

So, ultimately it’s about hope, not happiness, and that’s what sanctity and sanctuary provide. Happiness offers a better version of life; hope offers new life. Ukraine doesn’t need an equation. It needs a resurrection.