The guilty verdict in the George Floyd case is the beginning, not the end of the fight for racial justice

Last night’s verdict was a pivotal moment in a historical struggle. But there is still much work to be done says Bishop Dr Joe Aldred

Like much of the world, I heaved a deep sigh of relief when Judge Peter Cahill read out the three guilty verdicts in the case against ex-police officer Derek Chauvin over the death of George Floyd. Once it was announced that a verdict was imminent, it was as though the world held its breath, unsure if the murder we watched on video could be, as Chauvin’s defence lawyer argued, not what we thought it was.

This guilty verdict was important; making all accountable under one law is even more important

It felt like a pivotal moment in the historic struggle between US police and African American citizens. A not guilty verdict would see us pushed back into the valley of despair. A guilty verdict offered hope and encouragement that maybe, just maybe, there could be accountability when a police officer kills an African American. In the end, a rubicon was crossed. For the first time in US history, a white police officer was convicted of murdering a black person.The Aldred family WhatsApp group was in overdrive by the time Judge Cahill delivered the verdict. We exhaled relief.

I admit to praying for a guilty verdict. Not out of ill will towards the defendant, but out of a sense of righteous indignation at the possibility that a police officer - whose job it is to preserve order and protect life - might be found not guilty of a murder the world watched him commit.

Christian faith calls for justice, not as an event, but as a process

The God that Christians believe in is a God of justice and it is worth remembering that Christian faith has been evident throughout this year-long debacle. As Heather Tomlinson previously wrote for Premier Christianity: “George Floyd’s personal story is one of faith, of trying to escape the lifestyle of drugs and crime that surrounded him, and working to improve his community.”

He is said to have met his partner, Courtney Ross, at a Salvation Army shelter where he worked as a security guard. She described him as: “a deeply spiritual man who prayed regularly, who was concerned about those around him.” None of this makes George Floyd an angel, just a fallible human being who believed in God. It was a point made several times by Rev Al Sharpton at public meetings with the Floyd family and in his homilies. The way in which the Christian faith drives justice through prayer and action was exemplified by Sharpton in his sermon at Floyd’s funeral. He pointed out how “wickedness in high places” and not holding those who commit such wickedness to account allowed “bad cops” to dehumanise black citizens.

The beginnings of justice

As I reflect upon this verdict, I am hesitant to say that justice has been done. I am reminded of what pastor Ade Omooba, chair of the National Churches Forum, said recently: “accountability is the beginning of justice”. Justice is called for by God, but it does not come easily to humans. Justice speaks of peace, equity, lawfulness and wholeness. 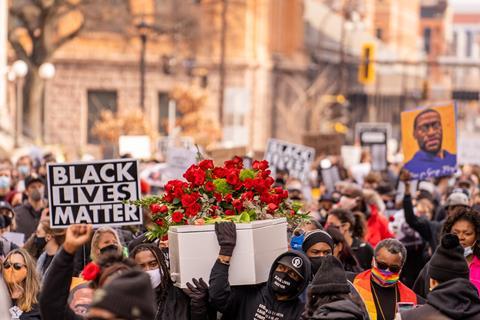 Last night, one white police officer was found guilty of murdeing one black citizen. It is not yet known what sentence the judge will hand down, but whatever happens, George Floyd will not be brought back to life. His family have lost him forever. They are left only with memories.

Whatever happens in this case will not make right the dehumanisation and murder of millions of African people by white supremacist action over the centuries due to the transatlantic slave trade, chattel and plantation slavery, colonialism and the systemic racism that still endures. Whatever happens in this case will not resolve the disproportionate numbers of African Americans caught up in the US prison system; whilst accounting for only 12% of the adult population, they make up 33% of the total prison population. Nor does whatever happens in this case mean that African Americans need no longer fear their next encounter with a law enforcement officer, even over something quite trivial; that it won’t escalate and, ultimately, lead to their demise.

The Christian faith that George Floyd and his family espouse calls us to pursue justice that is transformational because it is backed by just laws that recognise the equal humanity of all human beings; laws which no one is above and no one is beneath. Christian faith calls for justice - not as an event, but as a process engaged in by all as one humanity made in the image and likeness of a creator God.

This guilty verdict was important; making all accountable under one law for all is even more important.

Bishop Dr Joe AldredBishop Dr Joe Aldred is a broadcaster, speaker and writer. He is part of the National Church Leaders Forum and a member of the Windrush Cross-Government Working Group. He is a Honorary Research Fellow at Roehampton University and a bishop in the Church of God of Prophecy.