Storm Eunice: Today is my fifth day without power. Thankfully Christians don’t need to be afraid of the dark…

The recent electrical outage caused by Storm Eunice has given our columnist, George Pitcher, time to consider the role darkness plays in the Christian faith, and it’s more important than you might think 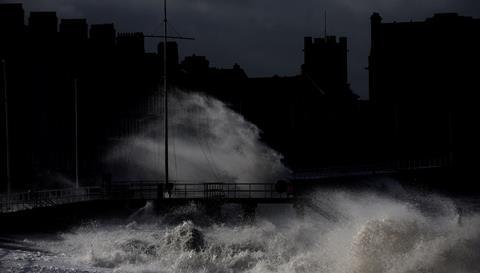 In the first school term of 1974, while I was teaching in a small boarding prep school in the west country, the Three-Day Week started – the rationing of electricity supply that plunged the UK into early-evening darkness. It came about as a result of the government’s protracted dispute with the coal miners. In the stygian gloom of that former stately home, my friendship with the nursery form mistress turned more intimate – a candle-lit cuddle in front of the telly that remained weirdly on, a stolen kiss in a dark corridor.

It was sweet, in every sense. I was 18. As a consequence, I must be one of the few who look back on Edward Heath’s premiership with fondness and gratitude.

Nearly half a century on, we’ve been plunged into darkness again. Some quarter of a million homes lost heat and light as Storm Eunice ravaged Britain and, at the time of writing, we’re in our fifth day without power. As the famous duo sang back in my teenage years: “Hello darkness, my old friend.”

Down the ages, darkness has been associated with its so-called prince, “the enemy” or the devil

For reasons that may have just become apparent, I’ve never really minded the dark. The only fear it holds for me is loss of command and control with the absence of vision. But I’m not afraid of what it contains, precisely because it doesn’t contain anything dark, in the sinister sense of the word.

Down the ages, darkness has been associated with its so-called prince, “the enemy” or the devil. That has more to do with an ancient Greek dualism than with the Christian faith, a kind of eternal duel between cosmic white hats and black hats that implies that God doesn’t have dominion over half of the created order. It’s also a massive cop-out – the all-too-human capacity for evil becomes not what we’re capable of doing without the love of God, but the work of Satan who has led us astray.

Actually, darkness is not the enemy – except perhaps in the limited sense of a power-cut. With the Hellenic duallists we find the word gnophos, which serves as a metaphor for the incomprehensible transcendence of God and the pathetic inability of humanity to understand it (the duality comes from skotos, which is altogether darker in terms of human nature, in every sense).

This is an understanding of darkness which arises, in Church father Origen’s phraseology, only from living in the shadow of the body. Darkness is therefore a mortal quality, through which we labour necessarily with yearning towards a revelation and understanding of the inexhaustible nature of a transcendent love of God. It’s why Denys (or Dionysius) the Areopagite – so called because he was converted by hearing St Paul declaim on the Areopagus in Athens (Acts 17:34) – writes of a God who sends out a “ray of darkness” to humanity, which among much else serves as a contribution to understanding the cry of Christ from the cross.

We’re solidly in the territory of the (much later) medieval mystics here. Developing the Dionysian language of “divine darkness”, which itself has roots in the ascent of Moses on Mount Sinai into darkness and cloud to understand the mind of God (Exodus 19-20), The Cloud of Unknowing develops the idea of a soul suspended in prayer between two “clouds”, the higher of which is the darkness of God which, picking up on the Dionysian “ray”, can only be penetrated by a “dart of longing love”.

These concepts of God’s loving darkness might reach its own apotheosis in the Spanish mystic St John of the Cross’s The Dark Night of the Soul, which takes the nocturnal imagery of the biblical Song of Solomon to divide his night into three parts, the darkest part of which isn’t the hour before dawn, but the “night of spirit” in which the pilgrim is stripped of any sense of self in order to embrace the divine revelation.

This is a theme of darkness recurrent in modern religious poetry, too, not least in TS Eliot’s Four Quartets, where the poet (in Little Gidding) writes of “the uncertain hour before the morning / Near the ending of interminable night”, being the point at which divine understanding is vouchsafed.

Darkness, in this sense, holds nothing to fear, even during the electrical outages of recent days. The darkness isn’t simply the opposite of the light of the world, it is the means through which God reaches his humanity in the Christ.

That may amount, admittedly, to rather more than a post-adolescent snog in a dark school library. Or, miraculously, for some it may not.