Some Catholics want to exclude Joe Biden from receiving communion. Here’s why that would be a mistake

The US President could be denied communion in the Catholic church because of his liberal stance on abortion. The story raises important questions about which issues Christians should divide over, says Chris Goswami 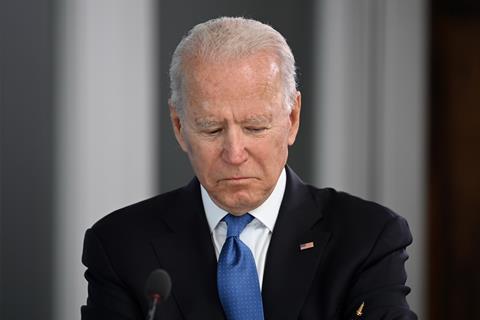 Joe Biden attends Mass every week and regularly speaks about his Catholic faith. But last week the Catholic Bishops of North America voted by 3 to 1 to begin work on statutes that could ban him from receiving communion, because of his views on abortion.

The Catholic Church considers abortion to be a grave sin. But Biden has a liberal stance that abortion, in some cases, is necessary.

It is unprecedented for an openly Catholic President to openly oppose Catholic teaching, so the story has attracted a lot of press.

Important as it is, abortion is hardly the only issue that separates Christians. The list of divisive issues includes gay marriage, capital punishment, climate change and the old one which is still running… women in leadership.

All of these topics are huge and need their own space for discussion, but the thing they have in common is they are also political, ie high on the political agenda of society. This raises an important question: Should the church be involved in political issues of the day?

As a follower of Jesus, I have to answer a clear ‘yes’ to that question. Jesus often debated with governing authorities and attracted crowds at public events. He stood up against injustice and regularly gave speeches pointing to a new order. He would almost certainly have been involved in issues of this nature (although we don’t know what he would have said on an issue like legalised abortion).

The gospel is deeply connected to matters of social justice, and that makes the gospel “political”. Of course, that is different to being “party political”. We certainly cannot claim Jesus for our Lib-Dem or Tory or Republican party (although some try to!).

Christians will never agree on everything. But we can still have unity..

In an enduring marriage, we don’t pretend that we must agree on everything. We agree on some things (hopefully our wedding vows), but then we recognise that the relationship matters more than any specific issue. We learn to “disagree well”.

Similarly, Christian unity means we sign up to core gospel-centric beliefs. I suggest that these are only the beliefs and issues specially called out in the ancient creeds of the church. On every other matter, including life and death issues, we must respectfully disagree, and continue to work together in love and in fellowship.

We need to keep the main thing the main thing – the core doctrines of faith called out in the creeds. Other matters may be supremely important, but they are not matters to split churches or refuse Communion to members.

Learning from our history

Throughout history, churches have ejected individuals on all kinds of matters. Equally, churches have split and whole denominations birthed on topics which, looking back, sometimes don’t appear to be that important.

The Eastern Orthodox and Catholic Church split in 1054 AD (ultimately their split was over a single word).The Protestant Church has divided and split countless times since the Reformation. There are now over 40,000 Protestant denominations (yes, you read that number correctly).

We need to take seriously the commands of Jesus for Christians to actively love one another. This is not an invitation, it’s a command. We don’t have to agree with other Christians, but our God’s expectation is that we to join with them in extending the love of God, and bringing the grace of God.

Let’s also take the trouble to understand the issue from the other side. Sometimes we react in ignorance because we only know what “Christians like us” think – and that can include common mistakes, for example: “Catholics worship saints” (they don’t), or, “there’s no scriptural evidence for infant baptism” (there is). We need to take the trouble to understand why people have a different view, especially on emotive topics and matters of political and social conscience, such as abortion

So, will Biden become the first US President to be denied communion by his Church? Clearly the Catholic church are now considering if his liberal view on abortion puts him so far outside of Catholic orthodox belief, that this would be necessary. If they did proceed with this idea, I believe it would be a mistake, for two reasons. Not only is this not a gospel-centric matter, but Biden isn’t simply the President of Catholics. He’s the President of 330 million Americans. He has a wider remit than the church, and he has the responsibility to represent a spectrum of views of the American public, not just outspoken clerics.