In his ITV interview over the Christmas period, Justin Welby spoke with a prophetic voice, writes George Pitcher. And, in doing so, he found his moral authority 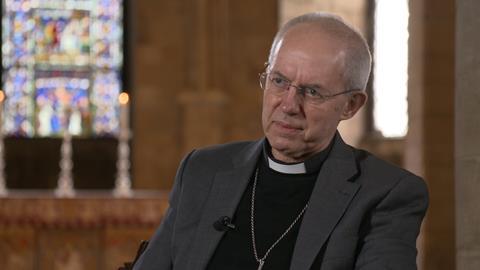 It was at St Bride’s in London’s Fleet Street – the “journalists’ church” - that my training incumbent, Canon David Meara, affirmed my kind of ministry, after I’d got into trouble for condemning Israel’s shelling of Gaza in a sermon. I’d called it “an abomination of biblical proportions.”

“Ah, you see, George,” he said sitting back with a glass of something pleasant in the local wine bar, “I have a priestly voice. But you have a prophetic voice.”

Christian disciples – especially those of us in priesthood – are called to emulate the Christ’s “threefold office”, first developed by the third-century Greek patriarch Eusebius, of priest, prophet and king. We don’t tend to channel the third of those beyond observing that our faith rules pre-eminently over the world’s “principalities and powers” (Ephesians 6:12); we leave childish aspirations to being “world king” to the (very) odd politician.

These voices are not mutually exclusive. The gospels reveal a perfect balance between them – between, for example, “your faith has made you whole” (Mark 5:34 - priestly) and “there shall not be left here one stone upon another” (Matthew 24:2 - prophetic). But it’s the difference between seeing the person and their position through the prism of the Christian faith.

This week, on Tuesday, Archbishop of Canterbury Justin Welby found his prophetic voice, in an interview for ITV’s News at Ten in the crypt of Canterbury cathedral. To date, Welby’s voice has been almost painfully priestly – sympathetic of human fallibility and slow to judgment (which I’ll come to in a moment).

A case in point came exactly two years ago, when he appeared to defend Prince Andrew against sexual-abuse allegations: “Everyone makes mistakes” and we shouldn’t call royals to be “superhuman saints.”

That was priestly. By contrast, on Tuesday, Welby appeared to have grown a pair. Of voices, that is – and a prophetic tone came through.

Arguably, that’s because his interviewer, ITV’s Julie Etchingham, didn’t give him anywhere else to go. Etchingham is forged in ITV’s election leadership debates, where the task is to stop garrulous politicians talking too much while saying too little, and clearly she was in no mood to brook platitudinous answers.

She started with the Guardian’s picture of the Prime Minister’s gang snarfing wine and cheese in Number 10’s garden in summer 2020 when the rest of us were locked down and thus barred from behaving similarly. Welby started in priestly mode (“I thought that’s going to be more work for the person doing the investigation”).

Etchingham’s supplementaries are worth noting in full: “But these are the people making the rules, Archbishop”; “[the] strain [on Government officials] is nothing compared with people working in ICUs… sometimes it’s about speaking about what is right”; “this is about culture, though, and the moral authority to lead”; “it means this… prime minister hasn’t [obeyed the rules]”; “it’s essential because… it costs lives not to have [moral authority]”; “were you angry when you saw [the photo]?”

Indeed, hers was the prophetic voice. And Welby willingly followed where it went: “What is right is to keep the rules… the cost of leadership is to set an example”; “You lead from the front which means you obey the rules”; “truth, integrity and moral leadership are essential”; “I’ve seen in critical care the cost… on people saying goodbye to their loved ones”; “I felt real disappointment and sadness [when I saw the photo]”.

That prophetic voice set the tone for the rest of the interview. He said that getting vaccinated is “a moral issue”; he condemned policies that caused horrific slum conditions in social housing which an ITV investigation had exclusively revealed. And he very pointedly paid tribute, with tears in his eyes, to the Queen’s continued dedication to duty and service to the nation, as revealed at the funeral of Prince Philip. The intended contrast with the current government couldn’t have been more obvious.

Here was an Archbishop of Canterbury arguably doing what he’s meant to do in a noble tradition that stretches back to St Thomas Becket. Speaking truth to power, holding worldly politics to account, standing in the corner of the vulnerable against arrogant elites. It’s saying it as it is, calling out wrong-doing, showing which way is up.

It’s getting stuff out there and done. And arguably that’s what an archbishop has to do. If I may so, it’s what we tried to do when I spent a year as Welby’s predecessor Dr Rowan Williams’s Secretary for Public Affairs. And there should be no regret in the disruption it causes.

In one sense, Welby’s was a Christmas message more powerful than anything we might hear from a cathedral pulpit. In the penitential season of Advent, the traditional themes for preaching are death, judgment, heaven and hell, the Four Last Things that humanity faces. He probably hadn’t set out to, but Welby covered all four in his ITV interview.

Judgment is a tricky one. Advent looks not just to the coming of the Christ child at Christmas, but to the second coming of the Christ in the End Times, when all of humanity is judged. The judgment of the wicked by a wrathful God, separating the wheat from the chaff with a winnowing fork (Matthew 3:12), is an unfashionable theological concept in the 21st century.

But there’s another way of looking at it. We are called to deploy our own human judgment to discern the sacred from the profane.

Early in his interview, Welby was in his customary priestly voice (as previously with Prince Andrew and others): “I’m not quick to judge people”. But as we saw he subsequently did precisely that, and did so effectively, if sympathetically.

Critical judgment of the Government, the way we do business, how we protect those who need our protection (and Welby was very sound on desperate migrants at lethal risk in the Channel) are all legitimate targets for those of faith. And they require a prophetic voice, which Welby seems to have found this week.

In any event, if the Archbishop of Canterbury doesn’t have – and demonstrate – the moral authority to make such judgments, in the image of God that we all bear, then who does?