After the Bishop of Oxford broke ranks recently in support of same-sex marriage, Rev George Pitcher explains why Christian marriage is, and forever will be, the preserve of a male and female union. But, he says, the Church would do well to consider blessing same-sex partnerships – the distinction is an important one 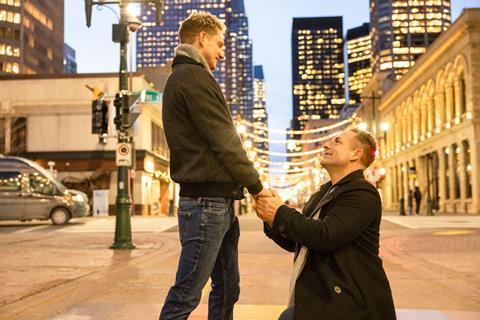 So, here we go again. The bishops, led by Rt Rev Steven Croft, Bishop of Oxford, have been debating “equal marriage” and next month they’ll come up with a recommendation to go before the Church governing body, General Synod, which meets next February. The tide is turning in favour of same-sex marriage in The Church of England.

The trouble here is that the argument is invariably framed – in the secular media at least – as a battle between Traditionalists versus Liberals or, more conveniently for the latter, Bigots versus Progressives. This effectively disables any meaningful attempt to explore the Christian understanding of marriage, an exercise that one might have thought was fairly central to the issue.

The definition of marriage

Christian teaching about marriage is not, as some would have us believe, about two people who love each other making a lifetime commitment to one another. Not principally anyway (however much some campaigners would wish it to be reduced to that).

In the preface to the wedding service, the meaning of Christian marriage is carefully defined. First and foremost, it is “a gift of God in creation”. That means that it represents the means through which humankind is propagated through the male and female. The preface continues that “it is given as the foundation of family life in which children are born and nurtured… and grow to maturity in love.”

At the mention of children, the “gotcha” point most regularly offered by same-sex campaigners is that the Church regularly marries couples who won’t have children – because they choose not to, or are too old – or, indeed who can’t – because of medical reasons.

But that’s not the point. The point is one of conjugality; marriage is a celebration of the gift of the male and female in creation and their unique compatibility in the process (and indeed mystery) of creation. Christian marriage is beyond symbolic of that act of creation; it is its very paradigm.

That is what marriage is in the Christian tradition. Now, we can pretend otherwise, or we can make it something else entirely, but it’s really no good to pretend it’s something that can simply be liberalised to include other kinds of couples. That is just what it is.

The Church isn’t here to follow social demands; it is here to be society’s conscience

But let’s glance down the road at the pretence that it is something else – just a celebration of love and commitment, perhaps. You don’t have to be a red-faced and white-knuckled major from the shires, blustering speciously that “they’ll be saying I can marry my labrador next”, to see where that (exclusively human) commitment to love rationally develops.

If marriage is solely about love and commitment, there cannot be a logical case for arguing that father shouldn’t be married to daughter or a woman to her sister. They could – and sometimes do, after all – commit to live in love together.

Unless, of course, we’re confining marriage to romantic love. But eros, the ancient Greek definition of romantic love, barely makes an appearance in the marriage service. And then it only appears as a means of procreation – and we’re back to those more simple symbols of the creative process again.

The Labour MP Ben Bradshaw has been leading the political charge lately for same-sex marriage in church (it is of course legal and readily available outside church). Broadly, his points are that the Church needs to get with the programme and serve the society in which it finds itself. And, if it can’t, then parliament needs to act to make it do so.

The kindest words for these arguments is that they’re mischievous. The first is just plain wrong – the Church isn’t here to follow social demands; it is here to be society’s conscience, sometimes to be a thorn in its side, to do what is right by the divinity it follows.

His second point carries a veiled threat, that if the Church doesn’t do what his supporters tell it to do, then the legislature should take over. That points firmly towards disestablishment of the Church, kicking the bishops out of the House of Lords (so no wonder, perhaps, that bishops are steadily coming around to his view).

Funnily enough, Bradshaw is right on this last bit, but for the wrong reasons. Now that the King presides over two entirely different definitions of marriage, the secular version as head of state and the Christian version as supreme governor of the Church, there may well be a case for disestablishment. But here is also the key to this…

Same-sex couples can now be married by the state and enjoy the same fiscal and legal status as any other kind of married couple. They just can’t be married in church, for substantial reasons that I hope I’ve adumbrated.

The Church is, alleluia, in the business of blessing God’s love wherever it is found. And it is as undoubtedly as it is joyfully found in same-sex couples. In my view, we should have had a liturgy for blessing civil partnerships. But that doesn’t make them marriages, which I hope I’ve demonstrated are something different.

That difference is one of importance, but not of superiority, because we believe in human equality before God, not uniformity, which saps the uniqueness in humankind. And, ultimately, that means we can’t have everything that others have, just because we think we want it.