Despite persecution by extremist Hindu factions, there is a revival happening among India’s Sikh community in the Punjab that is now attracting the attention of the national media. You can’t stop the work of the Holy Spirit says Bishop Joseph D’Souza 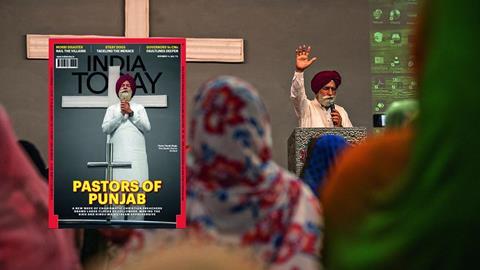 The revivals that are taking place among Indians in Punjab are incredible. You’ll read over and over about answered prayers and unexplained miracles. You’ll hear of divine deliverance from drug addictions and terrible diseases, or entire families receiving a vision from Jesus himself.

It is a story which tells the tale of an indigenous, Sikh revival. This isn’t the work of Western missionaries in Punjab, and includes not a hint of Western influence.

There are no fraudulent conversions, no monetary kickbacks, no outside forces looking to destroy a culture. Not a single example of coercion can be found when reading about the ongoing miracles in Punjab. It’s simply a story of Jesus coming to live and dwell among humanity through his Holy Spirit.

Yet India Today’s cover story is likely to increase attacks on Christians in the country. Right-wing Hindu factions continue to accuse Indian Christians of forced conversions, when what is really at play is a divine visitation by Jesus and his Holy Spirit These stories further refute the need for proposed anti-conversion laws; Indian Christians are not involved in any sort of illegal activity, they are simply practicing their faith within the guarantees afforded to them by the constitution. God is doing the rest.

The power of Christ

This is not about defaming or replacing Sikhism in the Punjab. Pastor Singh has remained a cultural Sikh, even though he now follows and worships Jesus. And why shouldn’t he? He is not looking to create a Christian sub-culture. Many Sikh leaders and pastors are bi-vocational, continuing with their agriculture occupations while sharing about Jesus with their neighbors and friends.

The great Indian apostle, Sadhu Sundar Singh, remained a cultural Sikh all of his life, while travelling across India and beyond teaching about Jesus. It was the physical appearance of Jesus that turned his life upside down too, and he continued to experience the miraculous throughout his life.

The India Today story rightly points out that this latest move of Jesus and his Holy Spirit is mainly taking place among the poor and marginalised communities. But this phenomenon has touched society at all levels, including the wealthy and powerful. It is reminiscent of Paul’s letter to the Philippians that the gospel had now spread even among the household of Caesar (Philippians 4:22). It is absent of any of the proselytisation that extremist groups accuse Christians of; rather it is testimony to the power of God which is active when Jesus is authentically preached, and when his lifestyle is practiced.

As Jesus said: “The wind blows wherever it pleases“ (John 3:8). Anti-conversion laws cannot stop a divine movement; humans - including Christians - have no control over what God does and how he chooses to do it. This is what the Roman Empire found as they demonised, tortured and killed the first followers of Christ, thinking that this would somehow stop the activity of the Holy Spirit. But exactly the opposite happened, and the early Church flourished.

Despite extremists seemingly bent on driving a wedge between the religions, it is clear that Indian Christians can peacefully co-exist with their Hindu neighbours. For the past 2,000 years, Jesus has been fulfilling the deepest aspirations of people of all religions and none. Humans are hard-wired to desire connection, dignity, freedom from oppression and equality. We have observed these answered prayers time and time again across India, and throughout the world.

Waging a war against an individual’s personal experience of the Holy Spirit will, in the end, prove futile, because these developments are entirely supernatural, peaceful and will not destabilise society. The fruit of what God does is always good.