How prayer brought down the Berlin Wall

Saturday marks 30 years since the fall of the Berlin Wall. Pete Greig, founder of the 24-7 prayer movement, tells the remarkable story of how a Peace Prayer Rally grew to 300,000 participants in the weeks leading up to November 9, 1989, and how communist officials were prepared for every eventuality, "except candles and prayers"

In the city of Leipzig in communist East Germany, a 13-year-old was looking around in amazement at all the candles and people crammed into St Nicholas’ church to pray for peace.

There were barricades in the streets outside, beatings and death threats from the authorities, and hundreds of armed police expecting a riot. Markus Lägel felt like a small part of something very big – anonymous and special, excited and nervous at the same time.

Markus glanced nervously at his father, a burly miner who worked in one of the open mines nearby. With his minimal wage supplemented cynically by daily bottles of vodka from the government, and with almost nothing to do after work but drink the stuff, Markus knew that his father belonged to a broken generation of men reduced to alcoholic dependency on their jobs.

And of course, it was especially hard to be a Christian under one of the most repressive regimes in the world. The ever-present fear of conflict with the West weighed heavily on everyone. Germany had become the front-line in a Cold War stand-off between nuclear powers. The prevailing feeling was fear. So the pastor of Leipzig’s most dignified church, a man named Christian Führer, called people to pray for peace every Monday night. At the start there were often less than a dozen people, huddled together in this cavernous, Gothic barn where Johann Sebastian Bach had premiered some of his finest choral pieces.

But they had persevered and now, seven years later, Markus looked around in amazement at 8,000 people crammed into the church. Outside in the streets and in other churches there were as many as 70,000 people - the largest impromptu demonstration ever witnessed in East Germany since it had been formed after the Second World War. 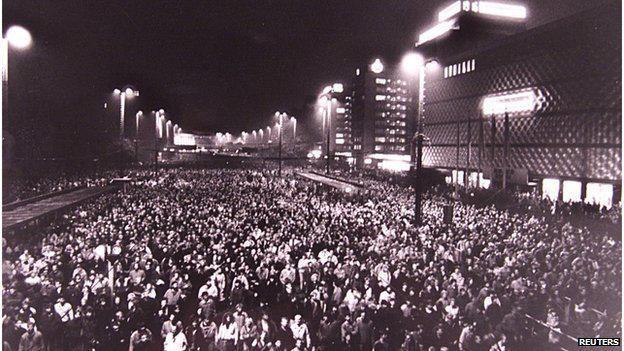 With so many people expressing their protest in prayer, the State was preparing for anarchy. In fact, they had threatened to shut the Prayer Rally down that very night, Monday October 9th, adding ominously ‘with whatever means necessary’. Markus heard that doctors were setting up emergency clinics, expecting a blood-bath. On the way in he’d glimpsed shadowy figures on the rooftops with guns. It was terrifying. He studied the tiny flickering candle in his hand and thought about the tanks in the street outside. Surely, this was crazy; attempting to fight military hardware with prayers? He looked up at his father, at the crowds cradling candles like stars and for a moment their voices all crescendoed. Yes, there was power in this too. Perhaps it was the authorities who were crazy to fight prayers with guns? One way or another, they would soon find out.

For those who never lived in its shadow, the demise of the Berlin Wall, which separated the communist east from the capitalist west for 30 years, may seem to have been inevitable all along. But for Markus Lägel and thousands like him who knew nothing but the concrete realities of communism, and armed only with prayers, nothing seemed more inevitable than guns, tanks and vodka.

After about an hour the pastor led the congregation out onto the Augustusplatz. Still clutching their candles they marched past the Headquarters of the dreaded secret police chanting ‘No violence’ and praying that it might be so.

Surprisingly the police never opened fire. There would be rumours later of deals done in high places. Whatever the reason, within a week the Peace Prayer Rally had grown to 120,000 and the East German leader had been forced to resign. Within a fortnight the Prayer Rally attracted 300,000 protestors and within a month – four weeks later to the day - the Berlin Wall came tumbling down. Some journalists and historians have identified the Leipzig prayer rallies as the tipping point in the fall of East German communism – a remarkable acknowledgement for a movement that began so quietly seven years earlier, with a handful of people at a prayer meeting. One communist official from Leipzig made an extraordinary, unguarded admission to a journalist: "We were prepared for every eventuality," he said. "But not for candles and not for prayers."

The greatest theologian of the 20th century, Karl Barth, said that "to clasp the hands in prayer is the beginning of an uprising against the disorder of the world." And in Eugene Peterson's classic book 'The Contemplative Pastor' (which, let's face it, sounds about as harmless as a book can be) prayer is described as "a subversive activity [that] involves a more or less open act of defiance against any claim by the current regime."

The Leipzig Prayer Rallies embodied the defiance of praying for the Kingdom of God to come on earth and the power of crying out to the Lord of Lords for regime-change. It’s tragic that the most revolutionary cry in world history: "Let your Kingdom come" is so often reduced to a religious catch-phrase, short-hand merely for a few less people leaving our churches, and a few more homeless people receiving a tuna sandwich on Friday nights. By contrast, the former Dutch Prime Minister Abraham Kuyper understood the revolutionary implications of Christian allegiance (and I can almost imagine his hand trembling with a mixture of terror and excitement as he wrote these words): "There is not a square inch of domain of our human existence over which Christ, who is sovereign over all, does not cry: 'It is mine!"

Christians are called to welcome Christ into every "square inch of domain of our human existence". This means that, whenever we see the tyranny of enemy occupation at work in our own lives we try to pray for Christ's Kingdom to come instead. Wherever we see oppression, among the poor, in our educational systems, in government, or even in the church, we use our free wills to say defiantly: "Not my will but your will be done".

When we pray in this way, it’s like those urgent messages tapped out in code by resistance fighters far behind enemy lines in the Second World War. Our prayers light up landing-strips for the invading forces of heaven. And when we come together to do this in sufficient numbers, we can move from small-scale guerrilla warfare to publicly defying tanks and guns and governments with our prayers for liberation

Having spent his formative teenage years caught up in those peace prayer rallies in Leipzig, when the communist regime finally fell, Markus Lägel knew for sure that prayers are more powerful than violence. He had witnessed, first-hand, the strength of concerted intercession to undermine any ideology that oppresses. Watching consumerism now usurping communism in Eastern Europe, one form of oppression for another, Markus began a spiritual journey that was to make him a pioneer in the 24-7 story.

Pete Greig is the founder of the 24-7 prayer movement and the author of a number of books including, Red Moon Rising (with Dave Roberts), from which this article is adapted and used with permission.

Pete GreigPete Greig is the bewildered founder of the 24-7 Prayer movement and the Senior Pastor of Emmaus Rd church. His latest book is How to Hear God: A Simple Guide for Normal People.