Church leaders are calling on governments to 'repent' for Covid ‘totalitarianism’. I won’t be joining them

Prompted by what signatories consider "an emergent totalitarianism of the State over…the Church”, a new statement is urging governments to "repent" lest they "become liable to God’s wrath”. The Frankfurt Statement, which references the Covid pandemic and has been signed by hundreds of church leaders, suggests mass media and governments have been guilty of "fear-mongering, propagandizing, and indoctrination”. But Jared Stacy, who is writing a PhD on evangelicalism and political conspiracy theories says the statement consists of “panic-driven theology” 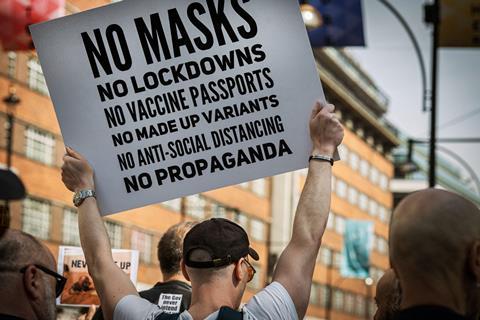 This week, a group of reformed evangelicals published a declaration of protest against “emergent totalitarianism” in the political response to Covid-19.

The Frankfurt Declaration is not to be confused with a 1951 document with the same name, penned in West Germany in defense of democratic socialism.

This new declaration was published and signed by a international coalition. It isn’t reflective of evangelicalism writ large, but a particular in-group. This group in the past has been associated with statements critical of social justice and what they saw as assaults on biblical norms of gender and sexuality. Notable signers include Dr John MacArthur and Dr. Voddie Baucham. The declaration was signed by several UK-based church leaders too.

Throughout history, the Church has hosted an ongoing back and forth dialogue with the State. The church father Ambrose of Milan wrote to Emperor Theodosius in AD 390 calling him to repent. The Frankfurt Declaration attempts to join this dialogue. But it is better understood as a document of panic-driven theology.

The five articles in the statement conceive of the State as an intrusive, morally bankrupt, untrustworthy and authoritarian political order restricting the freedom of the Church, particularly through its health policies during the pandemic. It never stops to ask: which government? How many of these policies are still enforced? And more importantly, what must we do as Christians in a pandemic? I’m trying to imagine UK churches in the second world war writing to the government in protest at having to turn their lights off for the blackout during the Blitz.

Scholars understand conspiracy theories as a form of panic rooted in fear of government control. The Frankfurt Declaration is textbook panic dressed in theological language. It points to “global trends” of technological surveillance “undermining human agency.” These are real world problems, that demand complex moral consideration, not panic-driven, theologically-dressed hysteria. The declaration states these actions transgress God’s mandate for government, which it believes has dispensed with the divine knowledge of good and evil.

It affirms God has revealed “an unchangeable morality” in both scripture and human conscience, sourced from his character. It denies any “earthly authority” has the right to to define morality. Yet all through the declaration you can trace this argument: the Church, not the State, possesses the knowledge of good and evil. The declaration (wrongly) assumes the Church’s access to and interpretation of the scripture is the same as God’s true knowledge of good and evil. This is problematic. It presumes to know as God knows, confusing its interpretation with God’s judgement.

The statement ends with a call for respect to righteous leaders, it demands guilty leaders to repent, and calls the Church to resist. I would have liked to have seen a Christian call to peace in a political moment infused with populism and increasing threats to violence. But that is not in the declaration.

The Frankfurt Declaration continually emphasies “rights”. The entire declaration, according to the introduction, claims “an emergent totalitarianism of the State over all realms of society…” with a “disregard of God-given and constitutionally guaranteed rights.” This grievance is the point of gravity around which everything orbits. I believe the pandemic has revealed a zeal for rights among Christians which short circuits our ability to conceive of Christian responsibility.

I’m not saying rights don’t matter. Instead, rights are a positive legacy of Christianity at work in our politics. Rights have served to advance justice and righteousness. But if pastoring during the pandemic showed me anything, it’s that we have discipled Christians into an impoverished moral imagination. I’ve kept a prayer request list I came across during the pandemic. It lists a “praise” for someone getting a vaccine exemption, and a “request” further down for an unvaccinated family member on a ventilator. That person died. When we elevate “rights” to the neglect of responsibility, our prayers are paradoxes at the feet of Jesus.

The declaration never offers a word of consolation for the millions dead in the pandemic. It shows a callous and anti-Christian regard for life. It claims to speak for truth, but trades in Covid denial language: “We thus reject all forms of medical coercion and any restrictions on individual freedoms for people who are not infected with any contagious, life-threatening disease.” It goes on to name masks, vaccine passes, and social distancing as examples of this coercion.

The declaration is a bitter revelation of how “rights” matter more than responsibility in our moral imagination. I say this not to diminish the value of rights as a political concept, but to elevate what has long been eclipsed in our warring culture. We ask, “who is threatening us?” but not “what must we do?” To quote Dr Stanley Hauerwas: “When we conceive of the moral life solely a matter of rights we tend to produce people who can only yell at one another that their rights have been violated.” And this declaration is screaming.