Christians, climate change is not an environmental campaign – it’s a racial justice issue

Instead of taking responsibility for clearing up our climate mess, Britons are pushing that burden onto Black and Brown people in the poorest communities around the world, says Holly-Anna Petersen 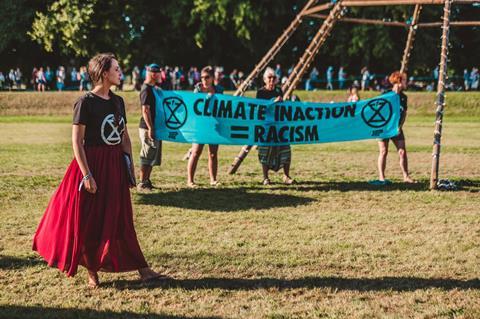 If we continue on our current trajectory, climate change is a crisis that will affect us all.

Science tells us that the delicate biosphere of our planet is reaching a tipping point, after which it is locked into an escalating cycle of perpetual heating. If this happens, our earth will be inhospitable for any human, whatever our ethnicity or race. We will all meet the same end.

If this is the case then why is the climate crisis referred to as a racial justice issue?

Earlier this year the development charity Christian Aid launched a campaign with the tagline, ‘same storm, different boat’. The point being that while the climate crisis is an existential crisis facing us all, right now different parts of the world are experiencing it differently. The truth is that it is generally Black, Brown and Indigenous people around the world who are seeing the effects of climate change first and worst. Many of these communities are already having their lives ripped apart.

This year Pakistan experienced the worst flooding in its history, which led to the displacement of millions and the deaths of over 1,700 people. The intensity of the floods was due to heavier than usual monsoon rains and melting glaciers that followed a severe heat wave – all of which are linked to climate change. The Secretary General of the UN, Antonio Gutierrez, visited the region and said: “I have never seen climate carnage on the scale of the floods here in Pakistan.”

Another clear example from this year is the devastation in Uganda, where entire villages were deluged. The destruction of crops, homes and infrastructure led to local people losing their livelihoods and communities displaced into makeshift camps.

What does loving our neighbours across the globe look like?

As well as people of colour being the main victims of climate change, they are also the communities doing the least to cause climate breakdown. In fact, it is the Global North (defined as the United States, Canada, Europe, Israel, Australia, New Zealand and Japan) who are responsible for 92 per cent of excess global carbon emissions.

When it comes to the UK, our share of responsibility begins with an acceptance of the impact of the Industrial Revolution – the key moment in history that triggered rapid increases in fossil fuel use. But even now the UK Prime Minister refuses to make climate change a priority, as she boasts about lifting the ban on fracking, which would lead to the leaking of millions of tons of greenhouse gases. Is it the case that while climate change is not quite on our doorsteps, it is not in our minds? Or maybe it’s that climate change is not yet killing people who look like Liz Truss – affluent and white – so she doesn’t feel the urge to take action?

Sometimes climate campaigners can be accused of being unpatriotic when we point out the role of the UK in climate change. Is love of country really so fragile that it can’t stand having a mirror held up to it? Surely if we are truly patriotic, we not only celebrate the strengths of our nation, but also get stuck in doing the hard work of making the country better? When the truth gets laid out clearly – and it can be hard to hear this – we will be depicted as climate criminals in this era of history.

Instead of taking responsibility for clearing up our climate mess, we are pushing that burden onto Black and Brown people in the poorest communities around the world. Already these countries are having to use vital financial resources to adapt to climate change they haven’t caused – money which could be spent on healthcare, education, or poverty alleviation. The UN warns that developing countries could face a combined adaptation bill of $300 billion a year by 2030.

In 2009 rich, polluting countries, including the UK, promised to give a collective $100 billion a year in climate finance by 2020, as a contribution towards this cost. To put this number in context, the total amount is less than the UK alone is spending on HS2. Despite having eleven years to come up with the funds, the promise has still not been fulfilled. I wonder whether this promise would have been broken so quickly if it were white people we were cheating.

Another burden we are pushing onto Black and Brown people is the burden of protest. We know from social justice movements of the past that change requires huge sacrifice – Martin Luther King spent time in prison, Suffragette Emily Wilding lost her life for the cause of women’s rights. While we sit in the UK wondering whether we have enough time to take to the streets, a staggering 1,700 environmental activists have been murdered in the last decade in places like Brazil and the Philippines.

As Paul writes in his letter to the Ephesians, we are all part of the body of Christ. Whatever our skin colour, and wherever we are in the world. We are one body, and when one part suffers, we all suffer. So what does loving our neighbours across the globe look like? Surely as a first step, we need to stop inflicting climate suffering on them and actively work together for a safer world.