Christians cannot stand for the erosion of truth. Boris Johnson will have to go

As Christians, we should be advocating for truth and justice in our political system, says the Evangelical Alliance’s Danny Webster, as he criticises Boris Johnson’s “half-hearted” apology. 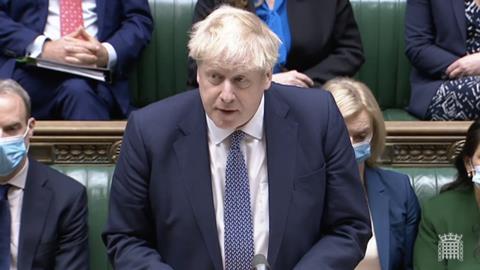 Is it possible to attend a drinks event where staff are encouraged to bring their own booze and think it was a work activity rather than a gathering that was at the time against the law?

That is what Prime Minister Boris Johnson is suggesting. In his statement at the start of Prime Minister’s Questions yesterday he said that the gathering on 20 May 2020 may technically have been within the rules. I’m not so sure. At the time the peak lockdown restrictions were still in full force. You could be outside your home for only a very limited set of reasons, one of which was to go to work if you were unable to do that from home. You could meet one other person for the purpose of exercise. The guidance for businesses at the time stressed that efforts should be taken to avoid staff gathering together, and when the Evangelical Alliance began to reopen our office later that summer I recall being part of detailed conversations as to how to manage the workspace to minimise mingling.

Boris Johnson’s words were very carefully chosen to avoid admitting that what took place was against the law, or at the very least against the guidance. For Boris Johnson and his wife Carrie – and I give the caveat that I’m not a lawyer – I suspect they didn’t break the law because they were in their own home. But for everyone else attending, as soon as their need to be away from the home for work ended, they were breaking the law by staying for the drinks.

I do not think Boris Johnson will recover from this

I recall the date clearly because I spent much of 20 May 2020 yoyoing back and forth to a hospital as my wife was about to give birth. After being forced to wait in a corridor, we were sent home, only to return a few hours later (about the time of the drinks gathering) and our daughter was born in the early hours of the next morning. When she was two hours old I was ushered out and didn’t see them again for two days.

This week many have shared their stories of the heartbreak, struggles and sacrifices due to missing last days of loved ones and not being able to comfort the grieving. It is not only because of this, but it does force many to view more critically the casual disregard by those in charge for the rules propagated for public compliance.

I do not think Boris Johnson will recover from this, because despite the orchestrated tweets providing support and backing the inquiry into the parties by civil servant Sue Gray, it is the MPs of his party who will decide his fate. At the end of the day the public can only protest, and the opposition can only plead, but it is Conservative MPs who can force a change in the Prime Minister. And that means they will do so if it serves them.

Many MPs were elected to seats in 2019 that had rarely backed the Conservatives so there is a precariousness about their position. If they think Boris will help them hold their seats, they will continue to back him, but when he is recognised as a liability to their electoral prospects their support will wane. It is not all electoral calculus, but it does play a significant part.

The other key component, and this affects timing, is who replaces him and when they want to do that. The Conservative Party has a record for being brutally quick at disposing leaders when they want to, but party rules allow only one no confidence vote every 12 months so the timing matters. Likewise, with local elections in May a new leader may not want to come into power facing an immediate hammering at the polls. The mechanics of a leadership contest matters too, for the Conservative Party, their MPs determine the first few rounds of any election, with only the final two candidates going through to a vote by the wider membership. There’s likely to be some shenanigans of who stands in order to try and influence who gets through to that final ballot.

All this manoeuvring takes some time. Therefore, while I think Boris will go, I think his party will let him stagger on for a few months. That is until the next revelation that makes it untenable for him to stay a day longer, and then all that I’ve said is expediated and a contest starts the next day.

For Christians watching on, and particularly for those with a political anorak disposition such as myself, it is easy to get caught up in the drama of who is up and who is down. Who is positioning themselves, whose tweet included the most caveated support, who was the slowest to provide their confidence in the Prime Minister’s leadership? As I’ve noted elsewhere criticising political leaders can easily drift into partisan preferences, but that should not be an excuse to be muted when integrity is on the line and we witness manifest failures to act with the propriety and responsibility for the office that is held.

In recognising that politicians are human, and political leaders make mistakes, we can make room for grace, and the simple truth that we all get things wrong. We should not hold politicians to an unrealistic standard which would suggest they are, or perhaps should be, a different breed than everyone else.

But accepting that people make mistakes and get things wrong is very different from a free pass for every indiscretion and the idea that a half-hearted, very conditional apology makes the problem go away. As people who believe in truth, and hold that truth is the key to finding freedom, we have to hold our leaders to account and promote goodness as more than just compliance with technicalities.