We live in a world of imperfection and moral murkiness, says Tim Bechervaise. But Christians can watch and enjoy the World Cup while acknowledging the dark shadow that hangs over the tournament. Here’s three reasons why he’s not joining the boycott 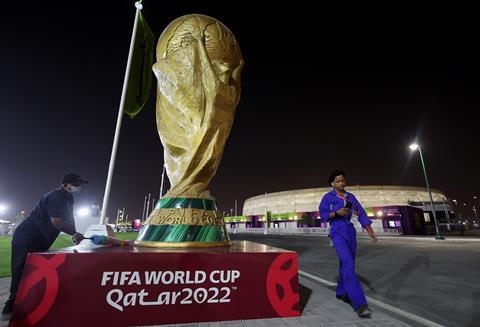 “So, are you looking forward to the World Cup?”

If there’s one question that’s emerged more than any other in recent conversations, that’s the one. The answers tend to share the same sentiment.

This is followed by a list of reasons why this World Cup just doesn’t seem quite right. But for many, there was an expectation that, once it got going, a semblance of excitement would emerge. That’s been true for me, helped by a few surprise results and one decent England display.

However, I cannot altogether escape the dark shadow that hovers over the tournament - from FIFA’s corruption and blind ignorance to Qatar’s issues with human rights and freedom of expression. So, while it’s been nice to focus on the football, the backdrop remains highly troubling.

But unlike many people - including Dave Landrum and James Pratt who have written on this site - I’m not boycotting it. And here are the reasons why:

While it is absolutely right that FIFA and Qatar - and other relevant bodies - are called to account for their flagrant wrongdoings, I don’t believe those who love football should be deprived of enjoying the tournament, especially as they had no say in deciding who hosts it.

While boycotting the tournament is a commendable thing to do, I’m not sure what difference it’ll make

While I respect those choosing to boycott it, judgement shouldn’t be cast on those who do. It’s for this reason I take issue with James Pratt’s assertion that he doesn’t think Jesus would watch it, because it implies that those who do are doing something wrong.

What about the father who sees the tournament as an opportunity to bond with his child? Or the person living on their own and who enjoys the company of football? How about the family hit by the cost of living crisis finding some welcome relief in filling in their wall chart as the action unfolds? Or the church who uses the tournament as an ideal opportunity to reach their community?

God has filled the earth with good things to enjoy (1 Timothy 6:17), including football, which has a beautiful ability to unite people, especially during a World Cup. Across the world during this year’s tournament, relationships will form and deepen, and people will come away enriched by the company of others - and perhaps impacted on a deeper, more spiritual level.

One person’s conscience shouldn’t dictate another’s, particularly as we live in a world of imperfection and moral murkiness (1 Corinthians 10:29-30). This infiltrates all parts of our lives, even when we are unaware of it, but that need not stop God’s grace enabling us to enjoy the good that can emerge from it, while making important ethical stands where we can.

2. The Holy Spirit at work in Qatar

For Christians in Qatar - which includes a minority who can face persecution - the World Cup is a ‘golden opportunity’ for God to do something special in their country.

By engaging with the tournament, we can join with our Qatari family in praying into what they see God is doing through it. Watching the action unfold has been a helpful prompt to pray.

I’ve been aided in this by the Open Doors World Cup prayer diary, which also includes prayer material for the six other participating countries on their World Watch List: Iran, Saudi Arabia, Tunisia, Mexico, Morocco and Cameroon.

While boycotting the tournament is a commendable thing to do, I’m not sure what difference it’ll make, especially viewed alongside some of the powerful protests that have already made headlines during the World Cup.

Before their first game, the German players posed for their team photo by covering their mouths with their hands to make the poignant message that players, and people, will not be silenced in their protests, despite attempts by FIFA and Qatar to do otherwise.

One person’s conscience shouldn’t dictate another’s, particularly as we live in a world of imperfection and moral murkiness

Most striking was the Iran players who, before playing England, refused to sing their national anthem. It was a powerful show of allegiance to protestors currently facing a brutal crackdown by the Iranian authorities, not to mention incredibly brave - as demonstrated by the recent arrest of Voria Ghafouri, a former international player who has been outspoken in his criticism of the government.

A spotlight can bring support as well as scrutiny, and for many of those more deeply affected by the controversial issues surrounding the World Cup, the tournament offers the very real hope that more lasting change will emerge from it. Indeed, while Qatar has a long way to go in improving their human rights record, there have been improvements since they were given the tournament. This doesn’t justify it being awarded the competition, but shows that good can emerge from it.

For me, engaging with the World Cup - getting clued up on the conversations it is provoking, praying into what God is doing, and celebrating its potential to bring change - makes more sense than boycotting it.