Tolkien: A lovely story, but this biopic fails to portray the great man's faith

When I was at primary school our teachers organised a kid’s version of Mastermind. Like the TV game show, we were asked to pick a specialist subject. For a reason that still baffles me to this day, I chose JRR Tolkien as my topic. I knew nothing about the guy other than that he was the author of The Hobbit, a book I had become mildly obsessed with.

I powered up the dial-up internet (cue that funny noise it used to make), loaded the first website I came across and printed it off. I then preceded to try and cram all of the information into my brain. When the big moment came and question after question was asked of me in front of the entire school, I crashed and burned.

After watching Tolkien, I doubt I’ve learned much more factual information about the life of the creator of Middle Earth than I did from my Mastermind failure.

Tolkien is the latest biopic to be released, following the success of other recent films which tell the stories of notable names (honourable mentions go to last year's Bohemian Rhapsody, I Can Only Imagine and BlackKKlansman).

The film is supposed to tell the coming of age story of JRR Tolkien: his school experiences, his participation in the First World War and the relationship with his wife, Edith Bratt. It opens on the young John Ronald and his widowed mother hitting hard times and moving to Birmingham from their idyllic country home. Unsubtle parallels are drawn between this and the Shire. His mother dies and he and his brother are placed under the care of their Catholic priest.

As he begins at King Edward’s School, the plot links the friendship group of his youth to the fellowship that certain hobbits share in The Lord of the Rings. His experience in the trenches is equally tied to Mordor, showing characters such as the Nazgul marching through the wasteland.

This production portrays everyone in a glowing light. The wartime characters are noble, polite individuals who are wrenched apart by hard times but show unflinching bravery. The sepia-tone sweetness reminded me of Downton Abbey. Some might find it too sickly, but it's also a welcome break from the trend towards grittier and darker Hollywood films.

Lovely though the story may be, it’s unlikely to hold much accuracy. The Tolkien family and estate have pointedly stated that they do not endorse the film. They have been at pains to point out they were not involved in the production and do not approve of it. The chances are, Tolkien is taking some real artistic license. 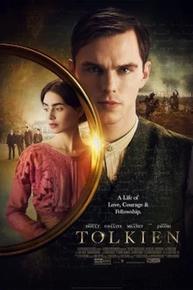 It's unfortunate that Tolkien’s Catholic faith is not portrayed or referenced in any meaningful way. Their family priest is an interesting character, who shows genuine love for John Ronald and his younger brother. He works hard to support the two children and models a beautiful example of what a priest can be pastorally. However, as if often the case in Hollywood, this is never actually linked to his faith beyond that being his ‘job’ or a reflection of his naturally kind character. It may be too much to suggest that this is a factor in why the family are against the film, but it certainly seems like a significant oversight, especially given how Tolkien's work carries so much Christian meaning and depth.

If you're after a sad film that will make you cry but leave you hopeful, then Tolkien will scratch that itch. Any more than that, and you would be better looking elsewhere.

Tolkien is in UK cinemas from today