The making of The Bible

When Mel Gibson’s movie The Passion of the Christ became a global hit in 2004, TV and film bosses realised that the Bible could still captivate public interest. The film grossed more than $600m when it played in cinemas in the US, and became thehighest grossing non-English language film of all time.

Nearly ten years on, another part of the Bible story is being brought to a huge secular audience ? The Bible mini-series will air on Channel 5 this December.

The series dramatises all the major stories of both the Old and New Testaments. Perfect Sunday school fodder perhaps, but what miracle has caused a mainstream broadcaster to dedicate ten hours of airtime to it? Probably the fact that more than 100 million people watched when it aired in the US earlier this year. Yes, the Bible is back, and this is arguably its most ambitious retelling yet.

The project is the brainchild of husband and wife team Roma Downey and Mark Burnett (producer of hit American TV franchises Survivor, The Apprentice and The Voice). Downey, the Irish actress who also stars as Mother Mary in the series, was staggered by the series’ popularity when it aired on the History Channel in the USA.

‘Even Hollywood had to pay attention,’ she says. ‘We were up against a show called The Walking Dead. The morning after we got the ratings through, the headline on CNN said, “God Beats Zombies”, which I loved. You can imagine that every agent in Hollywood was saying “Get me a Bible!”.’

Big success on a modest budget

The success has continued. The US home movie edition sold more than 525,000 units in its first week ? the fastest ever for a TV mini-series. It was recently nominated for three Emmy awards and has already aired in 10 other countries, with a record 40% audience share in Portugal (Diogo Morgado who plays Jesus is a television star there). It has been widely praised, but there has also been controversy. After the scene in which Jesus is tempted in the desert, Twitter was set alight with claims that the character playing Satan resembled Barack Obama.

‘I had been expecting everyone to be talking about the first appearance of Jesus on screen,’ says Downey, who said she was ‘heartbroken’. ‘It was such a shame when the devil got all the press.’

This setback aside (though the press attention did no harm for ratings), The Bible has exceeded all expectations. Filmed entirely on location in Morocco on a relatively modest budget of $20m, major challenges included filming large-scale battle sequences using a stunt team, and recreating the fall of Jericho with powerful explosives.

‘I was pinching myself thinking how something could go from a calling in your own heart to realising it on the screen,’ recalls Downey. ‘There are so many variables when you put a number of chariots and horses on rocky terrain, hurtling at full speed. We were able to CGI enhance many of the battle scenes, so while we had hundreds of extras, by the time you see it on the screen we have thousands.’

The battles were not only on screen. According to Downey there were spiritual battles behind the scenes too. She is convinced that a divine hand brought Portuguese actor Diogo Morgado to the role of Jesus, after they had exhausted all avenues looking for the right person. The filming of his crucifixion scene was especially fraught with danger.

‘We had to put a man on a cross, bolt it to the ground and make sure he didn’t fall on his face. The hillside we selected was very windy ? that made it more complicated. I asked everybody we knew to pray that those days of filming would go smoothly.’

Then they found the snakes. ‘The “snake man” went in, as he did every morning, to clear the set of snakes and scorpions,’ recalls Downey. ‘On any given day he might find one or two snakes. On the morning of the crucifixion he cleared 48 snakes from the foot of the cross. He told us “it was just unbelievable what was up here”.’

Downey believes that prayer cleared a spiritual path for the scenes to go safely. It’s not the only story she tells of a spiritual force at work. On a completely still night they filmed Jesus’ meeting with Nicodemus, in which he speaks of the wind of the Spirit blowing where it will.

‘On cue, what felt like a supernatural wind blew in off the desert. It blew the hair of Jesus, the fire and the trees. Thankfully the two actors had the presence of mind to just hold it together. There were so many beautiful moments like that. Is it coincidence or is it the hand of God?’

Praise from the Church

It was Downey’s own Christian faith that led her to initially suggest the series to her TV producer husband. She freely admits that she is ‘not a Bible expert’, but adds ‘God doesn’t always call the qualified, but he qualifies the called. For what we didn’tknow we found people who did.’ In the end they sought advice from more than 40 respected biblical scholars and had the endorsement of influential US pastors such as Rick Warren and Joel Osteen. 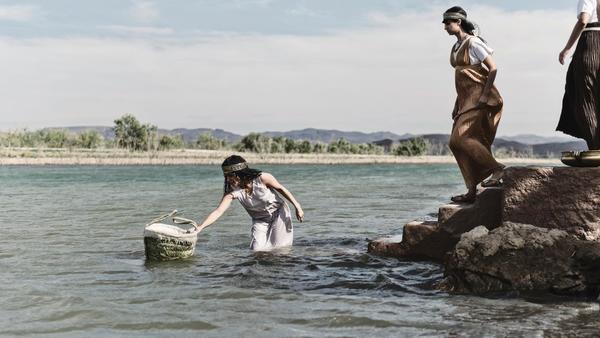 UK church leaders and Bible scholars have also added their enthusiastic backing as it reaches British shores. Rev Nicky Gumbel of Holy Trinity Brompton says, ‘The Bible series is stunning ? superbly acted and beautifully produced. It brings the stories of the Bible to life in an extraordinary way.’

New Testament lecturer Dr Paula Gooder has praised the series too. ‘Attempting to depict the whole span of the biblical narrative from Genesis to Revelation is a bold undertaking. The Bible series pulls it off. It has paid very close attention to the text but at the same time imagined what it might have felt like for the different characters depicted.’

Downey hopes that the series will get Brits talking about the Bible again. ‘I’m hoping that it engages the nation in the bigger conversations about faith and God. I’m hoping especially that young people get engaged. I have teenagers. They thought the trailer was so cool that they aired it at their high school. It gave people of faith permission to talk about it.’ British Christians frequently bemoan the lack of biblical witness on television. With Channel 5 screening ten hours of material throughout December, will the UK Church be ready to make the most of this unique opportunity to ignite the conversation on faith?

Making the most of The Bible TV series

Get your small group together to watch the episodes each week on Channel 5. It’ll be a great discussion starter. Invite a scholar to your church to field tough questions that the show raises about the Bible. Invite non-Christians who have been watching the series. Use clips from the show in a sermon series ? they are freely available for download. The second half of the series focuses on Jesus. Introduce the adult Christ to your community before baby Jesus takes over at Christmas. Share the YouTube clips on Facebook and Twitter as conversation starters. Let your online friends know what you watched on TV last night, and what they are missing...