The Christian faith of Florence Nightingale: The founder of modern nursing

The strange thing about Florence Nightingale is that she gets both too much and too little credit.

Too much for her brief role as the ‘Lady with the Lamp’ in the Crimean War; and not enough for everything she accomplished after that best-known period of her life – a period she regarded as a failure.

Florence Nightingale was born into a wealthy family in 1820, in the Italian city she was named after. Her parents had married in 1818, and both Florence and her older sister, Parthenope, were born during the Nightingales’ lengthy honeymoon in Europe. Although their money came from trade only a couple of generations back, Frances and William Nightingale were able to live lives of cultured leisure and bring their daughters up to be fashionable young ladies.

This lifestyle suited Parthenope very well. She excelled at music and drawing, suitably feminine pursuits. But Florence enjoyed discussions with her father about philosophy. William Nightingale educated the girls himself and Florence soon excelled at languages and mathematics. These accomplishments were only supposed to help her make stimulating dinner-table conversation, and were never intended to lead to a career, but Florence longed for more. Nursing was an early interest. Like many girls, Florence cared for her dolls but, as she grew older, she also tended to the sick on the family’s Derbyshire estate, often spending long hours at their bedsides. She was already forming theories about what was and was not helpful in healing ill people.

At the age of 16, Florence experienced a call from God into his service. Although initially unsure what form that would take, this belief in her vocation eventually led her to nursing. When Florence expressed her desire to become a nurse, however, her family was horrified. The stereotype of nurses at the time was of drunken women with loose morals who nursed the sick because they weren’t fit to do anything else. The only other kind of nurses were nuns.

Neither of these was a suitable occupation for a well-bred young lady. Unfortunately for her parents, their fashionable, intellectual life exposed Florence to many examples of independent women. She knew George Eliot and Elizabeth Gaskell, and became lifelong friends with Harriet Martineau, the first woman sociologist, and Elizabeth Blackwell, the first woman to graduate as a doctor. During her travels on the Continent, Florence had the opportunity to see well-run German hospitals with properly trained nurses. She was desperate to return there.

Her family’s opposition plunged Florence into depression. She expressed suicidal thoughts and could hardly get up in the morning. She had turned away several suitors, believing that marriage (for a woman) was incompatible with a life of action. Eventually, concerned about Florence’s mental health, her family allowed her to learn nursing in Germany. Florence never looked back.

Despite minimal training, she was soon (thanks to her wealth of social connections) placed in charge of the Institution for the Care of Sick Gentlewomen in London. Florence’s talent for administration became clear. She transformed the Institution and was ready for a new challenge – one that would soon present itself.

Britain entered the Crimean War early in 1854, ill-prepared and disorganised. Administrative failures in the army supply chain massively increased loss of life. Conditions for treating injured soldiers were also atrocious. When the situation was reported to the British public, there was an outcry. Florence’s friend Sidney Herbert (whose wife, Elizabeth, had got her the position at the Institute) sent her a letter asking her to lead an expedition of nurses. Florence had already written to Elizabeth Herbert to ask the same thing!

On arrival in Scutari, Turkey, Florence found a hospital built over a sewer, swimming in filth. Rats were everywhere and soldiers were crawling with lice. Beds crammed too close together, along with unsanitary practices like using the same cloth to wipe down several soldiers, ensured that the hospital was as likely to kill an injured soldier as cure him. Amputations in the hospital had a far higher mortality rate than those carried out on the battlefield. Germ theory was still to come, but through her own observations Florence was able to make useful recommendations. Sheets and clothing were boiled, ventilation was introduced, toilet buckets were emptied promptly, clean cloths were used for each patient, and nurses were required to wash their hands frequently. Florence also paid for more nutritious food for the patients out of her own pocket.

Florence took a keen interest in the soldiers’ mental and spiritual health. She arranged for them to send letters and wages home, and organised activities for them that didn’t involve alcohol. She comforted those for whom nothing could be done, writing to their families after their deaths. And, of course, she patrolled the hospital at night to check on the patients and offer a kind word to those who were suffering.

Returning soldiers started to spread the legend of the ‘Lady with the Lamp’, and it captured the public imagination. But she also dealt with the hostility of army doctors who resented being ordered around, and she contracted an illness that would plague her for decades – probably brucellosis from infected milk. By the time she returned to Britain she was so ill she thought she would soon die. But that was not to be and, instead, Florence succumbed to the cult of celebrity.

Partly stoked by her doting sister, Parthenope, ‘Nightingale fever’ seized the country. Prints of her portrait were being sold as keepsakes, and poems were being composed about her. Florence did not relish her new-found fame; she returned to Britain anonymously as ‘Miss Smith’, but she was canny enough to know that it could be enormously useful. Her ambivalent relationship with celebrity would continue throughout her life. 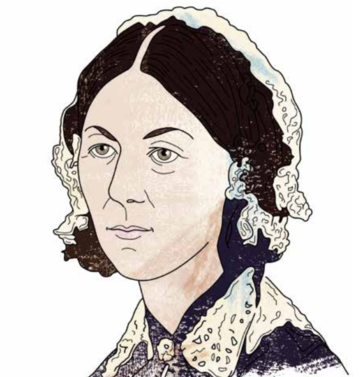 Although Florence stopped attending church in her early 30s, doing God’s will was still her deepest motivation. Her family had been Unitarian (a sect that denies the Trinity) before they switched to the Church of England, and Florence’s religious views were shaped by this heterodox background. She was influenced by rationalism, denying the possibility of miracles and rejecting the idea of hell, but her rationalism also pushed her towards action. Rather than seeking a mystical experience, she believed that the call of God on her life was to sacrifice whatever was necessary in order to do good. So despite her ruined health, she continued her work.

On her return from the Crimea, Florence immediately pushed for an investigation into sanitary conditions during the war. She subjected the data she had collected to close analysis. What she found disturbed her. The Barrack Hospital, which she had personally supervised, had the highest hospital death rate. This was almost certainly due to its location on top of a sewer, which was not her decision, but she was determined that lessons should be learned. When the government tried to suppress the findings of the Royal Commission, she threatened to go public, forcing their hand. Florence used her contacts to lobby for a second Royal Commission, this time into the sanitary situation in India after a mutiny there in 1858. She wrote to many officers in the field to gather statistics, and her recommendations transformed conditions for Indian soldiers and their families. She had a growing sense that the British were not managing India well, and that the Indian people should be allowed to handle their affairs for themselves. In later life, she became an activist for Indian independence.

While never seeking glory for herself, Florence was ruthless in using her fame and her social connections to advance her causes, even having sympathetic politicians appointed to influential positions.

Later in life she used a public fund that had been set up in her honour to establish the first professional training school for nurses, attached to St Thomas’ Hospital. She spearheaded the model for the classic Victorian hospital building, with separate wards and plenty of windows. She also wrote a number of books, including her hugely popular Notes on Nursing.

Once germ theory became established, she promoted the use of antiseptic techniques during surgery. And all of this she achieved while she was confined to her apartments by ill health. Florence eventually recovered from the effects of brucellosis and was able to make a few rare public appearances in the 1880s, but soon old age began to take its toll. She gradually went blind, and in her final years her mind started to wander.

She became the first woman to receive the Medal of Honour in 1907. In 1910 she died at the age of 90, having lived to see the success of many of her reforms.

This article was first published in a print issue of Premier Christianity. Subscribe today to enjoy the print editions and full online access for only £4.95/month