Karen Murdarasi isn’t sure there’s much historical accuracy in the myths and legends that surround the origins of St Valentine’s Day. But that doesn’t mean Christians shouldn’t take the opportunity it presents to love those around them well. 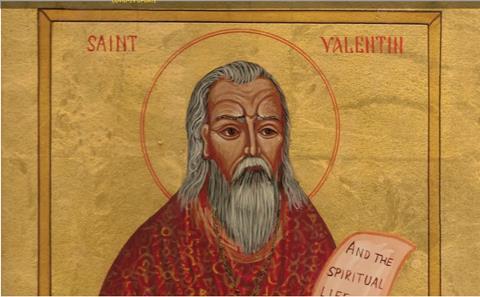 If you haven’t already booked a table for two for tonight – sorry, it’s too late now. Restaurants with eyewatering ‘special’ menus will be crammed with couples, and the restaurateurs will perhaps breathe a prayer of thanks to St Valentine. Greetings card companies and florists have good reason to be grateful to this saint, too. But who was St Valentine and what has he got to do with romance?

There are lots of saints called Valentine, but only two of them seem to fit the bill. They were both churchmen (one was a priest, the other a bishop), both were martyred in Italy around AD 269, and both are remembered on 14 February (presumably they day they died). In fact, they were very probably the same man, especially as their stories are so similar. In each case, Valentine healed a child, the child’s family became Christians, and then Valentine was beheaded under Claudius II Gothicus. So, we can be pretty confident that Valentine was a Christian clergyman martyred by the Roman Empire, like so many others. What is not clear is what that has to do with hearts and flowers.

Some people connect Valentine’s Day with the Lupercalia, a Roman festival of purification and fertility held on 15 February. Its origins are ancient and obscure but, each year, half-naked young men would run through Rome hitting bystanders with strips of hide from a freshly sacrificed goat. Women were keen to be hit with the strips of bloody skin because that was supposed to bring fertility and easy childbirth. It had nothing whatever to do with love or romance. One historian in the eighteenth Century claimed that Roman girls and boys put their names into a sort of ‘love lottery’ at the Lupercalia and were paired up for a year, but that detail was borrowed (to put it nicely) from medieval British traditions; it never happened in Ancient Rome.

The time lag between the end of the Lupercalia and the beginning of the Feast of St Valentine also rules out any connection. The Roman festival was banned in 494 by Pope Gelasius, but the first mention of the saint’s day being celebrated comes from a document written 200 years later, and the association with romantic love didn’t begin until the Middle Ages.

Could the romantic element come from the man himself? There are certainly some romantic legends connected with Valentine. One says that when Claudius banned young men from marrying, Valentine continued to perform wedding ceremonies in defiance of the edict. Another says that he fell in love with the jailer’s daughter while he was awaiting execution, and when he went to his death, he left her a note from “your Valentine”. It would be nice to think that St Valentine’s Day, tacky thought it now is, still honours the actions of a Christian saint. Unfortunately, neither of these tales has any historical basis. Claudius Gothicus did not ban marriage, and we have no idea what Valentine did while he awaited execution. These legends probably came about after St Valentine’s Day was already associated with romance, to explain this confusing connection.

The most likely link between Valentine and romance seems to be, strangely, birds.

In the Middle Ages, birds were thought to select their mates in the middle of February, which is when St Valentine’s Day happens to fall. Chaucer mentioned this in his poem from about 1381, ‘The Parliament of Fowles’:

“For this was on Saint Valentine’s day, When every fowl comes there his mate to take”

This belief made February 14 seem like a good time for humans to try pairing up, too. Throughout the Middle Ages, a tradition emerged of exchanging love tokens on St Valentine’s Day, until St Valentine’s name became permanently linked with declarations of love. If Valentine had been executed in another month, perhaps we would be sending Auxentius’ or Maro’s cards instead.

The connection between the celebration of romantic love and a Christian martyr is entirely coincidental – but that doesn’t necessarily mean we should ‘bah humbug’ the whole thing. If you have a significant other, today is the perfect reminder to reaffirm your commitment to one another. And romantic love is not the only kind of love. If you know someone who is lonely, struggling or just finding it hard being single on Valentine’s Day, it’s also a great time to reach out, let them know you’re thinking of them and demonstrate God’s love through friendship. Surely even Pope Gelasius would approve of that.