It’s almost a year since Prime Minister Boris Johnson's shock announcement that all entertainment venues must immediately close their doors in order to prevent the spread of coronavirus. Many months on, some music venues, art galleries and theatres are still yet to re-open. The financial burden caused by the lockdowns has been keenly felt and plenty of West End stars – some of them my own friends and family – are now stacking shelves in their local supermarkets to make ends meet.

The London-based Rachelle Ann Go was one of the many whose job security and livelihood was snatched away by Covid-19. The 34-year-old had previously starred in the West End and Broadway’s biggest shows including Les Misérables, Miss Saigon and the perpetually sold-out Hamilton. I caught up with her over Zoom in the middle of yet another UK lockdown, and while she shared some positive experiences of what she had learned through the pandemic, she was also beautifully honest about the confusion and pain it had evidently brought to so many.

The star grew up in a nominally Catholic family in the Philippines. Her father taught her how to sing and play musical instruments, clearly inspired by how his daughter had somehow managed to hum along in tune to a song on the radio when she was just eight months old. From a very young age, she was invited to sing in front of relatives, with her big break coming aged eleven when she won the televised talent show Search for a Star and became an overnight sensation in the Philippines. Since then she has released at least seven solo albums – she can’t remember the exact number but says some of them have achieved gold or platinum status. She also made an appearance in the music video for the 2015 Disney blockbuster Cinderella.

But her childhood was tough – she was bullied and was painfully shy. During her first competition when she was just nine years old, she overheard people saying that she would never win because she wasn’t good enough. She proved her critics wrong, but the words obviously cut her deeply. To have a contract, management and a recording deal by the time she was a teenager was a dream come true. But looking back, Ann Go tells me she didn’t know how to handle it. She was left feeling lost.

Ann Go’s devout Christian faith has been of paramount importance when it comes to navigating the ups and downs of a career in the world of entertainment. Her social media presence is prolific. She has half a million followers on Instagram, and more than 3.3 million on Twitter. Interspersed with beautiful posts about the glitz and glam of showbiz life, Ann Go powerfully and openly shares her faith. During our interview, I was moved by her unshakable certainty that, no matter what, her heavenly Father will not let her go.

What’s it like being a Christian in musical theatre?

For the first two years it was tough, because I was in a dark place. But then, towards the end, there was that boldness, that urgency for me to share something. I believe that God will always open doors for us to share something. I tell my friends and husband: “Every time there’s that opportunity, grab it,” because these people I meet or encounter, you never know when you’re going to work with them or see them again. I love building relationships with people and that's what’s amazing in the theatre world. You basically become a family. You're very vulnerable when you act together. Everyone is so open and that's really an advantage for me to speak the truth with them.

People ask whether there are certain shows I wouldn’t be in because of my faith, but I remember our pastor in the Philippines saying: “Sometimes God will put you in dark places for you to shine for him.” God will put us somewhere, even in the darkest space – that’s actually the best place to go for you to share him.

What have been your career highlights so far?

Hamilton was so good, but it was so tough. I think besides the show itself, the highlight was bringing Jesus. There were a few other Christians and we planned this ‘circle of love’, which is actually a prayer circle. I said: “Shall we invite everyone?”, so we did. Everyone joined. Everyone was open, which was amazing because there were people from different countries and cultures. People would say thank you for whatever they were grateful for. One time this guy was beside me – he never wanted to say anything – but that night, for some reason, he started praying in Jesus’ name. And I thought God is really moving. That really made my heart jump. 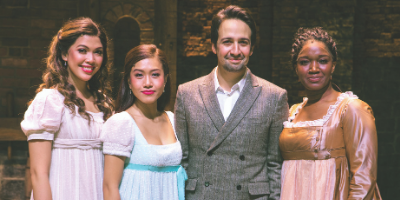 The ‘circle of love’ started when we opened the show, and when I left, they were still doing it. It really makes such a difference. To unite everyone, it felt like a family. For me, that’s the highlight – sharing the gospel, sharing the truth.

What was your first experience of God?

Everyone in the Philippines knows of Jesus. I read the Bible, but I didn't really have a relationship. Every night I would pray and say: “Goodnight, Papa Jesus.” In 2005 someone invited me to church. I had all these questions, and this person was like: “Just try it out. You know there’s a band too?” I didn’t really understand why there was a band – why was it like a concert? But I went and I will not forget that moment. I was just crying. The message really hit me and I felt peace, including at home. After I left that Sunday, I wanted to go back. I felt my spirit was so filled with something that I couldn’t understand. Then this person invited me to a Bible study. It wasn’t a smooth journey, of course, and it took me a long time to really go deeper. 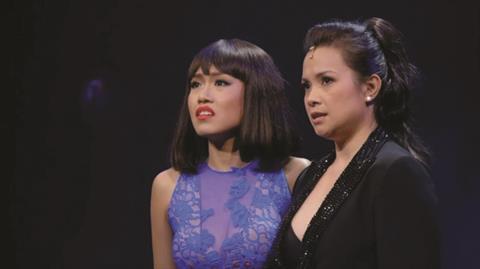 I was so scared to move hereby myself. Every time I’d travelled previously, someone would go with me. I wasn’t really sure if I should do it. Then I just started praying. I asked God to reveal what he wanted me to do and where he wanted me to go. I was reading the Bible where God says to Joshua: “Do not be discouraged, for [I] will be with you wherever you go” (Joshua 1:9). When I read that, I knew I shouldn’t be scared. Philippines will always be my home, but if I have Jesus with me, it doesn’t matter where I am. So when I read that verse I said: “This is my answer. I’m going to say yes to doing Miss Saigon in London.”

When I moved here, I was excited because I thought: There'll be no distractions, it will just be me and God, it will be amazing. But it was so hard. I got ill – my body was adjusting to the cold! Rehearsals were so busy that I forgot and kind of pushed God away. I realised I needed community and so I started going to church, but I didn’t really plug in. That’s what happened to me for a year or two. I went through depression, which was really, really tough. But God didn’t leave me. He was there waiting for me. He kept pursuing me. After three years in London I went to New York, which is where I met people at church who really helped me grow spiritually I was only on Broadway for eight months, but I really grew in that time. That's where I met my husband as well, so everything just fell into place. It's really not easy to be away and be by yourself. I think it’s so important to love yourself and find people who will surround you and help you grow.

Did those difficult times affect your relationship with God?

I never questioned his existence, which is good. With the weakness, during those dark moments, I felt his presence even more. It was so tangible. One time, I was in my flat and I opened my Bible for the first time in ages. I just started crying. I felt so bad. I felt like I was running so far away from him. I was just sobbing because he was saying: “All this time, I’m just here.” It was such a beautiful moment – that whatever we do, whatever we feel, even if we’re pushing him away, he will not go anywhere. From that point, I wanted to get to know him more and more, and then God started to bless me with people to help me grow. And I’m so grateful for that.

The year 2020 was so tough for a lot of people. I want to encourage people to press on and just keep believing that this season is tough, but it has a purpose. I’ve really used this time to reconnect with my faith, my family, everyone around me. I've been so busy all these years focusing on my career, but in this time we can really focus on what’s important, which is our life that is given to us, and our faith. Find your purpose at this time, focusing on bigger things. I know a lot of people are losing their jobs. I don’t have a job. It’s really tough, but just focus on the good things rather than the bad things. It's easy to say, but actually, if you magnify his glory and goodness, you'll feel his peace and joy.

Do you get nervous before going on stage?

Once before an opening show, I was so nervous. And someone said: “Think about yourself when you were a kid and how much you wanted this.” So I always go back to: why am I here? This is my dream! You wanted this and people are rooting for you. Just be yourself. And enjoy every single moment. 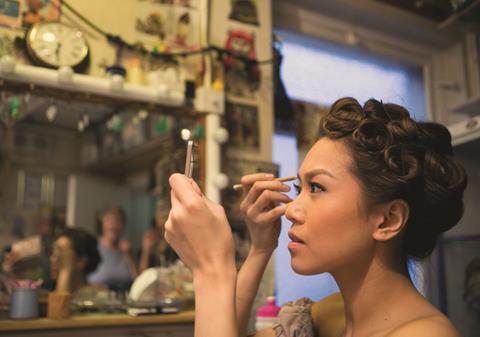 Getting ready backstage prior to the Les Misérables 30th anniversary gala performance at the Queen’s Theatre, London, in aid of Save The Children

I use that time before a performance to reflect and remind myself that my purpose is to actually share my gift. I see kids in the audience who look like me, Asians, and know that when I meet them after the show, they will hug me and say: “I look like you. One day I can be like you.”

You’re expecting a baby in March. Is it difficult being pregnant in your industry?

It’s such a perfect time for us to build a family while I’m not working and can just enjoy the season, but even just talking to you I’m already running out of breath! I was supposed to do a show for a few weeks – a socially distanced staged concert version of Les Misérables, but I had to say no. I felt like it would be tough for me to sing and belt out. I did a bit of singing for my church in my second trimester, but I think singing during my third trimester might be hard for me. I think I’ll just rest for now and take it easy. Every time I sing the baby kicks!

I probably need a year or more off. Previously, I couldn’t have imagined leaving my job. But now, my priorities are different.

Has being pregnant changed the way you think about God?

Definitely. My husband and I are so surprised. It’s amazing how there's another human being growing inside of me. How is that possible? How can you think that there is no God? I can’t put it into words, but it’s just amazing that what we prayed for is finally here. And it’s funny because the moment we prayed for a baby, it happened just like that, so be careful what you pray for!