The Christian blogosphere is in mourning this evening following the news that one of its most well-known voices has gone to glory.

Rachel Held Evans, 37 passed away in the early hours of Saturday morning (US time) after a short illness.

Evans had been hospitalised following a severe allergic reaction to antibiotics a number of weeks ago. After she was placed in a medically induced coma, her many fans closely followed health updates and used the hashtag #PrayForRHE to share their prayers. Nearly 3,000 supporters also donated towards her medical costs, with the total amount raised currently standing at $120,000.

Following the news of her death, husband Dan Evans wrote: “This entire experience is surreal. I keep hoping it’s a nightmare from which I’ll awake. I feel like I’m telling someone else’s story."

"Rachel’s presence in this world was a gift to us all and her work will long survive her."

Best known for her News York Times bestselling book A Year of Biblical Womanhood, Evans was a prominent author, speaker and blogger based in Tennessee. She first rose to prominence through her blog and Twitter account, where she would often comment on contentious subjects related to faith and politics, as well as critiquing the American evangelical sub-culture.

She was a regular commentator on issues relating to LGBT inclusion, feminism and abortion. Her views on these and other subjects regularly put her at odds with many in the evangelical mainstream. Yet, as was demonstrated by her huge social media following, her opinions and ideas resonated with many Christians who had fallen out of love with more conservative evangelical beliefs.

I had the privilege of interviewing Rachel on a number of occasions, most recently for the Premier Christianity podcast, where we spoke about her most recent book, Inspired: Slaying Giants, Walking on Water, and Loving the Bible Again. The Washington Post once described her as "the most polarising woman in evangelicalism", and she was good-natured enough to laugh and joke about that description when I raised it with her during that chat. I always enjoyed our Skype conversations, even though there was often plenty we disagreed on. Her perspective was unique, thought provoking and often challenging in all the right ways.

She will be remembered for asking questions which others tried to ignore. For speaking boldly and passionately. For championing individuals and groups of people whom she felt had been marginalised. And perhaps most importantly of all, for creating an online community where "doubt" wasn't a dirty word. Her work was lauded by the many evangelicals who experience theological deconstruction in one form or another. (And it wouldn't surprise me if some in the American evangelical establishment were actually envious of her following, after all, it was substantially larger than that of many megachurch pastors!)

Over the past decade there have been a flurry of memoirs written by American post-evangelical millennials. Such authors tend to criticise the subculture they were raised in. And if one were to follow these voices exclusively, it could easily make you overly cynical. What was so refreshing about Evans' work wasn't just that it predated a lot of the exvangelical angst, but that she clung onto the best of the childhood faith she was raised with. There's no doubt she was regularly frustrated by the actions of fellow Christian leaders, but she always held onto her faith in spite of it.

Her best known book was 2012's A Year of Biblical Womanhood in which she committed to following all of the Bible’s many instructions for women. She took this to hilarious extremes. One of my favourite stories from the book involves Proverbs 31:23 which states a virtuous woman's husband is "respected at the city gate". In order to follow that commandment, Evans did this: 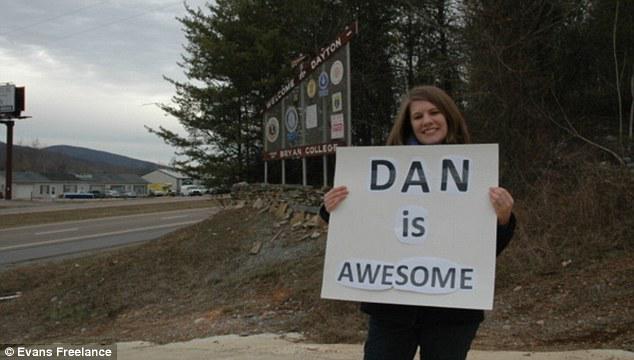 In an interview with Premier Christianity around the time of the book's release, Evans explained: "Coming out of the year, I feel more passionate about advocating for gender equality in the Church, and I feel like I understand myself better as a woman. And I truly, truly feel like my love for the Bible only increased after this, which I wasn’t entirely sure would happen, so it’s been a great experience."

By 2014, and after many debates and arguments with fellow Christians online, Evans had dropped the "evangelical" label. "I’d just grown weary of fighting for a label that no longer fit," she told Religion News Service.

She went on to write about her subsequent journey away from church and what brought her back in Searching for Sunday: "We long for our churches to be safe places to doubt, to ask questions, and to tell the truth, even when it’s uncomfortable. We want to talk about the tough stuff—biblical interpretation, religious pluralism, sexuality, racial reconciliation, and social justice—but without predetermined conclusions or simplistic answers. We want to bring our whole selves through the church doors, without leaving our hearts and minds behind, without wearing a mask."

Rachel Held Evans wrestled with doubt. She had many questions about God, the Bible and theology. But she gave those who were struggling and grappling with their faith reasons to hold on, to persevere, to still believe, despite everything, that there really is a God and he has made himself known in the person of Jesus Christ.

She was a deep thinker, and her life's journey was one of discovering many of the simplistic answers she'd been given as a child, didn't quite cut it. Not only is she now at peace with her heavenly father. But I've a feeling she's also enjoying have all of her many questions answered. Once and for all.

Grieved to hear Rachel Held Evans has died. Believing in hope that the freedom she gave so many to doubt yet believe is one she requires no longer, her greatest hopes realized. Sharing this photo as it's the happiest I have of her, and I know how much the day meant to her. pic.twitter.com/tbdw4k6sUU

As many of you know now @rachelheldevans died today. Kathy and I began praying for her as soon as we heard about her illness. We grieve so much for her family who has lost wife and mother. https://t.co/VZfNiymxmq

So sad to hear about the death of @rachelheldevans I loved the way she fearlessly asked questions, challenged hypocrisy and championed women. Prayers for her husband and young children at this difficult time.

At a time when many were looking for reasons to leave, RHE was carving out paths so people could find their way to the church, creating belonging for those who never experienced it. She will be greatly missed, but those paths, now well-worn, remain.https://t.co/wVcFV23YTW