Could a post-Brexit crash turn us back to God? These prophetic paintings will make you wonder

What will it take for Britain to turn wholeheartedly to Jesus? Will it be through a Brexit-ushered economic winter?

In 2002 I was settling in to listen to Jesus more clearly than I had thought possible. The teaching of Mark Virkler (4 Keys to Hearing God’s Voice) had enabled me to tune in to Jesus far more than before. Along with saying much to encourage, comfort and strengthen, I also felt God warn me: "Winter is coming to your land, a severe but not crippling winter, a winter in which you will need to turn to me more and more. Tell this to people. Keep telling it to those who will listen."

Winter is a time when nothing grows and much dies back or is cut back. Winter is a long, dark season. I believed God was saying the British economy will have a long dark period of no growth and much dying back. I thought he said that the dying back could be by as much as a half and that this winter would be marked by two Japanese car manufacturers leaving Britain. (Back then, the prospect of two Japanese car manufacturers leaving Britain seemed highly unlikely. It isn't anymore. Last month, Honda announced the closure of their Swindon plant.)

Feeling a little foolish, I passed what I thought God was saying on to a City of London Investment Manager. He surprised me by accepting my message. He explained that financiers then were considering how to advise people through a sustained recession. "Here, in the City, we don’t use the name 'Winter', we talk of an 'Ice Age'".

This prophetic word from God might sound dark, but it's important to say I also believed he was saying that this severe winter would be followed by an unprecedented turning to God and a bright spring.

Last year I found my understanding of Jesus’ message for this country echoed by renowned painter and Christian, Peter Howson.

This is the first of five large canvases painted in 2018, recently shown at the Flowers Gallery in Hoxton, East London:

The woman being pushed to the cliff by the burly ‘patriots’ is Britannia. As a naturalised Scot, Howson fears that Brexit could break up the United Kingdom, as his countrymen will be determined to again be part of Europe.

Proud independence is driving us to the cliff. False history says "During the Second World War we stood alone and it was our finest hour. We must now stand alone once more, free from the Bureaucrats of Brussels." True history says "We needed our Allies, our Empire / Commonwealth partners. We needed the Russians and the Americans. We must stand together or we sink."

Proud independence finds it easier to blame the Bureaucrats of Brussels than to recognise our own mistakes. We have become lazy and rushed away from the foundations of Christian morality on which our community life was based. We have sought fun and a good laugh above all else. We have served Mammon, prioritised servicing the rich through the City of London. The damage to our nation has been self-inflicted. We need to be saved not from the Bureaucrats of Brussels, but from our own sins.

What happens after the cliff-fall? Howson's next paintings of 2018 were scenes of Britain fallen into a hellish existence:

Here is the grim essence of the reality of Britain degraded by, wallowing in, its sins.

Howson's faith asserts that, even in this headlong embrace of sin, Britain is not abandoned by God. Jesus remains with us (although the cross is mostly ignored).

What after the degradation? Peter H continued to paint:

This man is the leading Patriot. His Union Jack drape has gone. The substantial bridge over the water has been demolished. He is not rushing on his feet but crawling on his belly. But he knows he is down and he is looking up for help. The sky is beautifully mottled with touches of hopeful colour. He is like an addict coming to his senses and seeking the help of a higher power.

In the 12-step programme devised by Christians, which has become the basis of Alcoholics Anonymous, the third step is "Make a decision to turn our will and our lives over to the care of God."

In 2001 Howson painted the Third Step:

He also painted The Patriot Brit taking the Third Step amidst the general degradation: 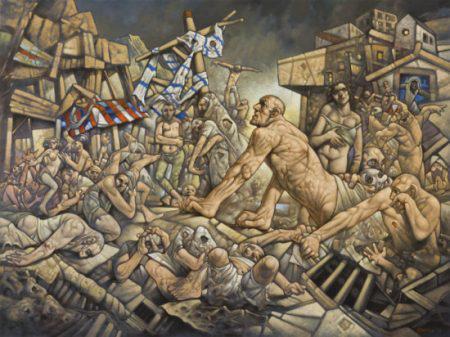 The First Step is to recognise that we are powerless over our addiction, and that our lives have become unmanageable. The Patriot Brit has, eventually, recognised his addiction to proud independence, fun and mammon. The second step is to come to believe that a power greater than ourselves can restore us to sanity. The Patriot Brit has come to believe or begun to believe. Now Howson paints him turning his will over to the care of God.

After the Brexit cliff-fall, is a wallowing degradation. After the degradation is a turning to God. Howson sees and shows this to come. Salvation in the end? The light of a forgiving dawn after the sin-engendered darkness? Spring after Winter?

Roger Harper has worked for over 30 years in Anglican ministry. He is a Prison Chaplain and blogs at rogerharper.wordpress.com. To view more of Peter Howson's work and purchase his canvases or prints visit peterhowson.co.uk