Ever since the government closed church buildings, the role of a church leader has inevitably changed. Finding himself with a little more time on his hands, Pastor Matthew Murray from Renew Church in Uttoxeter decided to take on a second job in order to raise money for his local foodbank. Pastor Murray is now a delivery driver for his local takeaway, Sergeant Peppers. He told Premier Christianity the idea “struck him like a bolt from heaven”. Not only is he using the funds for good, the opportunity has also allowed him to stay connected with his congregation. “People in our church will call up, make an order and request for me to deliver it. I get to see them for a few minutes and say, ‘I’m praying for you guys, how are you doing?’

Those hospitalised with coronavirus are dealt a double blow as they are left with no access to loved ones during their suffering due to strict social distancing measures. Many hospital chaplains are filling the gap. Rev David Southall, who works with Worcestershire Acute NHS Trust, has been taking written messages from family members onto the wards. Speaking to Premier Christianity about a recent encounter, he said: “I went up, put on a mask, gown, gloves and everything else you need to wear at this time and read out to him the emails which were sent to me by the family. There was much weeping on his part. He was relieved and grateful to know they were thinking of him.

With all of the major Christian conferences and festivals, including Big Church Day Out, New Wine and Greenbelt, being forced to postpone their events until 2021, many are worried about their long-term future (one festival organiser told Premier Christianity this year’s cancellation is costing them more than £1.5m). But postponing physical gatherings need not prevent digital ones from springing up in the meantime. Thousands of Spring Harvest attendees would have gathered at three locations over Easter; instead, tens of thousands joined in hearing from speakers via YouTube. “Never has there been a more appropriate time for us to gather together as a community to worship, learn, laugh and pray together,” organisers said.

How do you respond when you have so many people in your community needing to get to hospital appointments, but you need to keep to social distancing rules? Step forward the Ashburton Community Covid Response team and the ‘coronavirus cab’. The group from Devon, which includes Rt Rev Mark Rylands, an assistant bishop in the Diocese of Exeter, purchased an old black cab for £500 and is now using it to ferry elderly and vulnerable patients to and from hospital visits completely free of charge. It is thought the glass partition between driver and passenger will mean no infection can be passed on. Local people have been asked to come up with a name for the cab. As well as the inevitable ‘Cabby McCab Face’, a more serious suggestion of ‘Florence’ has been floated (after Florence Nightingale).

The story of Northern Ireland pastor Mark McClurg recently went viral on social media. Having caught coronavirus, the leader of Newtownards Elim church was taken to an Intensive Care Unit as his health began to deteriorate. “It hought this was it, I thought I was going to die,” he told the BBC. It was there that he heard the audible voice of God telling him “you are more than a conqueror”. McLurg told Premier Christianity that he’d never experienced anything like it in his lifetime, but believes his time in hospital has led to great opportunity: “Within the space of a couple of days, everybody knew about what happened to my life, simply because the Lord wants us Christians to spread hope, the good news and the gospel of Jesus Christ.”

As the country began to go into quarantine, Angela Barry was determined to ensure that the older people in her community didn’t feel alone. Along with her husband and three children, she set up a weekly free fruit and veg stall outside her house in Breightmet, Bolton, as well as delivering bags of fresh produce to those who need it most. “We were ordering some fruit and veg for ourselves and just ordered extra to put out a stall,” Angela told Premier Christianity. “We put it out for everyone to come and get what they needed.” Sons Joshua, 9, Ben, 7 and Isaac, 4 have been running the stall and the family says it’s created many opportunities for new relationships. Angela said, “It’s a brilliant chance for us to really show what Church is in our local community.” 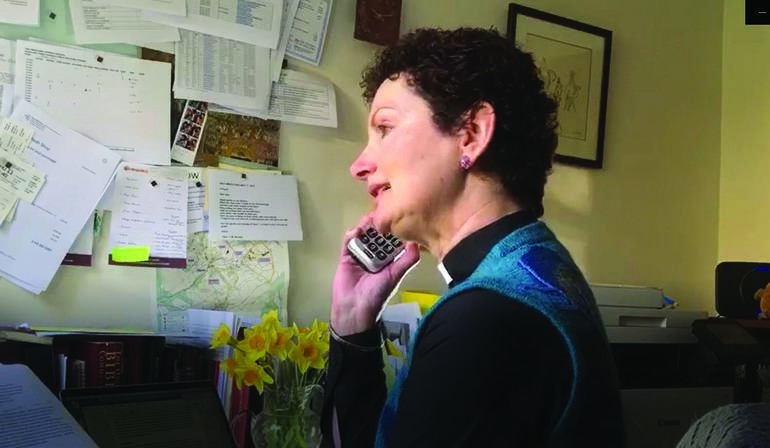 While it’s right that we celebrate how many churches have been able to move their services online, some people still don’t have computer – or even smartphone – access. Rev Ruth Frampton was determined not to lose connection with her parishes and instead launched a church service via telephone. Using a conference call facility she’s been joined by over 80 mostly elderly members of her network of churches. The 30-minute services, which include worship, readings and prayers, have received very positive feedback, with some even joining in from hospital.