6 lies our worship songs tell us

You are what you eat. That’s what they say. So what would you be after nothing but a diet of jelly, custard and the odd sandwich each week? And why eat like that, when there are so many healthier and tastier options? Yet that is how many churches approach their Sunday diet of worship music. Light and often insubstantial, it is unlikely to create healthy Christians.

More than individual songs, it is the overall impact of our song content that has me worried. I doubt that our songwriters try to deceive us, but taken in bulk, the songs we sing week by week create some startling impressions – and we seem unaware of the following damaging lies that we are being told by this culture:

1. The physical world does not matter

Surveying the swathes of songs regularly used in churches, you would think that ordinary daily life means nothing.

Three songs into a block of praise music, we may be thinking about last night’s film or the dress sense of the person in front. The songs have been full of words such as ‘holy’ and ‘glory’. Yes, God is transcendent, but if we don’t give our minds tangible content to grab hold of, our thoughts will wander.

If we don’t give our minds tangible content to grab hold of, our thoughts will wander

Where are the lyrics relating faith to family life, shopping, work, character or entertainment? If the main human drivers are money, sex and power, why have we written so few songs about them? Or do we think that God’s not interested in such things?

Ordinary life was precious enough for God to invent it, declare it good and live it for over 30 years. The early Church heresy of Gnosticism tried to escape the reality of Jesus’ incarnate form, because the heretics felt that earthly matter was too debased for God to touch.

Tom Wright says, “Heresy happens when the Church forgets a bit of its teaching; somebody else picks that up and makes a whole system out of it.” He warns that our culture’s tendency to treat our emotions as if they are the core of people’s reality “reflects a kind of Gnosticism (‘finding out who I really am’) as opposed to Christianity (receiving the re-creation of one’s self as divine gift through dying and rising with the Messiah); and that this focus on ‘who I really am’ – in an emotional sense in particular – finds its way into some Christian songs.”

While our worship songs are not individually Gnostic, they get very close by avoiding tangible terms in their lyrics, leaving the impression that the everyday is too banal for God. This lie disconnects our faith from our real lives – and that’s dangerous.

Standing at the front, looking at the congregation, it was hard to miss. While everyone else was singing, Ben stood silently. He visits occasionally (his wife is a church member) but this time he looked uncomfortable, and it struck me how hard it can be for visitors to sing many of our lyrics – at least if they want to be honest in what they sing.

If visitors find themselves singing off-putting or incomprehensible words, they may leave feeling awkward and thinking that faith is for an eccentric club. It could undo any welcome or thoughtful input from the rest of the service.

Often the ‘Jesus is my boyfriend’ songs are the culprits. Men – already underrepresented in the Church by some 30 per cent, and who very rarely have to sing anywhere else in life – must sing about loving a male figure, traditionally shown wearing what looks like a dress. It’s hardly likely to get them queuing up to tweet their experience afterwards – at least, not in a helpful way.

Sometimes (as with ‘Days of Elijah’) we encode the whole song, so that it only makes sense to the well-versed insider, but is completely impenetrable to visitors. This lie alienates enquirers and blows up their bridges to faith. 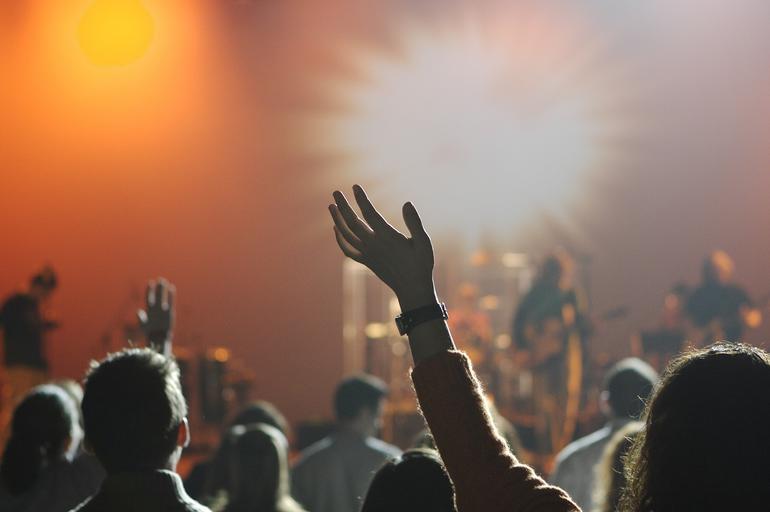 3. It’s better to put up a false face than to be honest

Another discomfiting song-type is where singers are asked to promise “I surrender all” – a vow that few Christians can sing with honesty, let alone visitors.

The glib phrase barely begins to convey the experience of handing everything to God. Its simplicity makes Christians feel alone when struggling to relinquish a resistant area of life, and hides the fact that God is with us in the wrestling. Crucially, it makes the whole process of singing to God feel like a ritualistic charade.

Maybe it is splitting hairs, but I feel more honest singing, “I want to” than “I will” when I know that I will fail pretty soon – after all, isn’t that why we have confession every week? This lie undermines confession, honesty and our integrity, creating the impression that pretence is ok.

4. Life with God is easy

A friend once explained how worship songs are written: there is a small list of permitted phrases. You cut them up, throw them into the air, see how they come down and join them together, sometimes with rhymes.

Outside the Church, songwriters grapple with life’s complexities and people relate to such honest, grounded songs. Christians who want to be effective for God in what Delirious? brilliantly called “mezzamorphis” (becoming like Christ in the tension between earth and heaven) have an even greater call on such material. There is so much in life to explore, yet worship songwriters often refuse – or are too unskilled – to don their miners’ lamps and enter its depths. This lie gives unhelpful expectations and encourages platitudes.

We should not be surprised that current worship songs have little individuality. They come from a writing-by-numbers industry.

Production lines thrive on regular, predictable output. McDonald’s customers expect exactly the same quarter pounder, whether they are in Maidenhead or Malaysia.

We are children of the dynamic God who created everything from star clusters to amoeba, including murmurations, rainforests and blobfish (Google it). He did not paint the walls of the universe beige.

Creative, talented Christian songwriters do exist. Irishman Brian Houston is one. Equally adept at passionate gospel songs and singersongwriter material that grabs the heart, all-comers can relate to his work. But he has been shunned by literalist Christian record companies, who struggle to pigeonhole him.

After losing his luggage, so wearing three day-old clothes, and trying to kick off worship at one event, despite the projector blowing a fuse as soon as he hit his first chord, he found himself trying to lead over 2,000 people in worship, when they didn’t know his songs.

Houston recalls, “I was opening for a guy I’d never heard of called Chris Tomlin. He was tipped to be very big indeed and everyone from the Christian music industry was there.

“As it turned out, the people in the room had come to worship. All I had to do was start them off and for the next hour they participated in a very intimate time of worship. The industry didn’t like it.

“The next night I got to play with some amazing session players in an impromptu worship jam session. The prophetic inspiration flowed and it was one of the best times of worship I’d ever experienced. I could barely sleep that night from the massive adrenalin rush. I felt more alive than ever!

“The industry feedback I got was ‘we can’t sell this’. After three years of trying I eventually went back to playing bars.”

The role of the artist is to complement, not replace, the preacher. It is to make us feel, as well as think.

Some worship songwriters seem terrified of creating images not already in scripture. But surely, to be scriptural is to be creative. The Gospels flow with accounts of Jesus – already furious with religious people for making God seem unapproachable – building his message with everyday pictures.

He used universally understood images such as family relationships, light, bread and water. But he also used pictures that were of his time and place, such as festival shelters, fig trees, banquet etiquette, and a mugging on a notoriously dangerous local road. When a songwriter today adopts images such as shepherds or oil lamps, they become pointless. Instead of illustrating something in a fresh way that makes the point clearer, the images themselves need explanation. Ah, we’re back to ‘Days of Elijah’.

This lie embarrasses the Church and denies God’s character. It also drives Christian artists out of the Church.

6. We are all little islands

As a random experiment, I searched the top worship lyrics and had to wait until the twelfth attempt to get a ‘We’ song. But the Church is a body, a congregation, a movement. We are not a collection of individuals. We should be like a honeycomb, where taking out one cell affects six others.

This lie undermines our identity and purpose, making us seem like the individualistic culture around us. Where do we go from here? Our worship culture has grown out of whack by writers being lazy, record companies being predictable, worship leaders choosing an imbalance of songs, and individuals missing the wealth of music available. Rebalancing our worship will depend on all these factors being adjusted.

Songwriters: What issues are Christians intellectually and devotionally wrestling with? For which experiences do they need your words? What virtues does God want to grow in us? Watch, listen, feel, pray – and then write. Look for the gaps. There’s no immediate need for more songs about God’s glory. Are you the one to write about grief, confession, loving the unlovely, welcoming strangers, shopping christianly or struggling with doubt? Go deep, not wide. Don’t just insert a buzzword like ‘justice’ and think you’re done. How does injustice impact people? Tell the story. What resolution should we pray for? Use the whole song to explore one subject. Write about Jesus on earth, who lived an actual life and had a real job. Objective songs help us to connect our faith and life.

Record companies: Consider a year of releasing dangerously! Ban clichés and allow your good songwriters to do the above and touch people’s everyday experience. It will freshen your repertoire, stop your existing lyrics being devalued by repetition – and you may even get Christian music-lovers to take you seriously.

Worship leaders: Consider it part of your remit to find appropriate songs outside of the usual generated fare. Try to look beyond the songs coming out of the major Christian events, conferences and ‘big name’ worship leaders. If you can’t find new songs, write your own lyrics to an existing tune – or find writers in your congregation.

Individuals: For personal inspiration and feeding, seek out independent reviewers who share your taste. They are hard to come by, but try my colleagues at the music section of tollbooth.org for starters. Talk with your worship leaders about what does and doesn’t work for you, but always constructively and with appreciation for their dedicated service at a job where they can never please everyone!