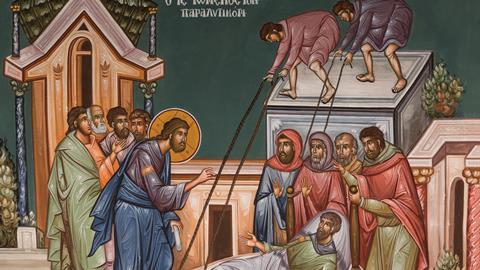 The kind of faith that Jesus loves

Christians have traditionally understood faith to mean trust in God. But there's another vital aspect to faith that we often overlook

Faith is one of the most important parts of Christian life. It’s essential for experiencing a flourishing relationship with Jesus, is given as the reason behind several healing stories in the Bible, and provides the basis for being in right standing with God. Faith is usually understood to be a trust in God along with beliefs about who God is and what God has done and promised to do. But there is another part to faith that, despite Jesus regularly praising people for having it, is often overlooked. This is the perseverance and resilience of faith.

To find examples of the resilience of faith, some commentators have focussed on a set of narratives in the Gospel of Mark. One of these is the woman with a haemorrhage (5:24–34). Not only has the woman suffered from “a discharge of blood” for a crippling time of twelve years, but has "suffered much under many physicians" and "spent all that she had" trying to fix her illness. Her condition may well have left her with severe anaemia, including the tiredness and headaches that accompany it. But despite the disappointments of failed surgeries, financial hardship and debilitating symptoms, she follows Jesus through "a great crowd" that "thronged about him" so as to touch his garments and "be made well". This would have been intimidating for someone in her condition, and unlawful too, given Jewish prohibitions on mixing the sick with the pure, and those that prevented women from touching men from outside their own family. When Jesus tells this woman, "Daughter, your faith has made you well", it’s not simply her trust in Jesus, but the resilience of her faith to continue in her trust despite the many significant obstacles she has faced and overcome, that he commends.

Jesus commends the perseverance of the faith of several other characters as well. In the story of the healing of a blind man (10:46-52), Bartimaeus sits amidst "a great crowd", unable to see Jesus or be heard easily by him. Despite not being permitted to mix with those who are healthy and sighted, Bartimaeus puts aside fears of reprisal and calls out to Jesus. He is initially "rebuked" and silenced by the crowd, but continues to cry "out all the more" for mercy. Through Bartimaeus’ dogged perseverance, Jesus eventually acknowledges him and, restoring his eyesight, tells him: "your faith has made you well". Again, it is not just the trust Bartimaeus has in Jesus, but the resilience of that trust for which his faith appears to be commended.

In the story of the healing of the paralytic (2:1-12), the friends are so determined to get to Jesus despite there being "no more room, not even at the door", that "they removed the roof above" Jesus. Seeing this show of resilient faith, Jesus forgives the sins of the paralytic and heals him. Two chapters on (4:35-41), and Jesus is getting into a boat with his disciples when a storm arises and begins to fill the boat with water. Facing this severe threat, the disciples become afraid and wake Jesus so that he will calm the storm. Jesus rebukes them for their fear, and asks them why they still have "no faith", apparently challenging their inability to hold on to their trust in Jesus when obstacles come to threaten that trust.

What these narratives reveal is that faith is not just about trust or belief, but, as some commentators have noted, it’s about resilient and perseverant trust and belief. It’s a resilient faith which perseveres that Jesus regularly commends people for having and criticises for lacking.

But how, and in what ways, can faith be resilient?

If we look at how resilience is understood in psychological studies, as I have done in my own research, then there are four main ways by which we can view faith as resilient.

First, it can be resistant to obstacles to keeping hold of your faith. The fact that the woman with a haemorrhage had to live for twelve years with her condition is a challenge to still trusting in God to heal her, and yet she kept hold of her faith.

Second, faith can be persistent in the face of opposition. Bartimaeus doesn’t allow the crowds to silence him – he persists in expressing his belief that Jesus can heal him by calling out to Jesus until Jesus acknowledges him.

Third, faith can bounce-back after being lost for a time. Some of Jesus’ disciples may have begun to develop a fledgling faith in him as the Messiah by the time of their fateful boat trip, which may have temporarily been lost at the moment when their lives were at risk, only to start to be rebuilt again after they see Jesus calming the storm.

Fourth, faith can adapt and mature as circumstances change and one has new experiences. Perhaps the paralytic and his friends trusted Jesus to heal him, but not to forgive his sins. Their faith can be resilient by adapting to the belief that Jesus, as healer and forgiver of sins, is in fact the Messiah.

These four ‘secular’ models of resilience can be used as a lens through which we can understand our own faith in the church today. There can be many obstacles to trusting God, including suffering and being let down by others. Some internal resistance to these challenges can be helpful. But we also need regular encouragement alongside others through prayer and worship to motivate us to be persistent in trusting God. At times, our faith may wane and even be lost for a season. But resilience enables us to bounce back and regain it. This may take the form of a modified or adapted faith – perhaps even a ‘reconstructed’ faith – where we let go of certainty on peripheral issues and just focus on what is important: Jesus, love and the cross. In this way, adaptive resilience allows our faith to mature and pave the way for a flourishing relationship with God – one that Jesus would commend.