The Ukrainian roots of Britain’s favourite hymn, ‘How great thou art’

Consistently voted one of the most popular hymns of all time, ‘How great thou art’ was translated from Russian by Stuart Hine. The British missionary first heard the song in the Ukrainian mountains. 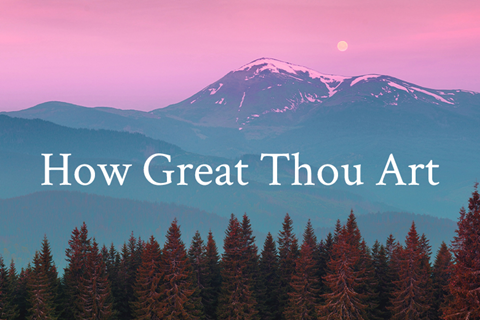 Stuart Hine was a missionary to Poland during the interwar period, in the 1920s and 30s. He and his wife spent many years in Eastern Europe, devoting their time to sharing their faith with the people they met. Part of that time was spent in the Carpathian Mountains (pictured, above) in what is now Ukraine. They travelled by bike to remote mountain villages, got to know the people there and shared their faith.

Hine was an incredibly inspirational man. How do I know that? Because after the second world war, when he had returned to the UK, he became my parents’ youth leader and, in many ways, their mentor in their Christian faith.

I grew up being told stories about Stuart, his wife and his family, and all that they’d experienced; of how he had practiced his hymns on their youth group, and encouraged them to do things which were beyond their comfort zone – much like Stuart’s own missionary adventures to the Ukraine and, many years later, my own. Through those stories, and my trips to Ukraine, I developed a deep love for the country and it’s people.

‘How great thou art’ was inspired by Ivan Prokhanoff’s Russian language hymn ‘Mighty God’ (itself based upon Swedish poem, O Store Gud by Carl Boberg). Hine first heard the song sung while in Ukraine and a paraphrase of it forms the first two verses of the hymn that is so widely known today.

Over the next fourteen years, he added four further verses of his own, and first published it in his gospel magazine Grace and Peace in 1949. Since then, there have been over 1,700 documented versions of the song recorded, including Elvis Presley’s famous 1967 version (and album of the same name) and it has been sung by performers including Dolly Parton, Cliff Richard, Jennifer Hudson, Carrie Underwood and John Mayer. It has been consistently voted one of the most popular hymns of the 20th Century.

The third verse of the hymn was inspired by Hine’s observations of the joy with which the Ukrainian people received and responded to the gospel of Christ. It was based on his own experience in those remote Ukrainian villages in the Carpathian Mountains. The fourth verse, which begins: “When Christ shall come / With shouts of acclamation” is very much looking to the future.

After the second world war ended, Hine spent some time looking after refugees who arrived in Britain and were separated from their families. That fourth verse is dedicated to them - to the refugees who didn’t know when they’d see their families again. It’s a verse full of hope, a verse that looks to the future. The two final verses are often not usually sung. But in this moment, as the conflict in Ukraine continues to rage, it seems particularly meaningful:

When burdens press, and seem beyond endurance,
Bowed down with grief, to Him I lift my face;
And then in love He brings me sweet assurance:
‘My child! for thee sufficient is my grace’

In this current time, my heart goes out to my many friends and contacts in Ukraine. I am in contact with them daily. Some have had to flee for their lives, some remain trapped in their homes. Others are receiving people and responding to their needs. My prayer is that peace will return and that the nation of Ukraine will experience the joy which only Jesus can bring.

I pray that God will move in his people and protect them. But more than that, I pray he will be with people across the region – in Russia, Belarus, Ukraine and all the countries receiving refugees. May God move in those situations, may he bless the people there and may he bring about a change, so that his will is done in Eastern Europe.