The Bishop of Oxford, Rt Rev Dr Steven Croft has come out publicly in favour of the Church of England changing its doctrine of marriage to include same-sex partnerships. But having studied the bishop's 48-page booklet, entitled Together in Love and Faith, Ian Paul believes the arguments are unconvincing 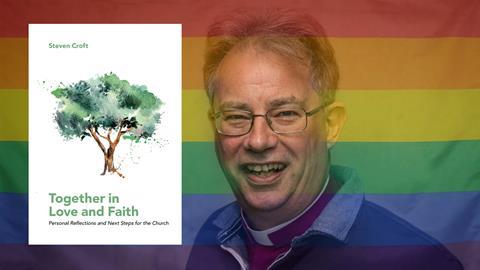 There are many surprising things about Bishop Steven Croft's argument in Together in Love and Faith, and these perhaps offer some insight into where the Church of England has got to in its long discussions about this question.

The first surprise is in his timing. The CofE has been engaged with long and tortuous discussions of this issue, going as far back as the late 1970s. Synod engaged in ‘Shared Conversations’, but then decided by a narrow margin not to ‘take note’ of the bishops’ conclusion the light of this, in 2017, which led to this last phase of Living in Love and Faith.

Last month, the bishops had the first of three meetings concluding this process in order to bring a proposal to the February session of General Synod - and right in the middle of this process of discussion, Steven Croft produces his proposal.

It is hard to know how to interpret this: it is a sign of desperation? Or an attempt to seize the initiative? Either way, the timing is odd.

The second surprise is the title: Together in Love and Faith. Croft is clear that his proposal will bring division to the Church - hardly something we need right now given all the pressures we are facing - and proposes a form of structural differentiation between those of different views. It is an odd thing to hear, given that, according to the ordination vows that bishops take, they are to “strive for the visible unity of Christ’s Church” as we gather around "the doctrine of Christ as the Church of England has received it.” Someone charged with uniting the Church is clear that his views will now divide it.

The remaining surprises come in the shape of the argument that Croft offers.

He claims that the Living in Love and Faith process has demonstrated that "most" people in the Church would like to see change. But those who have been managing the process deny this is the case or that this was ever the intention - and since when was the doctrine of the Church decided by referendum?

Someone charged with uniting the Church is clear that his views will now divide it.

He describes himself as an "evangelical", but then explains that the teaching of scripture in this area, as it has been most commonly understood, was becoming a hindrance to his "vocation as a priest and pastor and evangelist". This is quite an odd thing for an evangelical to say - but in fact just as odd for a bishop in the Church of England, since the consistent view of the Church is that scripture is a resource for ministry, which equips, rather than hinders, us.

The world vs the church

He starts the main part of his argument with another very surprising claim: "We now have a profound dislocation between the Church of England...and the society we are called to serve…We are seem to inhabit a different moral universe." (p.20)

Most Christians would think that "inhabiting a different moral universe" from surrounding culture was core to being a disciple of Jesus, not a problem that inhibits our witness. Croft’s comment appears to completely ignore the profound discontinuity we often find in scripture between "the world" and the people of God, the radical difference that the kingdom of God brings, and the contrast between the "works of the flesh" and the "fruit of the Spirit" in Paul.

There was a wonderful irony in the timing of Croft’s report. It came out on the day when the Church of England was reading about the faithfulness of Shadrach, Meshach and Abednego in Daniel 3, and the lukewarmness of the people of God in Laodicea in Revelation 3 - and the collect for the week entreated that God would enable us to "reject the world’s deceits"! As one Anglican minister observed wryly: "I look with interest to seeing the Bishop’s defence of extreme patriarchy in the Middle East, the defence of the caste system in India, and of polygamy in Africa for ensuring that Anglicanism remains consistently and universally against radical cultural dislocation…"

Croft then says some very surprising things about sexuality. First, he claims that sexual orientation is ‘genetic’, which is an extraordinary claim, completely at odds with all the research literature in this area. How could something as complex as our sexual interests, desires and relationships be genetically determined? The evidence shows that parenting, experience, and environment all contribute to our psycho-sexual development, and that, at various stages of life, particularly for women, same-sex attraction is quite unstable.

Related to that is another astonishing claim: that if a desire in us is experienced as ‘innate’ rather than being a ‘choice’, then it could not be wrong to follow that desire into action. You don’t have to think about the range of human desires and passions for more than a minute to realise what an extraordinary claim this is.

As Croft turns to the reading and interpretation of scripture, we encounter another series of surprising claims. He writes, "Repeatedly in the gospels, judgement and mercy are brought into contrast with one another [and] in every instance, Christ prefers and privileges mercy, grace and gentleness." (p.28)

There is no doubt that the grace of God is revealed to us supremely in the person of Jesus - but what does that grace look like? The synoptic gospels agree that the core of Jesus’ teaching was that "the time is fulfilled, and the kingdom of God is at hand: repent, and belive the good news" (Mark 1:15; Matthew 4:17). God’s grace is known to us by the gift of new life, which rescues us from coming judgment, and involves a complete change of life in response to God’s mercy and call to holiness. In one of his summary statements, Luke cites Jesus’ defence of his ministry in these terms: "It is not the healthy who need a doctor, but the sick. I have not come to call the righteous, but sinners to repentance." (Luke 5:31-32)

Jesus looks at us, and calls us ‘spiritually sick’ people who need a ‘doctor’, and the result of our treatment will be that we repent of our sins. This probably doesn’t sound like ‘gentleness’ to our ears, but it is at the heart of Jesus’ ministry.

Even more startling is Steven’s next claim - that Jesus was "largely silent on the matters of human sexuality". Curious then, that in the Sermon on the Mount in Matthew 5, he chooses to put questions of sexual propriety as the second and third specific issues he addresses, in between murder and lying as core issues relating to discipleship. Curious too that, when the question of food laws and impurity arise in Mark 7:21, Jesus talks of the "evil thoughts" which come from the heart and defile people, and lists three things related to sexuality amongst the twelve, in first, fourth, and eighth position in his list. It is clear that sexual ethics mattered to Jesus!

It is true that Jesus did not respond directly to the question of same-sex relations - because no Jew would need to raise that question with him. Rejection of all same-sex sex, in whatever context, was a uniform conviction in first century Judaism, and it was one of the main things (along with Sabbath observance, food law, and circumcision) which marked Jews out from Gentiles. He does, though, in response to the question of divorce in Matthew 19:3-6, go out of his way not just to focus on marriage, but to focus on God’s creation of humanity as male and female as the basis of marriage - exactly the issue that Paul picks up in Romans 1.

Croft offers a cursory reading of Levitical texts on the basis of the fictional conversation in The West Wing, which is a bizarre way for a bishop to do theology; Croft’s claim that "everything has changed" so we pay no attention to Old Testament commands and ethics is breathtaking. What is strange is that, every week in Confession in Communion in the CofE, we are reminded of Jesus' summary of the greatest commandments - one of which comes from Deuteronomy, and the other from Leviticus, right between the two prohibitions on same-sex sex.

His discussion of the Pauline terms in 1 Corinthians 6:9 and 1 Timothy 1:9 follows the discredited readings of people like gay New Testament scholar Dale Martin (who goes on to argue that all forms of sex can be ‘Christian’) and appears to be out of touch with the mainstream consensus. US New Testament scholar Luke Timothy Johnson is representative of the vast majority of (critical) scholarship: "The task demands intellectual honesty. I have little patience with efforts to make Scripture say something other than what it says, through appeals to linguistic or cultural subtleties. The exegetical situation is straightforward: we know what the text says. But what are we to do with what the text says? I think it important to state clearly that we do, in fact, reject the straightforward commands of Scripture, and appeal instead to another authority when we declare that same-sex unions can be holy and good."

Croft signs off the discussion of scripture with comparison between the debate about marriage, and previous debates about the ministry of women and slavery - but does so without actually attending to the very different nature of the issues, the biblical texts involved, and the differing things those texts say. In particular, he avoids the obvious reality that, on these other issues, the texts appear at first to pull in different directions. By contrast, on the question of male-female marriage and the implications for same-sex relations, the biblical texts are univocal.

He claims that the trajectory of justice requires that we reject the teaching of scripture on marriage - but fails then to notice that neither Jesus nor Paul, nor any of the Old Testament prophets, with their insistent focus on justice, believed that the one followed from the other. He appeals to the Council of Acts 15, but ignores the fact that the Council’s decision was made in the light of scripture, not in defiance of it, and that admission of the Gentiles fulfilled Old Testament prophecy of God’s eschatological goal. Slightly inconveniently, the Council also ask that one of the key Old Testament commands they adhere to is that of avoiding sexual immorality, which would of course have included same-sex sex.

Croft ends by claiming that same-sex sexual relationships have born "good fruit", even though Paul contrasts the fruit of the Spirit with "works of the flesh" which include "sexual immorality" (Galatians 5:19), which for Paul would have included same-sex sex. Croft appears not to have noticed that, consistently around the world, churches which have changed their understanding of marriage have accelerated in their decline, while it is those churches who have kept faith with the consistent understanding of the clear teaching of scripture on marriage that have grown.

In some ways, Croft’s intervention might significantly shape the Church of England’s decision on this. If these are the best arguments that someone can offer for change, and they are so poor, then the case for change appears to have been lost.