Why did God send angels to minister to Jesus?

In her debut column, Dr Lucy Peppiatt wonders why Jesus needed something more than the Holy Spirit to comfort him in the desert 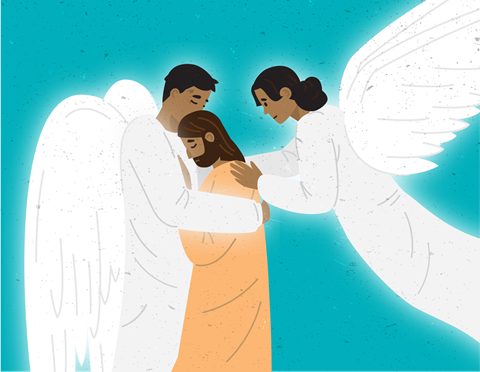 It’s funny how the idea of angels has entered into the popular imagination. Even those who have no faith in God, or who have never read the Bible, are often willing to believe that angels exist and that they are sent to look after human beings in some way – guardian angels watching over us, perhaps.

In Matthew’s Gospel we’re told that Jesus spent 40 days in the desert with no food, no shelter and presumably no means of bathing. He may have experienced a strange kind of spiritual alertness that comes with fasting but we can assume he was also physically tired, hungry, dirty and dusty. Matthew ends the narrative with: “Then the devil left [Jesus], and angels came and attended him” (4:11).

These ministering angels raise many questions. What did they do for Jesus when they cared for him? Did they bring food and water? Did they bathe and clothe him? Did they also soothe him emotionally, pray with him, sing to him, even? We can’t know exactly, but this verse demonstrates something profound about the nature and economy of God.

One of the things I find interesting is that the angels are an added extra to the presence of the Spirit. Jesus had already received the Spirit at his baptism (Matthew 3:16) – he had the Comforter with him so that he could be strengthened for the ordeal of the desert.

Yet God the Father didn’t leave him with only that. Through the gift of the angels’ presence, Jesus was given something more tangible. God could have sent ravens to bring him food and water, or provided sustenance another way, but instead he sent angels. What does this tell us?

First, it is yet another window into the fully human nature of Jesus Christ. The divine Son, when he came to earth, never ceased to be the divine Son. He has the very nature of God and yet he chose to live his life on Earth in exactly the same way as we live ours, but without sin.

He experienced all the physical weaknesses, natural impulses, frailty, pain and neediness of the human condition. We can assume the 40 days that he spent hungry and exhausted in the desert would have been as punishing for him as it would be for you or I.

I always tend to think of Jesus as the strong one. He is the one who strengthens, comforts and draws alongside the sheep to save, rescue and heal. He is the rock, the one we lean on. And yet in the wilderness God sent angels to care for him.

We don’t know a lot about angels from the scriptures. We know they can appear to us as very like humans or more divine. We know they are intermediaries between us and God, and that God normally sends them to humanity as messengers (‘angel’ is sometimes translated as ‘messenger’). In this instance, however, they had a caring and protective role.

In the desert we see God himself receiving ministry

We know angels can care and protect, as the devil reminded Jesus in Matthew 4:5, taunting him with a quote from Psalm 91: “‘He will command his angels concerning you, and they will lift you up in their hands, so that you will not strike your foot against a stone.’” Psalm 91 is a song that expresses – more than any other psalm – the promise of God’s protection: “‘Because he loves me,’ says the Lord, ‘I will rescue him; I will protect him, for he acknowledges my name…With long life I will satisfy him and show him my salvation’” (v14-16).

Surely this should be true for the beloved Son of God and yet, when it comes to the point of mortal danger on the cross, Psalm 91 doesn’t ‘work’ in the way it seems to promise. Of course, the Son could have called on his Father to send the angels again to save him from death, but he didn’t. The Father, Son and Holy Spirit agreed that he would go through death and triumph over it for the sake of the world. The angels came afterwards and the women found them waiting at the empty tomb. What does this tell us of God and us?

We know that we, like Jesus, are not spared the ordeals and hardships of life. We often find ourselves in a desert, but in Matthew we see God’s willingness to care and protect even when we are exposed to hardships. Jesus spoke about himself as “one who serves” (Luke 22:27), but in the desert we see God himself, in the Son, receiving ministry.

We see the practice of ministering and serving woven into the fabric of a universe where God the Father and God the Spirit sent angels to serve God the Son. This means that we don’t always have to be stoic and brave, but can also receive care when we need it.

Sometimes we think that being brave is a virtue. If we don’t crumble under pressure, then we’re strong. In Christian terms we might think this demonstrates how firm we are in our faith. But God cares for us in our vulnerability and need – and promises that in our weakness, he is our strength. We don’t have to prove that we’re not weak, we just have to be weak and he will help. Even Jesus admitted his need for care.

The damage that can be done to our minds, hearts and emotional wellbeing by a lack of physical touch is well documented among babies and children. Physical touch, such as hugs from people who love and care for us, is as important for the healing of our souls as the presence of the Spirit of God. If Jesus needed this after his ordeal, how much more should we care and be cared for in our times of need?

Lucy PeppiattDr Lucy Peppiatt is a systematic theologian and the principal of WTC (wtctheology.org.uk) where she teaches classes in Christian Doctrine and Spiritual Formation. She has authored books on discipleship, women in the Bible, and humanity made in the image of God. She lives in Bristol where she and her husband, Nick Crawley, are pastors at Crossnet Church