Christians are called to be peacemakers, not peacekeepers, says Anita Delhass, as she argues a disruption of the status quo may be required in order to allow real peace to prevail 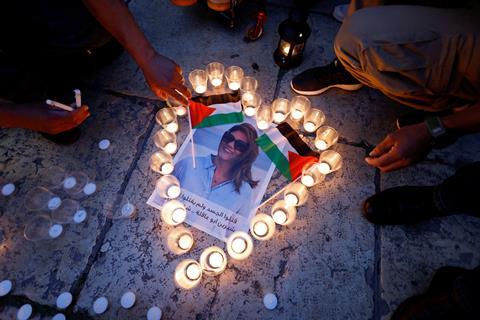 People light candles during a vigil in memory of Al Jazeera journalist Shireen Abu Akleh, who was killed during an Israeli raid, outside the Church of the Nativity in Bethlehem (REUTERS/Mussa Qawasma)

Kind, humble, smart, passionate, funny, professional, and most of all an example of a ‘human journalist’.

These are the words used to describe Shireen Abu Akleh. Only 51, and in the prime of her career as a journalist for Al Jazeera; Shireen was shot and killed while covering a raid by the Israel Defense Forces (IDF) on civilians at Jenin refugee camp in the West Bank on May 11.

Shireen was a respected and familiar face in the Middle East, known for her coverage of the harsh realities of Israel’s open-ended military occupation of the Palestinians, now in its 55th year. The manner of her death and the violence that occurred at her funeral, has caused widespread condemnation of Israel.

The Greek Patriarch of Jerusalem, the Latin Patriarch in Jerusalem and the Bishops of the Holy Land have condemned the violent intrusion of the Israeli Police into the funeral procession. Moreover, the churches within Jerusalem are pleading for more awareness of how Christians are under threat.

Although freedom of religion is promoted in Israel, the minority Christian population in the Palestinian territories experience fewer freedoms; properties owned by Christians are illegally squatted by radicals and they are evicted from their homes.

We are not peacekeepers

In these times when peace so often seems to elude us, the distinction between ‘peacekeepers’ and ‘peacemakers’ has become increasingly vital.

During my many visits to the Holy Land, I have concluded that peacekeeping can actually be the opposite of peacemaking.

Peacekeepers’ ambition is to keep the peace - at all costs. As a result, they can often avoid the discomfort needed to solve issues at the core and instead focus on maintaining the status quo.

Quite frankly, the status quo of our world needs to be broken, and ‘keeping the peace’ isn’t enough.

Peacemakers, on the other hand, can be disruptors. They recognise that sometimes, they need to disrupt the status quo to allow real peace to prevail. Peacemakers actively build peace; they speak up when it’s uncomfortable and step in where injustice has taken a foothold.

I have personally witnessed a community of Christians in Palestine enduring oppression, misery and humiliation. I have seen a Christian community once thriving, now so reduced in number that the idea of no Christians existing in the very birthplace of Christ is a reality.

How sad that in the birthplace of Jesus, his followers are no longer welcome!

It’s not lost on me the tragic irony that the very place where Jesus turned over the tables is now the very place where we, as Christians in the West, need to flip the proverbial tables over to disturb the peace of injustice that is occurring to the Christian communities in Jerusalem. In the same way that Jesus didn’t express tolerance on that day in the temple, neither should we be tolerant of the mistreatment of our brothers and sisters in the very place that Jesus walked.

Perhaps the best example I can think of when it comes to peacemakers, aside from Jesus, are his disciples. Being a peacekeeper would have meant never uttering Jesus’ name ever again; the political and religious leaders of their day would have preferred the peace be kept by forgetting that Jesus existed. But they didn’t walk that path; they disturbed the peace by becoming peacemakers - by sharing his peace with the world; creating a transcendent and perfect peace by spreading Jesus’ message. Without this, we quite literally wouldn’t know Jesus’ name today.

When done Jesus’ way, peace can literally be the opposite of safety.

Like many people, I have been saddened to see the dramatic reduction in Church attendance in the West, especially with younger generations deciding that Church is not for them. I can’t help but wonder whether peacekeepers have been part of what has held churches back, keeping the peace by stifling the Church from challenging the status quo and protecting power structures that keep out rather than being welcomed in.

I can’t help but wonder whether we need to disturb the peace much more so that we can create a greater sense of peace in our churches. This includes looking globally to understand where more peace needs to be built.

Anita DelhassAnita Delhass is CEO of ICOHS, a foundation that supports Christians in the Holy Land