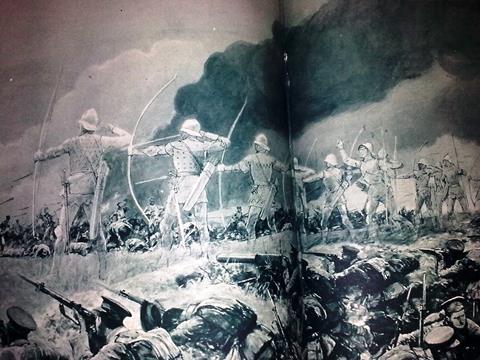 Many people will be aware that Britain escaped from disaster on a number of occasions in the second world war. There were sudden changes in the weather, inexplicable changes in strategy and tactics by the enemy as well as seemingly natural causes which combined to turn the tide of events. The best-known episode is the evacuation of the surrounded British and French forces at Dunkirk. This began on the evening of 26 May 1940, which was a national day of prayer.

Less well known are the turning points in the first world war. At the beginning of the war, in August and September 1914, and also in the spring of 1918, the war could easily have been lost.

There was a national day of prayer on 21 August, two days before the Battle of Mons, and we can assume that churchgoers were praying in their Sunday services on the day of the battle. Robert Cowley takes the view that: “If the long marches had gone as originally planned, Germany could have won. It should have won…”

There are many first-hand reports of supernatural visions associated with what became known as the ‘Angels of Mons’. What is striking is that some of the stories were from German prisoners who said they saw large forces behind the British lines that were not seen by the British.

There are also stories of a vision in April 1918, again seen only by German soldiers. This followed a long German offensive in March in the Somme area where the outnumbered British were forced to retreat, but eventually halted the German advance. The Germans could have taken Amiens if they had concentrated their forces.

Later, on 9 April, German troops were poised to break through the British front near Béthune, threatening the Channel ports. German soldiers on the offensive were said to have laid down their arms on seeing a unit of ‘white Cavalry’ which, despite heavy gunfire directed at it, advanced towards the German forces without loss. Captain C.L. Overton wrote on 10 April that “…six of us captured 85, they simply gave themselves up, I think our battalion captured over 400.”

The final turning point of the war occurred in August 1918. This followed a national day of prayer on 4 August. Lieutenant General William Dobbie, then a staff officer at headquarters (who signed the ceasefire telegram to troops ending the war), observed that up to that point the weather had favoured the German forces and he connected this with an absence of national prayer. On 8 August an Allied attack supported by tanks was helped by a ground mist resulting in zero visibility. The allies advanced eight miles that day. German casualties were 27,000 including 15,000 prisoners.

This victory heralded the end of the war in November 1918, though there were heavy casualties in the final months of the war. Contemplating the horror of the wars and the suffering of those at the front, as well as families and friends at home grieving for the lost, we should be cautious in thinking that we can easily understand the workings of providence. But if, as contemporaries saw it, there was divine intervention in answer to prayer, we should be thankful for this.

John ScrivenJohn Scriven read history and law at Trinity College, Cambridge, and served as a Captain in 6/7 Battalion (Territorial Army), The Queen’s Regiment. His books include Belief and the Nation (Wilberforce, 2013) and Beyond the Odds, Providence in Britain’s Wars of the 20th Century