Pat Robertson is retiring. Here’s the good, the bad and the ugly of his 55 year ministry

As one of America’s most controversial Christians retires from his influential position as host of The 700 Club, Tim Bechervaise considers the legacy of Pat Robertson 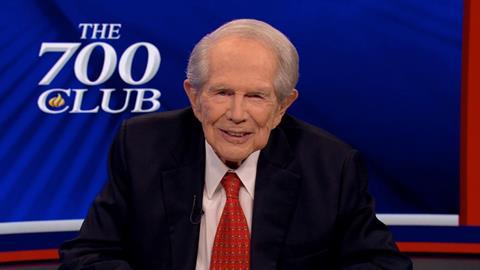 For some people, retirement is not in their vocabulary — and for many years, that seemed to include Pat Robertson.

He’s the 91-year-old founder of CBN (Christian Broadcasting Network), the first US Christian television station, and America’s longest-running TV host. But last week, Robertson told viewers of The 700 Club that, after 55 years hosting the programme, he was to step down, to be replaced by his son, Gordon.

There have been rumours that some at CBN have been urging Robertson to retire for years, or least pre-record segments, to avoid his susceptibility to on-air faux-pas! But now the momentous occasion has arrived for Robertson, whose career has not been without controversy.

The CBN network reaches 800,000 viewers in 174 countries. It’s an enormous reach that’s enabled them to not only transmit Christian content globally but conduct several humanitarian aid and relief programmes, including disaster relief and medical outreach through Operation Blessing.

Robertson is also founder of Regents University, where he will now focus most of time. (Even at 91, full-time retirement is not an option!) The university - which Robertson founded in 1977 - has an alumni of 27,000 people, and today a further 11,000 are pursuing professional qualifications in a variety of fields, such as law, nursing, science and communication, all through a Christian perspective.

In 1990, Robertson began the American Center of Law and Justice (ACLJ), which seeks to “protect religious and constitutional freedoms” with a focus on “pro-family, pro-liberty and pro-life cases”.

The 700 Club began as a telethon to save WTOV-TV - a Christian channel owned by CBN on the verge of closure - with the aim of getting 700 people to contribute $10 per month. The target was reached and Robertson called these members ‘the 700 club’. The name stuck and, four years later, The 700 Club began broadcasting nightly for two hours, featuring music, interviews, prayer, preaching and Bible study.

These are fairly innocent beginnings, but the title’s focus on money hints at an inclination towards prosperity teaching. This is highlighted in a book released in 2017 by Terry Heaton, a former producer of The 700 Club. In The Gospel of the Self: How Jesus Joined the GOP (GOP, or Grand Old Party is another name for The Republican Party), Heaton says the show was edited in favour of a marketable approach, which included presenting the Bible as a ‘self-help manual’.

Pat is a politician who happens to be a minister

Heaton is balanced in his remarks on his former boss, adding that Robertson was among the first to call him to pray with him when his wife died in 2006. It should also be noted that, despite his relationship with Donald Trump, Robertson didn’t shy away from calling on him to accept Joe Biden’s presidential victory in 2020. (This stood in start contrast to some of Robertson’s contemporaries who refused to accept the outcome of the election)

But in a telling remark, Heaton said, “Pat is a politician who happens to be a minister.” Robertson even ran for presidency in 1988. This is no bad thing in itself, but given the platform of CBN as a Christian-based station, perhaps more should have been done to keep a stronger separation of faith and politics.

Pat Robertson is not shy of airing his opinion - a trait that’s sometimes got him into trouble.

Such is his influence and fame, that the name ‘Pat Robertson’ has become synonymous with fundamentalist evangelical Christianity in America.

In an episode of The 700 Club in the week of 9/11, Robertson said “I totally concur” with Rev Jerry Falwell’s comment that, “I really believe that the pagans, and the abortionists, and the feminists, and the gays and the lesbians who are actively trying to make that an alternative lifestyle… all of them who have tried to secularise America, I point the finger in their face and say, ’You helped this happen.’” Falwell later apologised.

In 2005, Robertson said that the US should kill then-Venezuelan president Hugu Chávez. “If he thinks we’re trying to assassinate him, I think that we really ought to go ahead and do it,” said Robertson, who later apologised after his comments were roundly condemned.

Five years later, Robertson claimed that the Haiti earthquake was a consequence of the country’s founders having a “pact to the devil” in order to free themselves from the rule of French colonisers in the 18th century.

There have been other highly inappropriate comments. He once told the story of an “awful-looking” woman who said to a minister that her husband was drinking heavily, to which the minister said it was likely because she had put on weight and neglected her hair. “We need to cultivate romance, darling!” said Robertson, who has dismissed feminism as “a socialist, anti-family political movement that encourages women to leave their husbands, kill their children, practice witchcraft, destroy capitalism and become lesbians”. In 2011, Robertson said a man whose wife has Alzheimer’s “should divorce her and start all over again”.

What is to be made of Pat Robertson’s career? His political and theological stances - together with his insensitive comments - will have put off many people. It’s worth pausing to remember that when Robertson is outspoken, it’s not just Christians who hear about it, but the wider world. Even if its true that some media outlets are eager to spread bad news about Christians, the sad fact is Robertson has given them ammunition on too many occasions.

Robertson will always have his critics, and given that some of his past remarks are frankly indefensible, that’s not surprising. At the same time, his ministry has changed many people’s lives for the better. Christians have been enriched by many of the interviews, testimonies and biblical insights aired on The 700 Club, and it’s likely that will continue for years to come, even as he passes on the presenting baton. This is not to excuse his errors, but on top of calling out wrong behaviour that harms our collective witness, we should also give credit where it is due.